Self proclaimed Chinese tech analyst, Pan Jiutang, has taken to Weibo with his thoughts on which phones to use the latest Qualcomm Snapdragon 810 processor. Here is what he came up with.

Pan Jiutang, is quite a vocal member of Weibo and often has something to say about upcoming Chinese tech. After the official release of the Snapdragon 810, the Chinese analyst took to Weibo with his claims at which Chinese smartphone maker will be the first, possibly in the world to use the chipset.

His final choices included the Oppo Find 9, Vivo Xplay 5, and the Xiaomi Mi5. Now, based on what we know of the way Chinese tech launches, we would say that the Vivo Xplay 5 is most likely going to be the first of the 3 to get the processor, followed by the Find 9 and then the Xiaomi Mi5 much later in to 2015. The Vivo Xplay 5, will probably launch in around December of January in time of the Chinese Spring Festival. 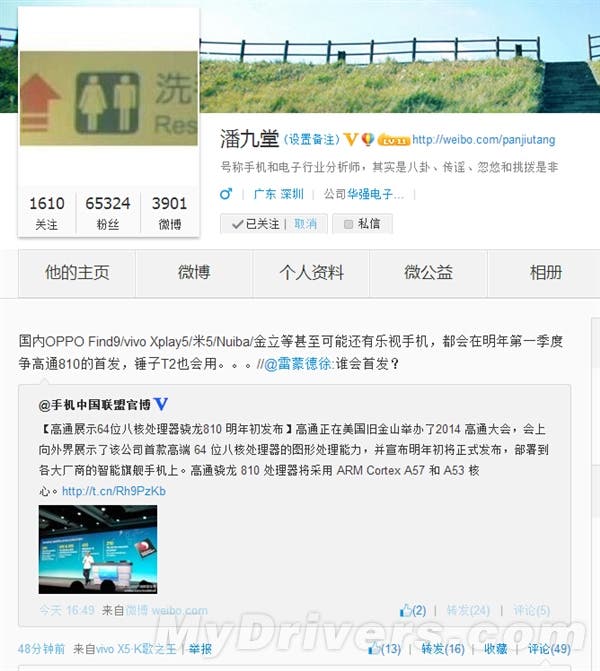 With that said though, there is one other phone maker who could be first. It’s a long shot but we have a feeling that IUNI have another phone up their sleeve which will launch at the end of the year. Although the company is small, its ties to Gionee would give them some sway at Qualcomm and we might just see the IUNI U4 pack an 810.

So what about the Snapdragon 810? What does it have to offer? Well we know that the 810 will be an 8-core processor and will use a big.LITTLE architecture to switch between cores based on usage to boost battery life. The SoC will be capable of 4K video have an Adreno 430 GPU, and will have LTE capabilities too. Qualcomm’s use of an 8-core processor is interesting as earlier this year they published a video teasing Mediatek for their octacore processors and how they simply weren’t necessary.

Thanks to Simon for the tip.

Next OPPO R5 glimpsed while on way to the Indonesian market