OPPO camps are abuzz with N3 talk, but from what we just treated our eyes to, there’s more coming from the company than just that.

The OPPO R5 is what could launch very soon. The device was spotted on the regulatory body, Postel, for Indonesia. Postel can be thought of as the Indonesian equivalent of China’s TENAA and USA’s FCC. 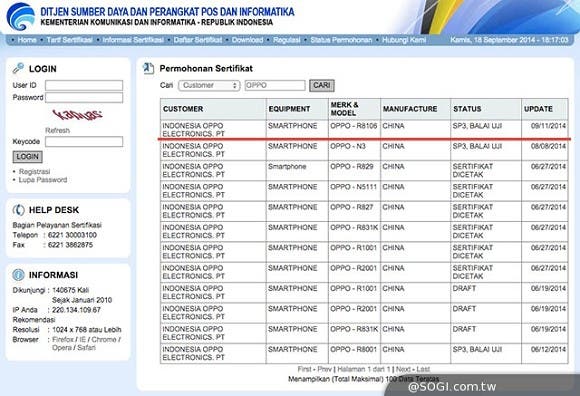 R series devices from OPPO are usually known for their sleekness, and we wouldn’t be surprised if the R5 does something similar. What’s new is that the phone will come with 4G LTE connectivity out of the box, so it’ll be interesting to see what sort of internals the device gets. Slim phones often tend to return poor battery life in lieu of eye candy.

Whatever it is, we have a feeling launch isn’t too far. OPPO could be preparing to launch this alongside the N3 which is due 29th October, or perhaps even sooner to keep the ball rolling.

In related news, OPPO launched the R1L some days back. Read more about the R1L here.

Previous Vivo Xplay 5 could be the first phones to use Snapdragon 810, others to follow