OPPO’s really turning into a master of teasers and hype. Something that you have to give the company credit for, though, is the fact that they’ve been on the forefront of technology almost each time — the OPPO Find 5 was one of the first (if not the first, as claimed by OPPO) 1080p smartphones, and the N1, first with a swivel/rotating camera. Word on the street is that the N3 will have one too, but this time, in a mechanized/motorized avatar. 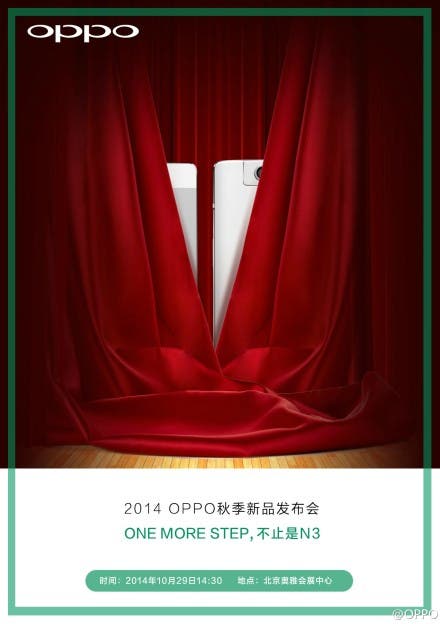 The company today shared a teaser, that showed a couple of devices partly hidden behind curtains. While we’re pretty certain on of those device (right side) is the OPPO N3, we have not the slightest clue as to what phone/gadget it is accompanying the N3. A handful pictures of the long-rumoured Olens did show up some time back, but the form factor of the device in this teaser simply doesn’t look like it’s the Olens.

If you aren’t aware, the N3 is expected to launch on the 29th this months — which means there’s just 5 days to go — at double events in China and Singapore. We were already pretty kicked about getting to see the new OPPO, but this teaser has instilled another level of excitement in us; after all you expect something new and out of the box when it’s OPPO you’re talking about.

What do you think this ‘other device’ could be? Could it be the 4mm thin phone we just reported about?

Previous Oppo could be ready to launch a 4mm thin smartphone