Earlier today in China, Vivo launched their newest smartphone, and also the world’s thinnest phone to date! Here are all the details about the Vivo X5 Max.

Slim phones might not really be everyone’s cup of tea, but they do have their role. There are those who love a slim form factor most of all when choosing a phone, there is the media attention a company receives from a thin device, and there are also important manufacture and design rules learned from building one. So even if you are unlikely to buy t the 4.75mm Vivo X5 Max, chances are that similar small features and design elements make it in to next generation phones of all sizes. 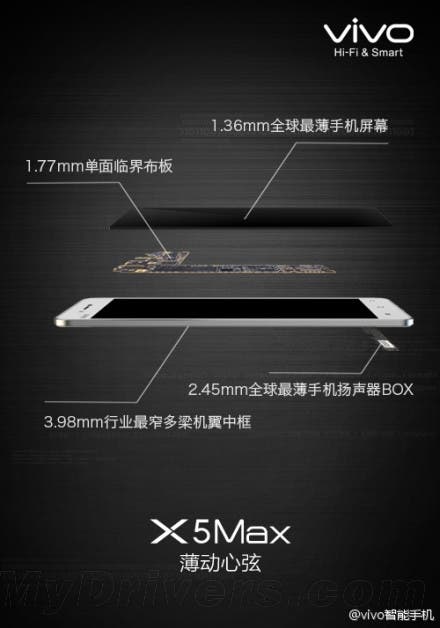 One element which we believe we are going to see more of is Vivo’s “one sided critical layout” which Vivo say allowed them to reduce the thickness of the X5 Max by 1.77mm. This design sees 90% of all the internal components fitted alongside the battery. The down side to this means the phone needs to be slightly wider than most recent 5.5-inch devices, but the upside is a thin phone with great rigidity. 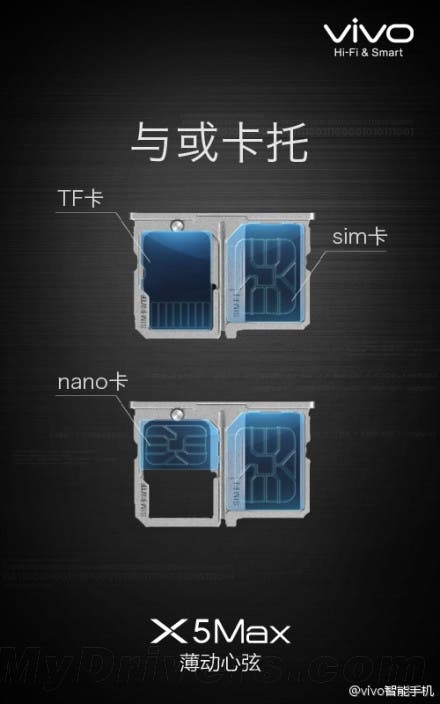 With a thin design and regular size headphone jack you would think that Vivo would have had to cut a few corners on the rest of the hardware, well think again! Vivo have managed to squeeze in space of a combination Micro SIM + Micro SD card tray (which can be ran with dual SIM if you remove the SD). 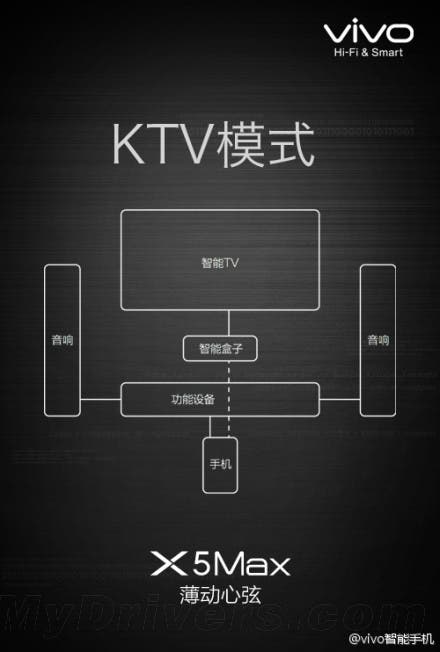 Vivo are famous for their HIFI Audio performance and for the X5 Max they had to design the world’s thinned BOX speaker with a thickness of 2.45mm! There is also a built in Yamahayss-205X chip on board to making this the first time an Android phone gets real-time vocal reverb sound. 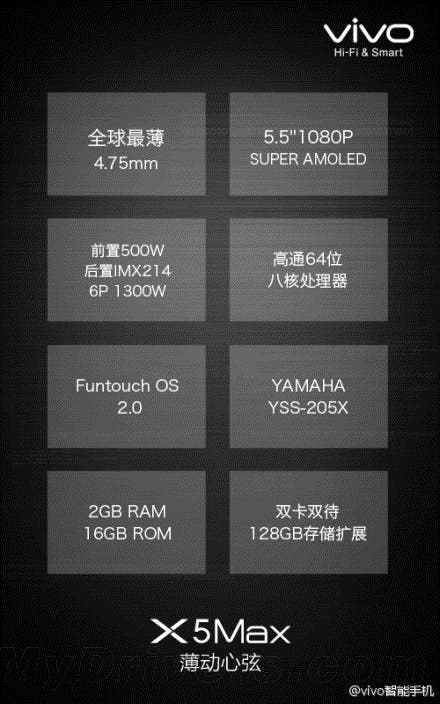 Inside the phone lives an octacore 64bit processor with support for LTE, but it isn’t the Mediatek MT6752 we had all believed it would and instead it is a Snapdragon 615 chips with 2GB RAM running Funtouch 2.0 based on Android 4.4.4. There is also 16GB of internal memory, and that SD card slot we mentioned before is compatible with 128GB cards.

As mentioned above the screen is a 5.5-inch panel that runs at a full HD resolution of 1920 x 1080, what’s more it is a SUPER AMOLED display for bright, colourful viewing and dark blacks.

Finally the camera set up includes 5 mega-pixel camera up front and 13 mega-pixel Sony IMX214 around the rear, which according to Vivo gives almost the same performance as the fantastic Vivo Xshot!

Understandably, but worryingly the Vivo X5 Max has a battery size of only 2000mAh! That’s quite a concern considering the bright AMOLED display and LTE! A full review will hopefully reveal the actual battery life.

If you were interested in buying the Vivo X5 Max it has launch in China for 2998 Yuan, and will also officially go on sale in other Asian countries and India too. Thanks to Realjj for the details!

Also keep your eyes peeled for the Vivo X5 Max review coming to GizChina next month!

Previous Exclusive: hands on photos with the Vivo X5 Max

Next MXQ S85 wants a place under your TV this Christmas