Ulefone have publicly apologised to fans for advertising their Ulefone Be Pro with the wrong camera specifications.

Earlier this week we were alerted by owners and users of the Ulefone BePro that the camera specifications listed by Ulefone were not the same as those on the phone they are shipping. In Ulefone’s promotional material the camera is listed as a 13 mega-pixel Sony sensor, however it was later uncovered that the phone actually ships with an 8 mega-pixel sensor.

We reached out to Ulefone to ask what was really going on and received a letter of apology stating that the marketing team involved in creating the promotional material of the Ulefone Pro had listed te wrong specifications, and in fact the Be Pro is manufactured with an Omnivision 8 mega-pixel sensor instead.

Ulefone have also posted the apology on their Facebook page here. The response from customers is a 50:50 split with some fans angry with the misinformation, while others are impressed with Ulefone’s honesty and remain happy with their phones. 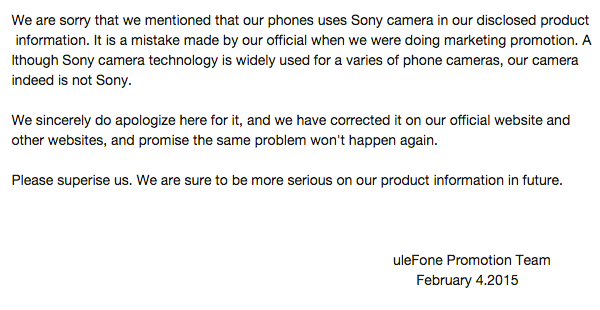 Have you been affected by this? How do you feel about Ulefone and their apology? Do you have the a Be Pro and can you comment on the photo quality?

Next week I will be fully back to work and will be able to begin work on the Ulefone Be Pro review so stay tuned!

Next Huawei Honor 6 Plus Review