Many, including a few from the GizChina staff, have regarded MediaTek as the chipset fabricator to watch out for this year. The Taiwan based major has already thrown a couple of surprises at us — the MT6732 and MT6752 64-bit SoCs. Late-ish last year, we also saw the MT6595 which powered the beautifully awesome Meizu MX4 (read review), and that one too turned out to be more than just a handful.

The next SoC from MediaTek that we’re all waiting to see is the MT6795. We naturally have our expectations high after seeing what the ‘entry-level’ MT6732 and the ‘mid-range’ MT6752 could do. According to a listing on the GFXBench database, we might just not have to wait too much. A device, complete with an MT6795 SoC, 3GB RAM, 32GB ROM and 2K screen, might just have passed the GFXBench test.

The device has a code-name ‘k6795v1_64’, and is powered by a 1.9GHz octa-core CPU from the MT6795. Besides the aforementioned hardware, the phone is also listed running Android 5.0 Lollipop, which is a first for MediaTek; if the phone runs Lollipop out of the box, that is.

Although a 2K screen (4.6-inches according to GFXBench) gets a mention on the listing, we aren’t completely convinced about that bit because GFXBench is known to mess around with these numbers sometimes. Take a look at the screenshot below for more information. 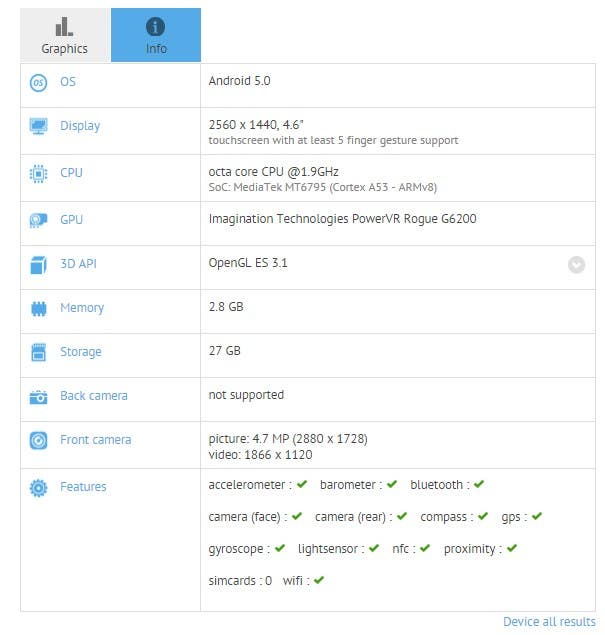 Next ZTE Blade S6 now on pre-order in Malaysia