Although Xiaomi had been pretty successful with the Mi series of phones, it was the original Redmi (formerly known as the Hongmi) of 2013 that really sent a message across the world, about this little known Chinese brand that was already a big name in its home country.

The 799 CNY phone sold like hot cakes, with international customers happily paying up to 2x the original cost of the phone. Xiaomi quickly followed it up with the Redmi 1S, about which you probably know pretty much everything by now. Last year, rumours about a Xiaomi-Leadcore partnership started showing up, and it appears as though the partnership finally bore fruit. 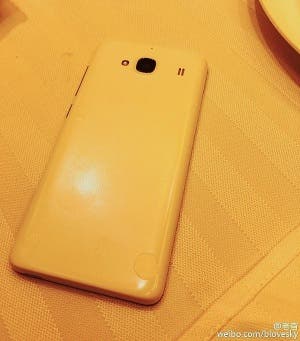 It is in the form of an ultra-inexpensive Xiaomi phone, which will most likely stand in between the original Redmi and the Redmi 1S in terms of specifications, and we believe will cost around $70-75. For starters, rumoured specifications of the phone include a 4.7-inch screen, Leadcore LC1860C SoC, 8 mega-pixel rear camera, 2 mega-pixel front camera, 1GB RAM and 8GB storage.

As you can see from the alleged leaked picture of the phone, the device (at least its rear) shares a lot of its design with the Redmi 2, the latest Redmi from Xiaomi.

Like mentioned before, the phone should be available for well under $100 if I’m not wrong, and availability should commence later this year. Xiaomi have already been hugely successful with their Redmi series, and haven’t done badly with their higher-end Mi series also… this could be the start of what Xiaomi plan to use to dominate the entry-level segment.