Anyone following Xiaomi’s latests moves will have seen that the phone maker have invested in Chinese SoC producer Leadcore who will likely supply processors for Xiaomi’s new phones, and one could have been shown off already!

At a mobile phone conference held in China today, Leadcore had a stand where a named Android device was shown running their LC1860 chipset. The LC1860 is the processor that Xiaomi are rumoured to use in their sub 500 Yuan phone next year, and is quite an impressive piece of kit!

The LC1860 is an LTE enabled chip that can handle up to 2K displays and other high-end features normally reserved for flagship processors. That’s not to say that the new Xiaomi will get those specs, but it does show the potential of the SoC.

Journalists visiting the Leadcore stand managed to get some hands on time with the mystery phone which has specification that are very similar to those rumoured from the next Xiaomi, leading to speculation that this phone is an early engineering model.

A helpful specification shows the phone as having a 1.5Ghz processor, Mali T628 GPU, 720p display, 13 mega-pixel main camera, Android 4.4.4 and TD-LTE, and FDD-LTE support. The design is also similar to the current Redmi, the same range this low-cost phone will likely ship under! 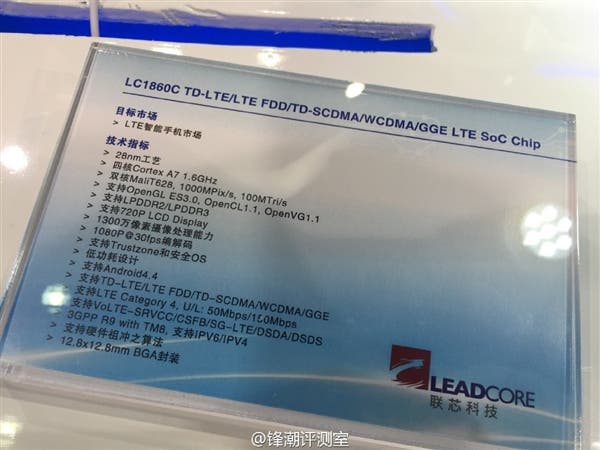 For 500 Yuan or less the Leadcore powered Xiaomi looks great, but we wonder what updates the current Redmi range will receive to keep them competitive? With Xiaomi and Mediatek parting ways, could the next lot of 799 Yuan Redmi’s be running a Snapdragon 615 or similar?

Next Micromax and Cyanogen launch the Snapdragon powered Yureka