When we recently reviewed the Kingzone N3 Plus we have been shocked about the fact that Kingzone didn’t seem to learn anything from the miserably performing and selling Kingzone N3. It still had a lot of annoying bugs, and even worse, Kingzone again claimed a false battery capacity: Instead of the promised 2,800mAh you only get 1,800mAh.

Now the only hope left is the Kingzone Z1, which is supposed to be their current flagship device and successor of the well-performing and very successful Kingzone K1. This handset comes with Mediatek’s MT6752 64-bit powerhouse and appears to be one of the most attractive handsets based on this SoC available these days, judging both by its design and the specs, as it comes with NFC, a fingerprint sensor and allegedly even a large 3,500mAh battery. Did they deliver this time or fail once again? Let’s check that out!

The Kingzone Z1 comes packed in the box that is typical for all Kingzone devices. The only difference this time is that a picture of the device is missing and they didn’t print the specs on the rear yet started using stickers glued on there – probably to save money. The accessories packed with the handset are still the same you get with all other Kingzone devices: Documentation, screen protector, bumper, OTG adapter, micro USB cable, headphones and a 1A wall charger. 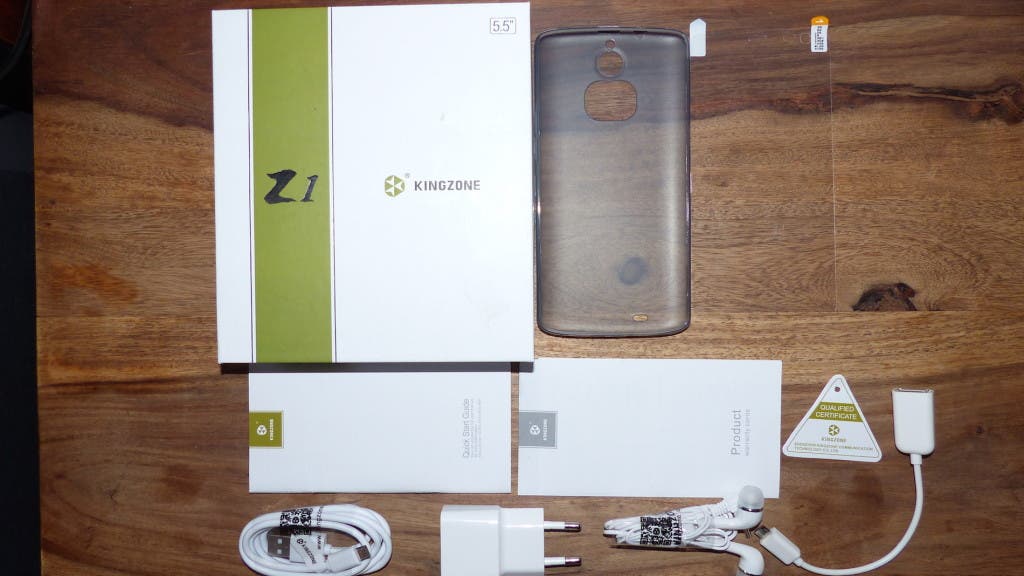 Design-wise on the pro-side we can certify that Kingzone really have some talented designers, as the Kingzone Z1 does look quite stunning and can easily be called one of the most beautiful Chinese handsets available these days. It’s available in White / Gold and Blue / Gold color. The latter one is the color-combo we got, but it really isn’t blue, it’s black in reality. Unfortunately “amazing” stops right after the looks, since Kingzone try their best to fool the customer. Advertising a full metal body isn’t quite up to the truth, since everything metal on this phone is the thin, golden frame on the left and right sides. The large golden parts on the upper and lower sides of the handsets are actually made from plastic. And it doesn’t stop there! The slim bezels don’t exist either, since Kingzone placed a frame around the LCD panel that has exactly the same color as the screen itself. While the Kingzone Z1 is turned off, it might look like it is almost bezel-less, but as soon as you fire it up you will see massive 4mm bezels. Nope, that’s still not the end of the story: Not even the stereo speakers you see on the lower frame are real. Those are just fake holes with nothing inside. The real media speaker is placed on the rear. There isn’t even a connection between the holes and the media-speaker, which means that the audio sounds very muffled when placing the handset on a table. Another flaw we noticed is that the labels of the physical buttons are printed on the frame upside down.

Build quality appears to be solid for the most, but that doesn’t change anything about the fact that the Kingzone Z1 is a bag of misleads. Something that might not have been the best idea by Kingzone is the back-cover. It is really thin, resulting in it bending massively when removing it. Now the NFC antenna is glued on the back-cover and we don’t believe that those antennas like being bent that much. NFC of our review sample didn’t work from day one, go figure.

Now screen is surprisingly the part where Kingzone did good. For a 5.5-inch 720p panel the screen features an outstanding picture quality which doesn’t look like 720p at all. You really need to come very close to the screen to start noticing the low resolution. It seems like the claims that this screen is made by JDI are true. The only flaw we noticed is an insufficient backlight when using the screen outside in the sun. You need to look out for some shadow to properly see what’s going on. The digitizer is working quite well, also. It could be a little more slippery and the input lag could be a tad less, but else it’s working just fine.

The Kingzone Z1 is powered by the Mediatek MT6752 SoC and 2GB of RAM. This 64-bit Soc boasts eight ARM Cortex A53 cores clocked at 1.7GHz and a Mali T760 GPU, which makes that SoC quite a power-house, outperforming the Snapdragon 615. Well, at least that is what we are used to from other MT6752-based handsets, but the Kingzone Z1 somehow struggles to reach optimum performance. This appears to be some kind of software issue and got improved with the first OTA update, but there still are some issues left which makes browsing the web and playing games not an experience as smooth as we are used to or would expect, especially at only 720p resolution. We are positive that this will be fixed soon though, as Kingzone delivers regular OTA updates for the Z1.

The Kingzone Z1 runs the same Android 4.4.4 KitKat ROM as the recently tested Kingzone N3 Plus. That means that you again get a vanilla Android installation with the typical Kingzone launcher on-top but no bloatware at all. Like with the N3 Plus, the only special features present are off-screen gestures, a fingerprint-scanner control center and settings for the handsets status LED. Unfortunately the Kingzone Z1 also shares the N3 Plus’ issues and even adds a few more. Unified storage is missing, leaving only 3GB of memory left for installing apps and there are incompatibility issues which makes some apps not appear on the Google PlayStore. This includes Real Racing 3 and some benchmark applications for example. A workaround for that is to use alternative app stores like Amazon or Aptoide.

We have been very disappointed with the audio performance of the Kingzone Z1, not only due to the fac t that the promissed stereo speakers are missing, but also because the internal speaker of this handsets sounds terrible. It is way too small which makes proper playback of bass impossible. Also the speaker tends to distort very quickly and sounds muffled by mixing up trebles and heights while suppressing bases. The headphone jack hasn’t been able to impress either since the output isn’t quite balanced as well plus lacks a decent volume level.

The Kingzone Z1 uses a strange combination of LDS and foil antennas to delivery all those signals to you. While we would’ve wished to see LDS antennas for all kind of wireless technologies, Kingzone do only use one LDS antenna for 2G and 3G signals. FDD-LTE is done through a standard foil-based antenna, as are GPS and Wi-Fi / BT. This means that you have a very good performance for both GSM and WCDMA networks, but both LTE and Wi-Fi don’t hit the high-end level at all, which for a current flagship is very disappointing. It’s not like LTE or Wi-Fi would be very bad, but you definitely notice the missing LDS antennas.
The biggest disappointment was GPS performance of the Kingzone Z1. Kingzone use the very same antenna as for the N3 Plus in the Z1, which means the GPS performance sucks exactly the same way as it was the case with the N3 Plus. First fix took us ages once again, and all next fixes also took up to a minute with very bad signal strength for single satellites and an accuracy never below 3 meters.

Allegedly, like a bunch of other MT6752 flagships, the Kingzone Z1 is supposed to boast a Sony IMX214 camera with 13 mega pixels on the rear. In reality this is not the case and the Z1 features the very same camera sensor as the N3 Plus. This obviously means that pictures taken with this handset are far from looking beautiful. The Kingzone Z1 has the same issues with a lack of sharpness, direct sunlight and noisy images like the N3 Plus. The same applies to video recordings. The LED flash also is far from being usable, as it simply is too dark.

On the spec-sheet, the Kingzone Z1 seems to be the MT6752 handset that features the largest battery among all available phones and phablets with this SoC. 3,500mAh sound quite promising and would indeed be amazing, enabling a battery life of 2 days and more. Sadly, the 3,500mAh are nothing but smoke and mirrors. When we measured the real capacity of the cell, the result was 2,700mAh, which is lower than the 3,000 – 3,100mAh of a similar priced Jiayu S3. Once again Kingzone do tell lies here, trying to gains an advantage over their competitors with fake specs, and again that’s a big no no for us. Screen-on time of the handset reaches about 4 hours, which translates to a day of battery life with mediocre power consumption and a cut down on the gaming-side. 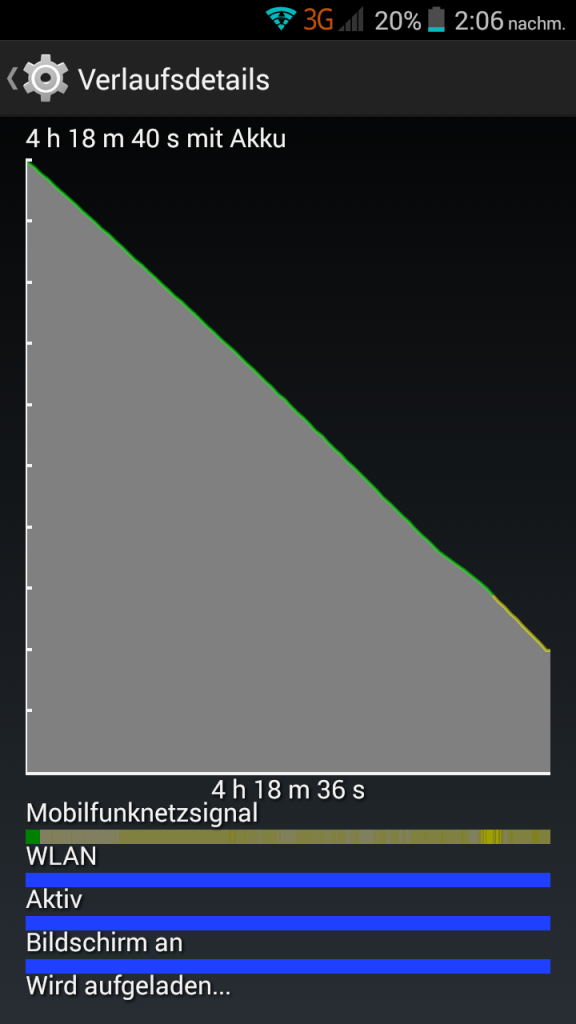 The Kingzone Z1 could be a very good handset if Kingzone would either deliver what they promise or just tell the truth about the handsets specs and lower the price-tag, but in the currrent state really is nothing more than an overpriced bag of empty promises and lies. If you are fine what you get here, we won’t talk you off purchasing the Kingzone Z1, but in case you are after the very best price-performance-ratio we urge you to stay away from the Kingzone Z1. At the same price or even more (depending on the seller and the current coupons available) the Kingzone Z1 does offer significantly less boom for your bug than a Jiayu S3, which quickly unveils the looser of this game.

Previous Hands on and first impressions of the Gionee Elife S7!