The best look yet at the LeTV Android phones due for launch this month plus details of pricing.

LeTV are really teasing us with the constant leaks and teasers for their upcoming smartphone range. At this point it is believed that LeTV have at least 3 models in development with at least 2 of the phones being scheduled for a launch later this month.

Spy photos and teasers of the LeTV phone mean that we all know what to expect in the looks department, but incase we weren’t sure, new press photos show plenty of LeTV device to give us a good look.

The image above shows the LeTV in a meeting with a few different LeTV devices on the table and in hand. We can see that there are was an alternative LeTV logo type considered for the phone at one time too.

Of all the glimpses we see the one of the working model in hand is the best so far. It gives us an idea of the phones size and shows just how narrow the bezels are on either side of the screen. The top bezel is impressively thin too (Nubia Z9 take note!).

Along with this image, a leaked image from an internal meeting was also uncovered. The slide shows pricing for the LeTV S1 at 1499 Yuan with the S1 Pro coming in at 2499 Yuan. The “+490” is the cost for a LeTV streaming subscription. 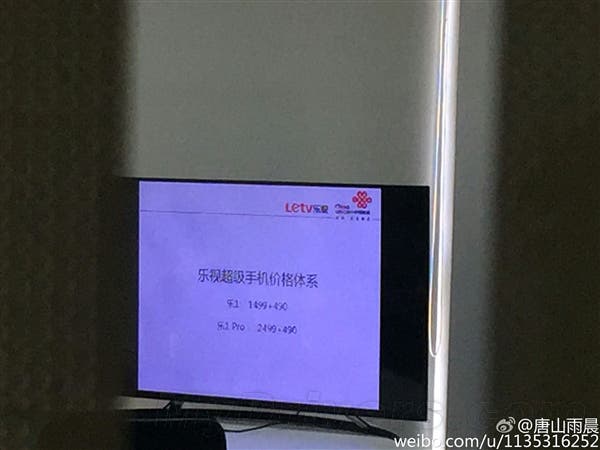 The flagship Pro model is believed to have a Snapdragon 810 chipset, 4GB RAM, 2K display, 20.7 mega-pixel main camera, and 4MP ultra-pixel front camera. The standard S1 will feature a Mediatek processor, less RAM and 1080 display. Type C USB’s are thought to be in use on the LeTV range also.

Plenty of great flagship phones to choose from for us Chinese phone fans, but which one would you choose?