Hisense is a well-known name when it comes to consumer appliances, however, the company has yet to actually leave a prominent mark on the smartphone market, though that doesn’t stop them from trying. Enter the new Hisense Small Octopus D1, a mid-range smartphone with standard specifications but interesting Wi-Fi features.

The Hisense Small Octopus D1 was revealed by Hisense yesterday. While the tech specs of the device are just about average, the phone boasts a dual-antenna design which can reportedly achieve “360 degrees surround Wi-Fi signal reception”. Thanks to the high-end Wi-Fi chip in the D1, the Broadcom BCM-4354 with dual-antenna MIMO support, users can get a strong Wi-Fi signal even in places where there’s a lot of interference. 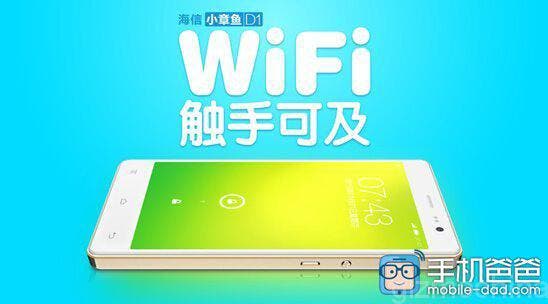 The phone features a Snapdragon 410 64-bit processor with 2GB RAM and 16GB of storage. It comes with a decent 5-inch 720p display. The measurements of 135.8 × 67.8 × 9 mm show that the phone is relatively thick. There’s an 8MP camera at the back with a 2MP front facing shooter. To power all this, you have a 2500mAh battery on board. Finally, the phone supports just one SIM card with GSM, WCDMA, TD-SCDMA, TD-LTE and FDD-LTE network connectivity.

With average specifications like this we were expecting a low price tag, but Hisense seem to feel that 1399 Yuan ($226) is a good number! Even with the fancy WIFI reception it is a little on the steep side especially considering the Xiaomi Redmi 2 is close on specs for less, not to mention affordable flagships such as the JiaYu S3. It seems like Hisense is still long ways from achieving anything in the smartphone market.

Next Xiaomi Mi4i rumoured to cost as little as $161!