According to screenshots taken from the TENAA website in China, the flagship Nubia Z9 is going to be one hell of a powerful beast!

We are now used to seeing Android phones come with huge amounts of RAM and powerful processors. So far Asus have released the Zenfone 2 with 4GB RAM, Lenovo have the K80 with 4GB RAM and even Elephone are working on a 4GB RAM phone. Personally 4GB is more than enough RAM for myself, but if you want more the Nubia Z9 with 8GB RAM should be enough.

We are not so sure how genuine these screenshots are, but if they are accurate then the Nubia Z9 (flagship model) is going to really shock the mobile world when it is released in May. 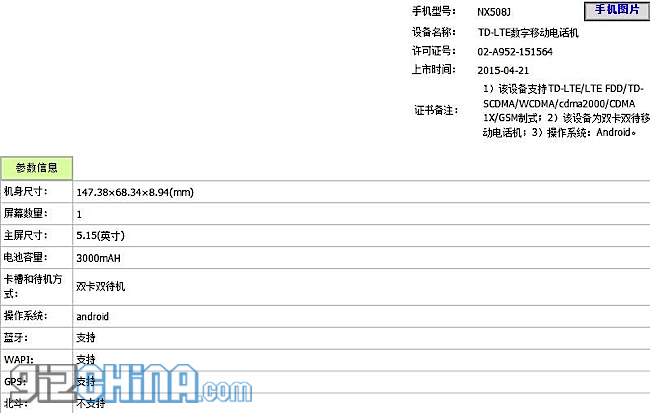 According to the TENAA specifications, the Nubia Z9 will sport a 3.5Ghz processor to go with that 8GB RAM, and run Android 5.0 Lollipop out of the box. Other details from the TENNA listing include overall dimensions of 147.38 x 68.34 x 8.94mm, a 3000mAh battery, 180g weight and 8 mega-pixel front and 16 mega-pixel main camera.

Just what processor the Nubia Z9 is packing we have no idea, but we cannot wait to see if these claimed specifications are in fact true next month when the phone if finally released.

Thanks to our anonymous tipster for the images.

Next Samsung get’s cloned with the Landvo S6