If the idea of a Xiaomi Mi4s, Redmi Note 2, Redmi Note 2 Pro and Xiaomi Mi5 sound good to you then check out this purported leaked Xiaomi roadmap.

We’ve seen leaked roadmaps in the past but we have never seen one from Xiaomi. Xiaomi are generally very secretive about their upcoming models, so with this in mind we ask you to rap a couple of pinches of salt before reading on.

According to the Xiaomi roadmap we can expect at least 4 new Xiaomi phone models this year.

First up will be an updated version of the current Xiaomi Mi4. Due in June 2015 the Xiaomi Mi4S will feature a 5-inch FHD display and 13 mega-pixel main camera just as the current Mi4 does, but with addition of OIS for the main camera. It looks as though the front camera of the Xiaomi Mi4S is a 4MP ultrapixel model and that the processor is a Qualcomm MSM8994 or more commonly known Snapdragon 810. 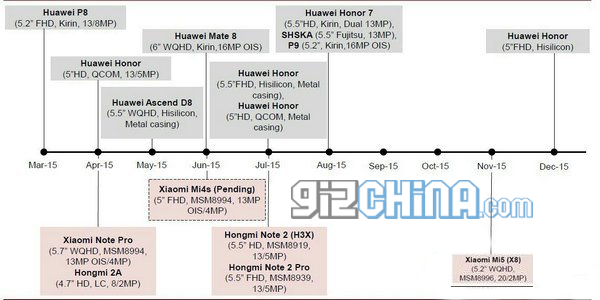 After those launches we will have to wait until November where it is rumoured the Xiaomi Mi5 will launch. Specifications for the Xiaomi Mi5 include a 5.2-inch 2K display, 20 mega-pixel main camera, 2 mega-pixel front and MSM8996 chipset rumoured to be the Snapdragon 820.

Next Vivo X5Pro to be launched on May 13th