Coolpad’s Dazen sub brand has made some very good low-cost phones since it launched, and their next could take the battle right to the main players.

You may recognize that Xiaomi already have the Redmi 2A priced at 599 Yuan and that Meizu’s m2 also costs the same in China, well Coolpad are entering the game with a 599 Yuan model that they feel will kick the other two out of the park.

The model sighted at TENNA today is the Coolpad Dazen 8298-M02 (China Mobile version) and A01 (China Unicom model), obviously just a code name for what will eventually launch as a killer of a budget phone.

The Chinese mobile phone governing body has revealed that the new Dazen phone is made of a plastic and measures 140.8 x 70.4 x 8.9mm and will come in white, silver, gray and gold.

It seems that a Mediatek chipset running at 1.3Ghz will power the phone with 2GB RAM for memory and 8GB storage. An SD card port will be available for up to 32GB cards too. Cameras are a 13 mega-pixel rear and 5 mega-pixel up front, with a 5-inch HD panel providing viewing (the same as the Meizu m2).

The M02 version of the phone will have a 2500mAh battery, while a slight tweaked model for use with China Unicom (named A01) will boast a larger 3000mAh battery. 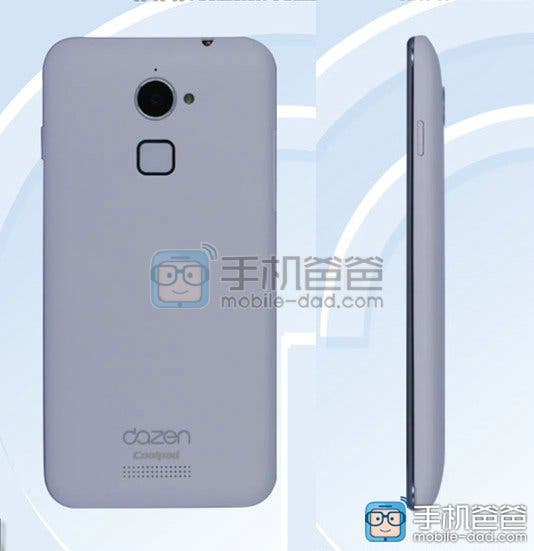 What really stands out on the new Dazen model is the inclusion of a rear facing fingerprint scanner. So far we haven’t seen a phone cost as little as 599 Yuan and come with the new security standard, a feature which is surely a great addition compared to the Meizu m2 and Xiaomi Redmi 2A.

Pricing for the China Mobile version is believed to be 599 Yuan while the China Unicom model (the version that will work outside of China) will be slightly more at 699 Yuan.

Previous Leaked: Are these up close photos of the Huawei Mate 8?