Back in May, a partnership between the Chinese Qihoo 360 and Coolpad gave life to a new brand called QiKU. During the announcement, the Qihoo 360 CEO, Mr. Zhou, said that three devices would be unveiled during this year under the QiKU branding, at the time the lack of details about the handsets made the brand fell into oblivion, well, so far.

This week some new details emerged from the web about the first device from QiKU, the new smartphone is expected to be announced in August 26 during a conference scheduled by the company. However, thanks to leaked info in AnTuTu we can get an early idea of what to expect from the device specifications. 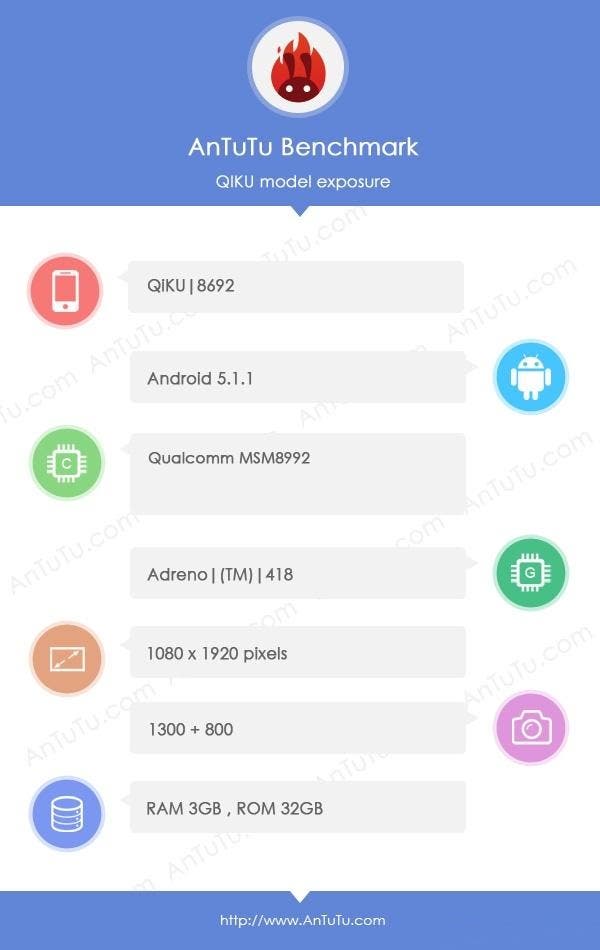 The QiKU 8692, if we can call it that, packs the six-core MSM8992 Snapdragon 808 processor, a smart choice that can be considered safe while a careful move by the company, since this is their first smartphone, the risks of the “hot” Snapdragon 810 couldn’t be the most wisely choice.

The 808 works alongside the Adreno 418 GPU that has proven to work well at high resolutions even in the most intensive graphical tasks, for this reason should work even better in the QiKU 1080p display. There is also 3GB of RAM and 32GB of onboard storage.

In the camera department, we have a 13MP main camera and a 8MP front snapper. The new device also runs the latest Android 5.1.1. In addition with all the specs listed the device got a punctuation of 50937, so you can compare it with other devices in the same segment, when it is worth remembering that the actual performance and daily usage experience goes far beyond of benchmarks scores.

The expected price may disappoint, or even make you cry, and we hope this are just early speculations, but so far the QiKU may be launched with the price of 3999 Yuan. This may be the first Chinese phone to come with the Snapdragon 808, and overall specs seems impressive and matches the today’s flagship segment, but surely this price should ward off consumers, in a market with better and cheaper alternatives. What you think about?