Xiaomi are batting down the hatches and digging in for the long haul. The once exciting brand to watch is now playing it safe by launching more and more variants on a familiar theme. The Xiaomi Mi4C is a great example of this.

Xiaomi already have 2 Mi4 based models in the flagship Xiaomi Mi4 and the plastic bodied Mi4i, and now a 3rd is making headlines, the Xiaomi Mi4C.

The Mi4C looks set to fill a gap between the metal and glass bodied Mi4 and the plastic bodied, Snapdragon 615 Mi4i. That gap isn’t entirely obvious to us as both phones have great hardware and can be had at low pricing, but Xiaomi obviously feel they need a mid ranger in the mix too.

While we don’t have an official photo of the Xiaomi Mi4C the phone is believed to look almost identical to the Mi4 only with some slight differences on the hardware front. If this image is to be trusted the Mi4C will features a Snapdragon 808 chipset running at 1.8Ghz with a battery of around 3000-3080Ah. The purported package also points at LTE support, 13 mega-pixel main camera and a 5 mega-pixel front. 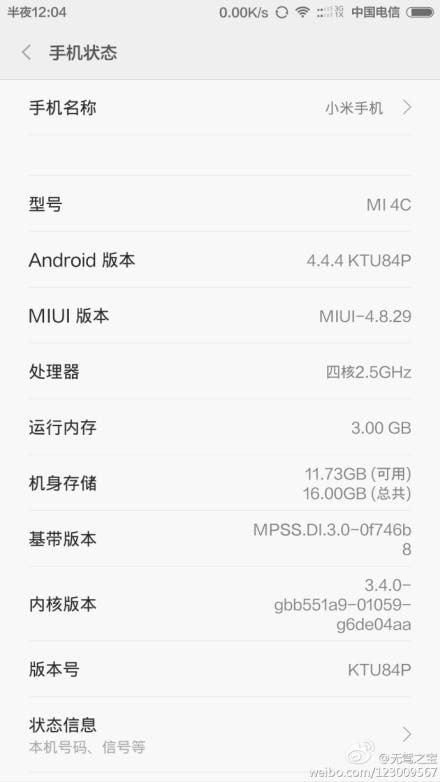 If we look elsewhere on Weibo another tipster has posted a screenshot from the Xiaomi Mi4C which tells of a more powerful 2.5Ghz processor. This leak also tell us the Mi4C might have 16GB memory, 3GB RAM and ship with Android 4.4.4 out of the box. Which leak is accurate, if any still remains anyones guess.

Neither leak tells us of a SD card slot which is a feature the newly launched Xiaomi Redmi Note 2 boasts.