Acer began its presentation at IFA 2015 on a roll, the company already presented great new products, such as the newest Acer Predator tablet series, but beyond that there is another product that aroused our attention the Acer Jade Primo. 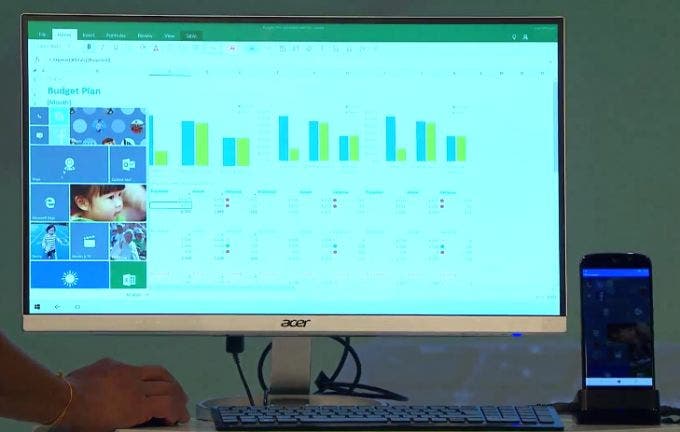 Enabling Continuum is as easy as sliding the phone in a docking station supplied with the device, a keyboard and a wireless mouse come included in the package too. From there you can use a mouse and keyboard to easily navigate just as you would do in a desktop, you can open apps including Outlook, Excel, and Maps. Disconnect the phone and then you can continue to use the same apps from your phone now running the Mobile version of Windows 10.

The Acer Jade Primo features a 5.5-inch Amoled Display, a 21MP rear camera and a 8MP front-facing shooter. The processor is the Hexacore Snapdragon 808. While we still haven’t details about the amount of Ram coming with the device, we could assume 3GB (maybe more) of Ram to easily run both versions of Windows 10.

The details of launch, availability and price aren’t set by Acer for the moment. This level of extended usability reminds me of a promise that emerged a few years ago, but at the time the ideas was to use Ubuntu, that phone didn’t see the light of day. It’s great to see this get of the ground even if it is with Windows, you never know a Linux build might be just an install away.

Next Motorola Moto 360 (2nd gen) is finally alive and kicking!