It’s been gathered that HTC’s codename Hero aka the upcoming One A9 will feature the powerful deca-core MediaTek MT6797. The phone’s listing was found on the Geekbench database.

The MT6797 is said to be 30% more power efficient than other contemporary chipsets. On the One A9, the MT6797 will find itself paired with a hefty 4GB of RAM, which should make the One A9 HTC’s bid for this year’s most powerful flagship. 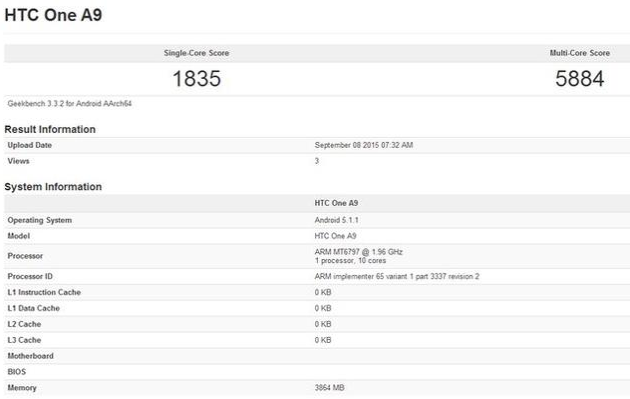 As for the scores that the phone posted on Geekbench, it scored 1835 and 5884 points on single- and multi-core tests respectively. What this means is that the One A9 should be a better multi-core device than the Galaxy S6 (or even the upcoming Exynos 7420 powered Meizu) which scores 5375 points.

Another phone known to feature this chip is an upcoming Zopo. It will be interesting to see the price difference between the HTC and Zopo, I imagine.

Next OnePlus 2 will go invite-free for one hour soon