Huawei’s Honor 7i was unveiled two weeks before the IFA 2015 Conference in Berlin, and, with the exception of the processor (an octa-core, Qualcomm Snapdragon 616) and rotating camera, appears to have the same specs and features as the Huawei Honor 7.

Huawei first brought the Honor 7i to China, but it seems as though the third-largest global manufacturer is now ready for a European release. Germany, it seems, is first on the list of countries outside of China to get some access to the device — with a new name.

As for the battery, you’re looking at a 3,100mAh battery that should hold up for a good day and a half (36 hours), if not more. Android 5.1.1 Lollipop comes pre-loaded, with your choice of Polar White, Isle Blue, and Coastal Gold colors. 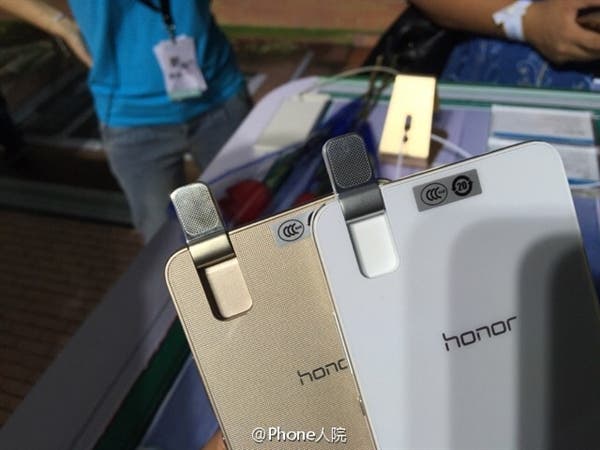 Obviously the big draw to a phone like the Honor 7i (or ShotX) is the rotating camera feature. Rather than having a camera on the front and rear, the 7i has a single rear camera that can be extended and rotated to the front. The moveable camera pod also means that you can get the camera closer to certain shots and allows for a little extra creativity.

As for the name change, we wonder how Vivo are going to feel about it? The Vivo Xshot was one of the first generation camer-centric phones and already Lenovo have released the Vibe Shot and now the Huawei ShotX is being launched. Will Vivo be upset with the similar naming? Will we ever see an Xshot 2 released?

Next Doogee F3 wins Best Mobile Design of 2015 at MIIT