2 days from now Xiaomi will officially reveal the full details of the Xiaomi Redmi 3 with pricing, but we can’t wait and these reported specifications look bang on to us.

There is change a foot at Xiaomi. We’ve seen the company create more expensive phones, slow down the release of their flagship, build full alloy models and there is even a switch in how they launch phones.

In the past Xiaomi kept their device hush hush, but not the Redmi 3. Officially image of the metal rear of the phone have already been pushed to social media, and even details of the 5-inch display and 4100mAh battery have been confirmed. 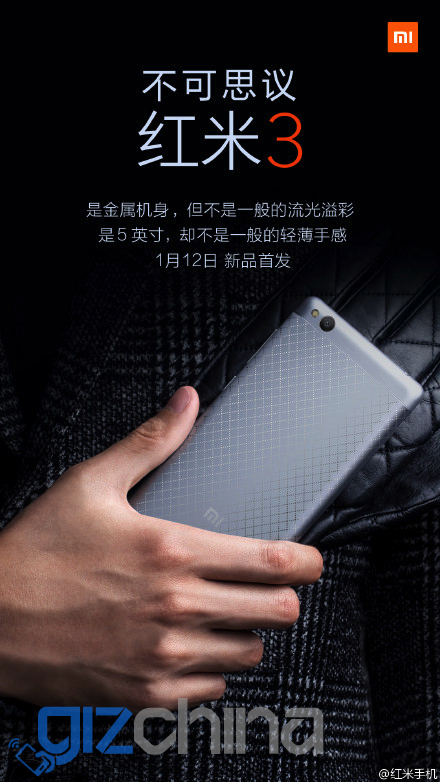 So with the size, battery, and the material the Xiaomi Redmi 3 already pre-announced what more can we learn before the 12th?

Well today camera specifications have been posted, and overall there is a serious update on the Redmi 3 compared to previous Xiaomi Redmi phones. The rear camera on the Redmi 3 will be a 13 mega-pixel camera with F2.2 aperture, 78 degree lens, 120fps slow motion capabilities and even uber quit PDAF (Phase detection auto focus).

Chances are the Xiaomi Redmi 3 is going to cost only 699 Yuan, not a lot of money for a phone with an already big battery and updated cameras, so what else will be squeezed in.

Apparently the Xiaomi Redmi 3 will retain a HD display, and 2GB RA but will run an octacore Snapdragon 616 chipset running at 1.7Ghz. Internal storage is 16GB, while a micro SD card tray will allow cards of up to 128GB.

Other details include Qualcomm’s Quick Charge 2.0, dual SIM LTE, and MIUI 7 based on Android 5.1.1.

On in all an incredible hardware package at a great price, its just a shame the design looks a little ‘meh’ so far.

Next Xiaomi Mi5 spotted in the wild with home button