Everyone might be Helio P10 this and X20 that, but it’s the bread and butter chipsets that make up most of Mediateks more sales and they have just added 3 new processors to their range.

Mediatek already have chipsets to suit every taste, and with 3 more SoC’s to choose from Chinese phone makers are really going to be spoilt for choice. Here are the full details of Mediatek’s latest.

With Chinese phones costing as little as $70 these days Medaitek really needed to up their game and produce a decent processor that not only gives good value for money but also LTE support.

The MT6739 is a quad-core A53 chipset that can rum at 1.5Ghz. The SoC has a Arm Mali T860 MP1 GPU running at 700Mhz and is destined for budget smartphones. Mediatek have capped screen resolution to HD (1280 x 720) on this model, while allowing up to 13 mega-pixel camera to be supported and up to 4GB RAM.

Compared to current budget processor from Mediatek, the biggest update here is the LTE support, in that it actually has some.

Camera support is boosted to 16 mega-pixel cameras and again with we have Cat 6 LTE support.

This is the turbo charged version of the MT6750 with the same architecture as the former but an updated GPU. The MT6750T can support FHD 1920 x 1080 displays, 16 mega-pixel cameras and LTE too. 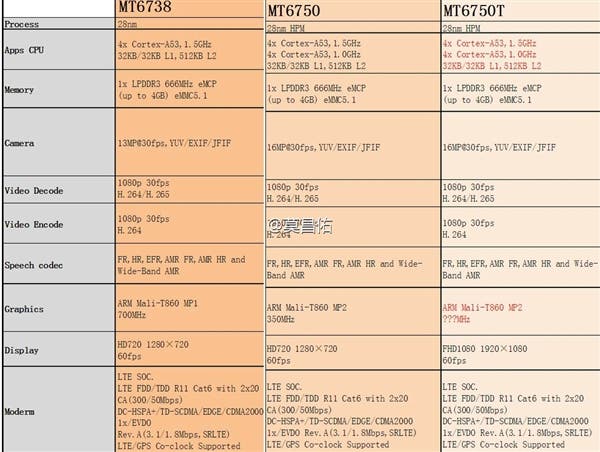 Mediatek won’t put these new chipsets in to production until after the Chinese New Year so expect the first super affordable LTE phones to go on sale sometime in summer 2016 with pricing from $50 up!

Next Video: Elephone P9000 vs iPhone 6S Plus vs OnePlus 2