As a new Oppo R9 teaser confirms a super narrow bezel design, Oppo shops in China have gone ahead and confirmed local pricing for the new smartphone.

We all know that Oppo tends to price its phone higher than competitor so it’s not at all surprising to see the that the new R9 phone is going to cost at least 1000 Yuan ($153) more than a Snapdragon 820 powered Xiaomi Mi5.

Stores around China have already started to advertise the Oppo R9 at a retail price of 2999 Yuan while the larger screened Oppo R9 Plus will cost 3499 Yuan! To put those prices in to perspective the top of the range Xiaomi Mi5 with 4GB RAM, 128GB memory and Snapdragon 820 is only 2499 Yuan in China, and the recently announced Vivo Xplay 5 with curved Samsung display and Snapdragon 820 costs around 3600 Yuan.

Neither of the Oppo R9 phones are expected to rock a flagship qualcomm processor, with each phone appearing to be nothing more than premium midranges with high-pricing. 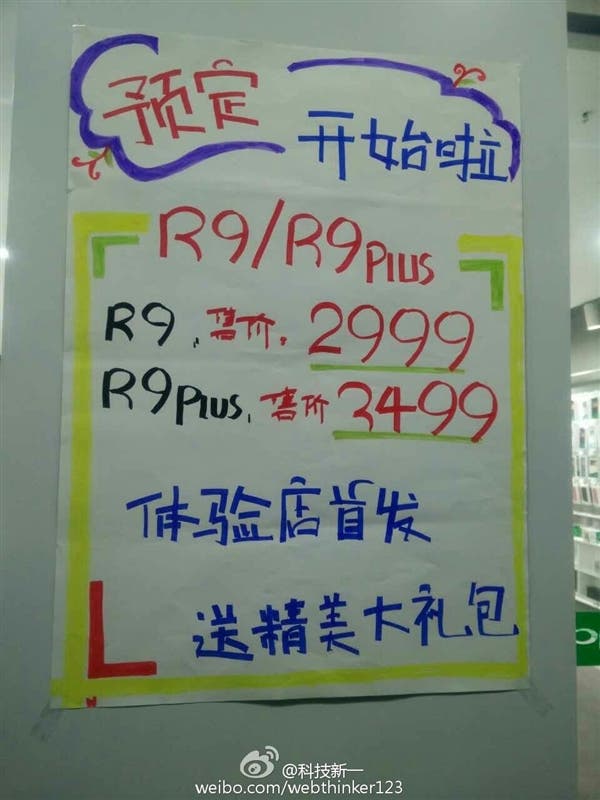 What the Oppo R9 phones will have though are a new physical home button design and a narrow screen bezel that lacks black borders. Oppo will officially announced both versions of the R9 later in the month, but you can already see most of the specifications here in leaked TENAA documents.

Next Official: No Xiaomi haven't announced they are entering Poland