With a 6.4-inch display, the Xiaomi Max sounds big already, but Huawei have gone bigger (Maxer?) with a 6.-inch P9 Max!

Huawei released the P9 with dual Leica cameras, followed by the single camera P9 Lite this month, but a larger P9 Max is lurking in the shadows waiting to block out the sun with a huge 6.9-inch screen.

Huawei are not strangers to large screen devices, but a 6.9-inch display on a flagship model is even big for them. The leaked screen size details were uncovered by a GFXbench benchmark which also pointed out a 1920 x 1080 resolution, Kirin 950 SoC running at 2.0Ghz, ARM Mali-T880 GPU, 3GB RAM and 32GB memory (25GB available to the user). 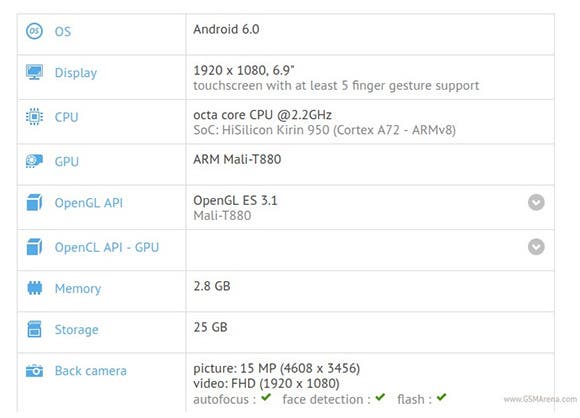 Specs mentions a 15 mega-pixel rear camera on the P9 Max, but we take this to meaning just a single 16 mega-pixel sensor. We also expect a rear fingerprint scanner like the current P9 too.

Huawei are likely to release the P9 Max in the coming weeks but we’re not sure if it will see a China only launch or will be rolled out globally.

Previous Xiaomi Max could be Xiaomi’s largest phone to date!