Elephone have proven that their entry into the action camera market wasn’t a one-off with the release of the 2nd generation Elephone Explorer Pro. Keep reading this review to see what this new action camera is all about.

Last year Elephone diversified their range of products to include an action camera. The first camera by the phone maker was the Elephone Explorer which boasted (limited) 4K video recording and a rear screen plus a host of accessories in the box. In essence though the original Explorer was just the same as every other Chinese sports camera, and in a market full of cookie cutter camera’s something new was needed. 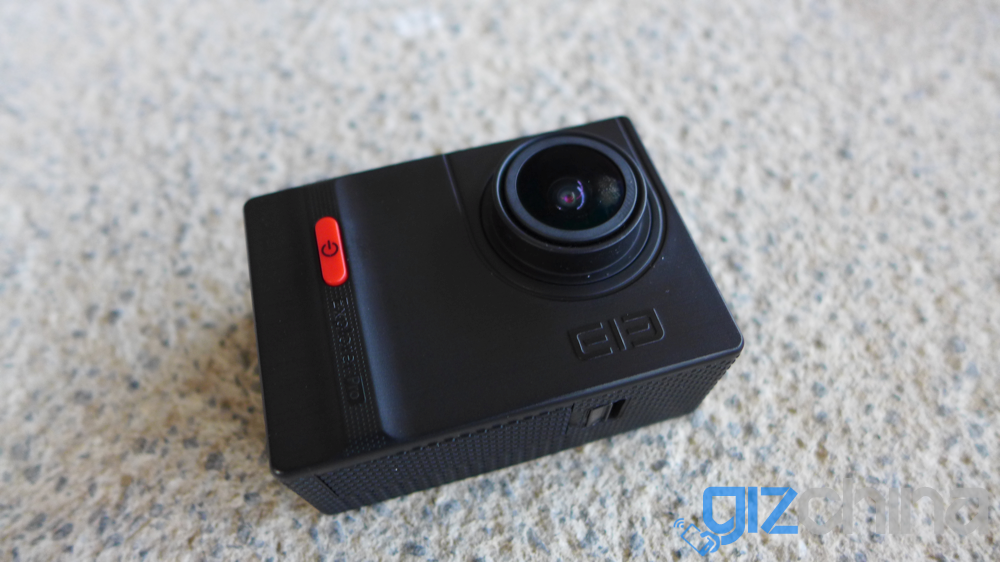 So once again this camera looks very similar to a GoPro or one of the many SJCAM cameras on the market, but to help it stand out, Elephone have added a few of their own design touches to the faceplate of the camera. 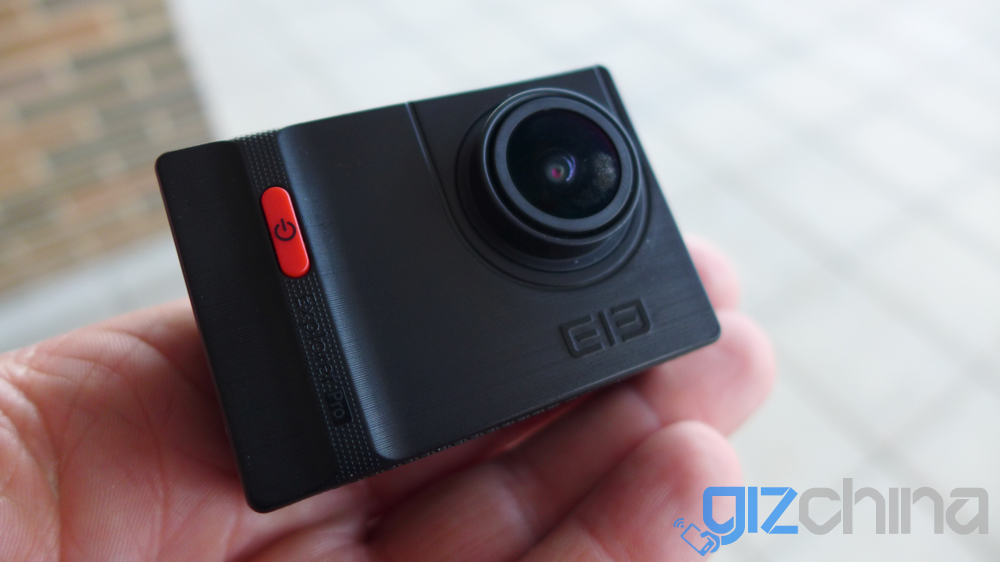 We now have an embossed ELE logo on the front, along with a new, thin red power button and Explorer Pro branding. In press images of the camera the face does appear to be made of a brushed metal, but this isn’t the case and the whole body is plastic. 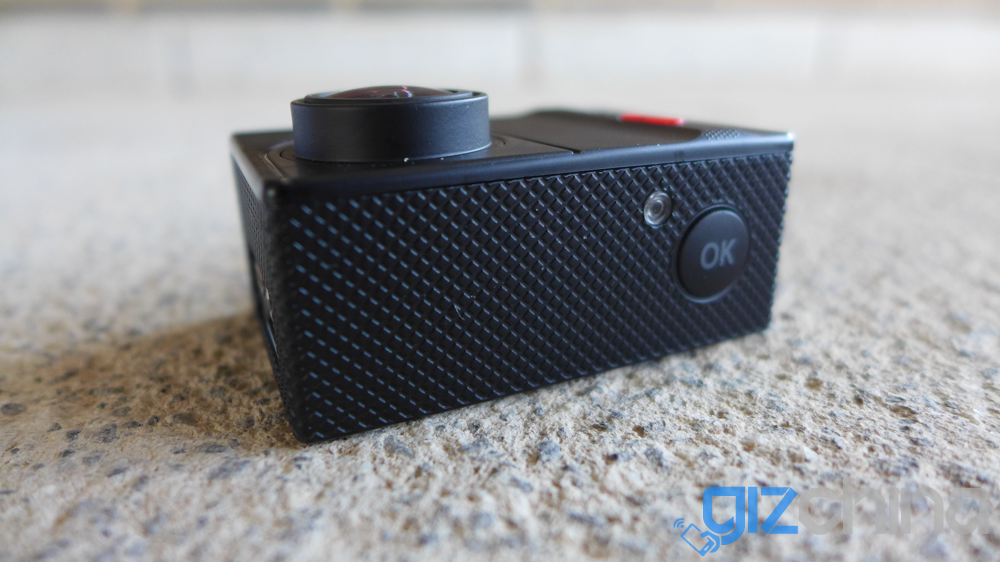 The top and sides of the Explorer Pro has a lattice finish to it, there is an ‘OK’ button on the top with LED notification light. On the right are two buttons for navigating through menus (the top button is also used as a WIFI short cut) there is also a mic on the right too. 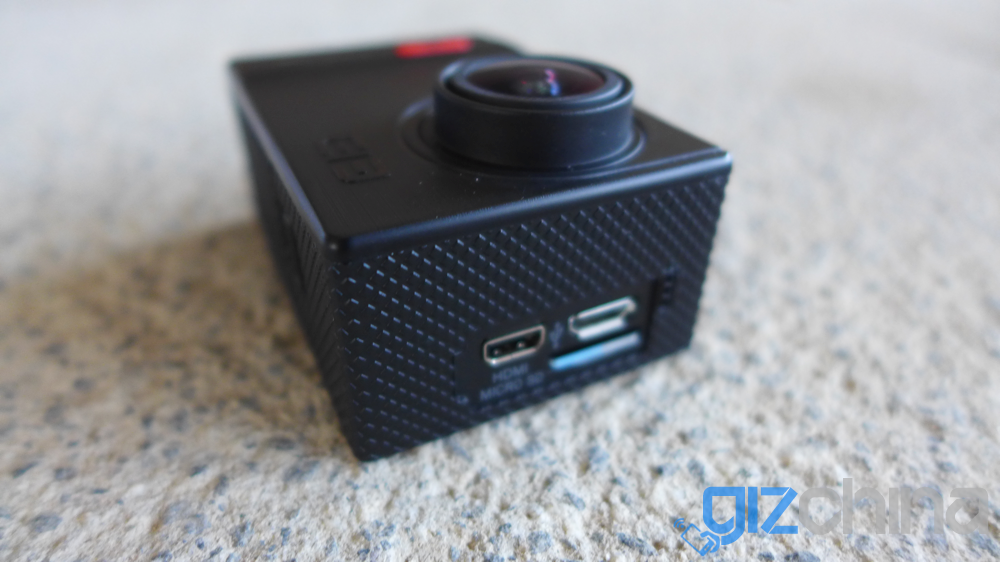 On the left side we have room for a micro SD card, USB and a mini HDMI out plug . 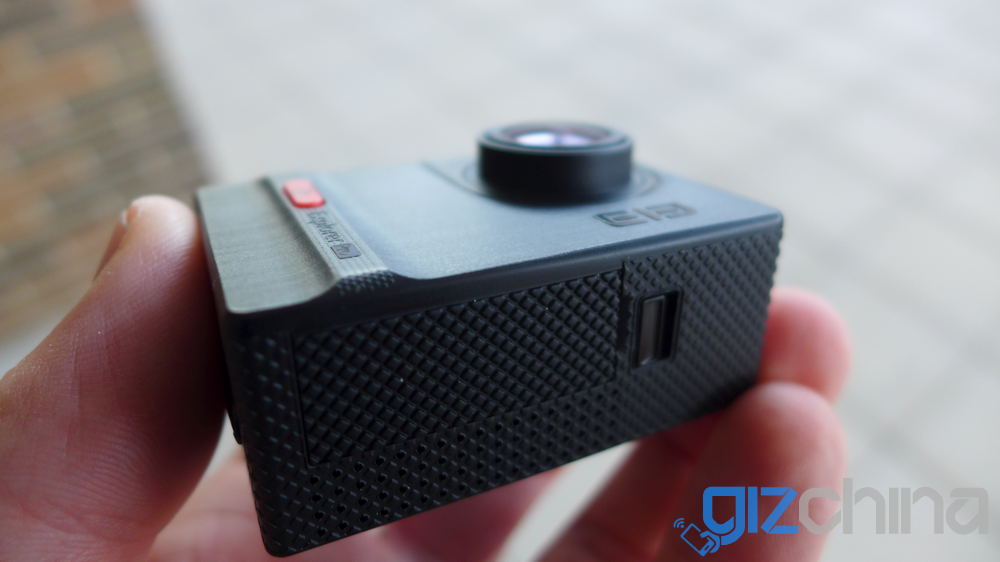 In the base is a speaker and also a cover which keeps the 1050mAh battery safely out of the way. 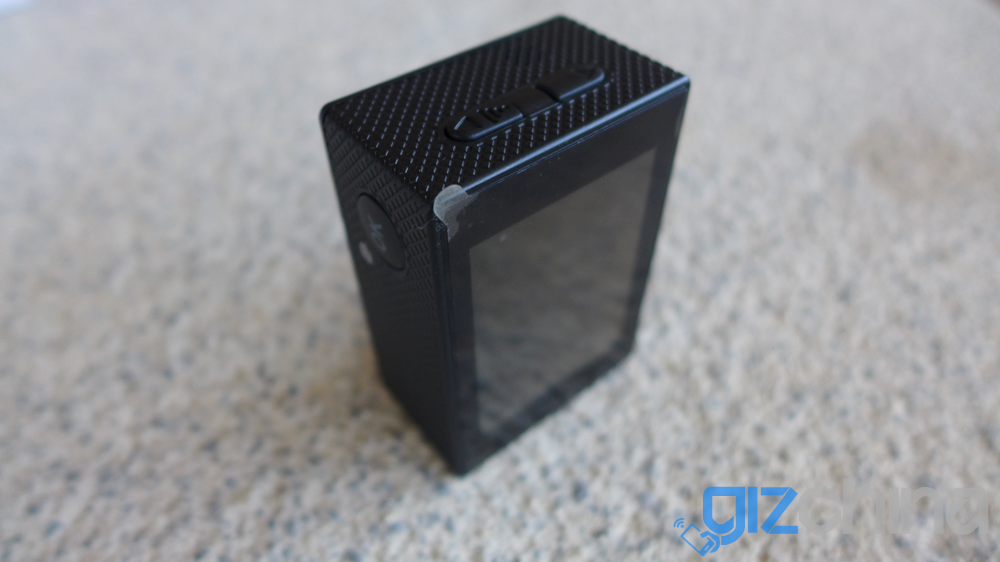 Finally on the back we have a couple more LED lights and a screen. The screen is a 2-inch 240 x 240 panel and can be used to playback video, for setting up the camera or cycling through the menus and settings.

Like the original GoPro cameras and the current crop of SJCAM camera’s the body of the Elephone Explorer Pro isn’t waterproof and you will need to use the protective waterproof housing to keep it safe from the elements. The case comes in the box with the camera along with various mounting accessories and pieces of hardware. 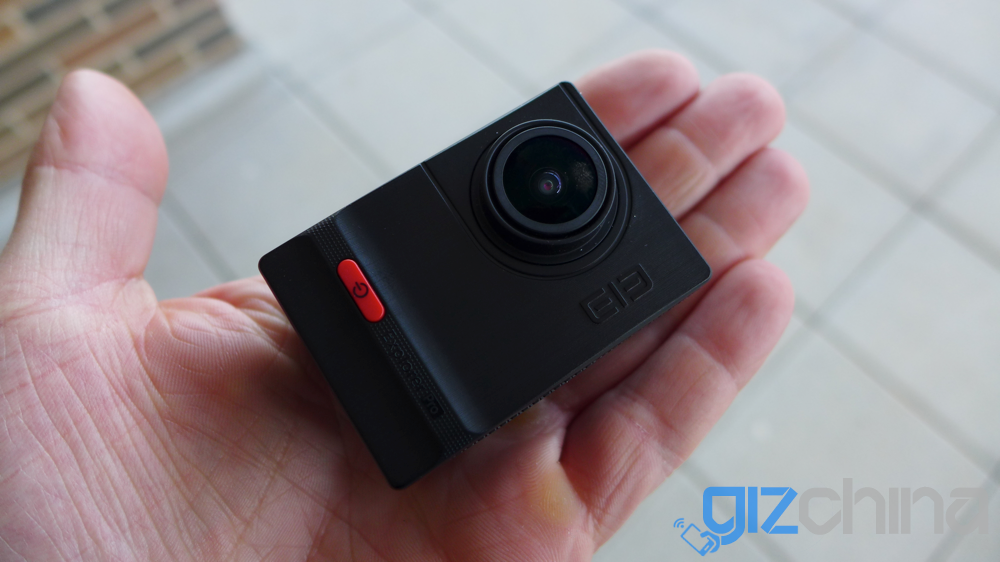 As for build quality, well if you have handled an SJCAM then you will have an idea what the Explorer Pro feels like. It’s hardly a sturdy device, and the buttons feels a little loose, but as it is going to spend much of its time in the protective shell I would guess that it will still prove to long-lasting.

The case itself is thick and sturdy, however the metal pin used as the hinge for the rear panel has already shown some signs of bending. If this continues it would compromise the seal on the case and prevent the seal from keeping out water. If you do intend to dive with the Explorer Pro (at depths of up to 30m) then I suggest you take great care over the hinge and ensure it’s sealing before use. 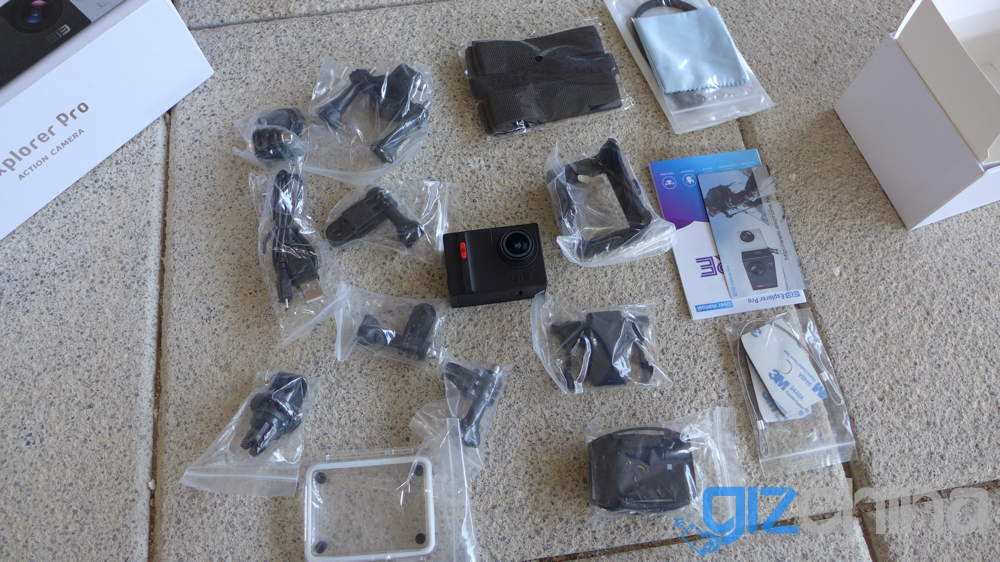 Accessories that come in the box are very similar to those available for GoPro and SJCAM cameras, and I have been able to mix and match genuine GoPro parts with those with the Elephone. The fit isn’t as good as the GoPro parts with some joins feeling tight and others lose, but once tightened it all holds in place nicely.

Ok so we mentioned that something different was needed to have the Elephone Explorer Pro standout from the rest of the field and Elephone have done this by having the camera speak to you rather than just beeping. 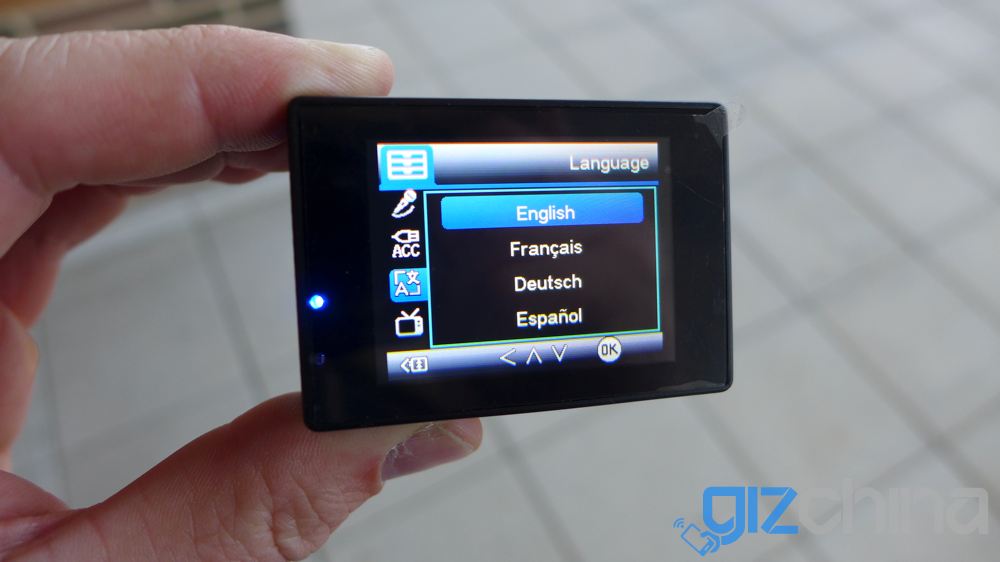 Generally an action camera will beep when you turn it on and beep a slightly different pattern when you start recording, run out of memory or stop recording. With the GoPro I have never had an issue as the beep is nice and loud and I always know what the camera is doing, but this isn’t always the case with Chinese cameras.

Out of the box I was a little wary of the speaking feature especially when you hear just how quiet and tinny the internal speaker is. Once I had the camera mounted to your helmet, the tiny voice travels through the mounting hardware and is amplified by the helmet. In my case I was using a full face mountain bike helmet, I’m not sure you would get the same benefit from a standard helmet and obviously it is going to depend where you plan to mount the camera and what conditions you plan to use it in if the voice is going to be audible or not.

The voice of the Explorer Pro comes in English, French, German, Spanish, Portuguese, Russian, Polish, Japanese, and Chinese and it will tell you things like “Video Start”, “Video Stop” and “Lack of storage”, but it won’t tell you that there is no SD card if you forget to insert one (which happened to me on my first run). 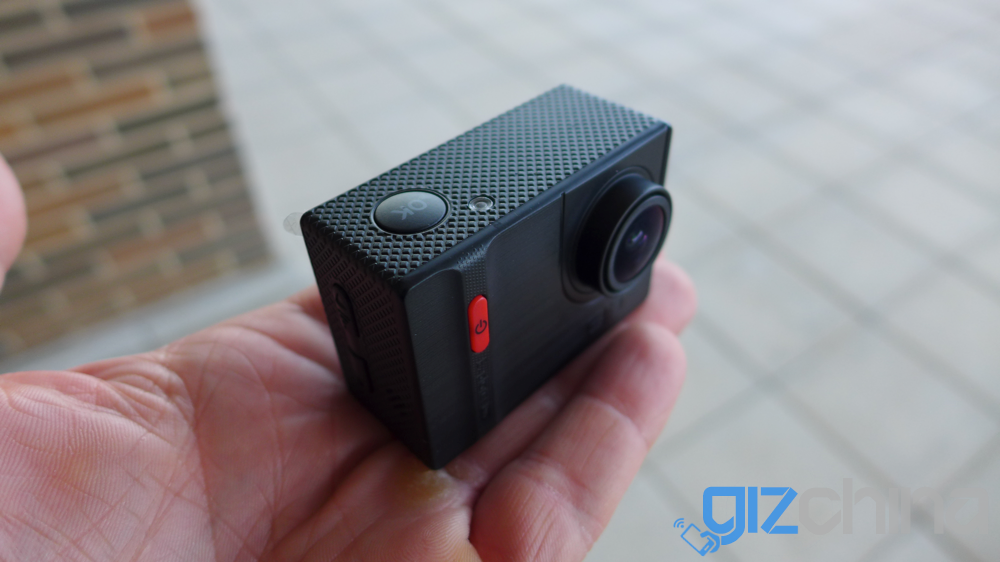 Other than being able to speak the Elephone Explorer Pro can shoot video via the Sony IMX117 camera at 4K @ 24FPS, FHD @ 60FPS etc, can shoot stills at up to 20 mega-pixels, has image stabilisation, and settings for night shots, burst mode, and motion sensing (so the camera will start to record as soon as you move). 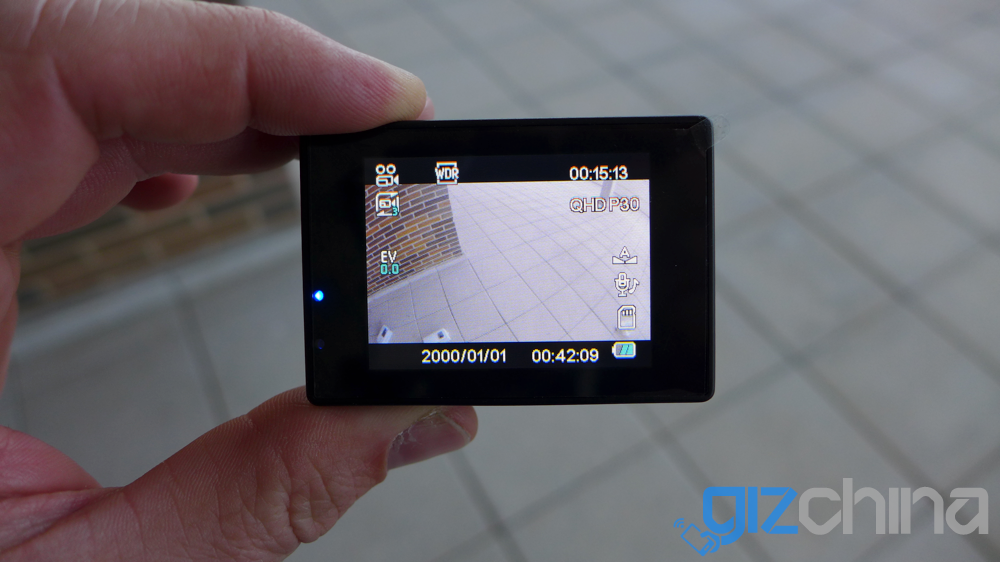 Elephone state that the lens on the Pro is a 170 degree wide angle lens, so I set the camera up in the exact same position that I usually run my Hero 4 Session. On the GoPro I can get my front bike wheel the trail and a good amount sky in a video even when headed downhill. The Elephone doesn’t quite manage to get all that action and as you can see from the sample video, it would really need to be adjusted upwards for better video, but then you would miss seeing the bike moving around.

I very rarely use my action cameras to take still photos but when I do I generally get better results than those offered with the Elephone Explorer Pro.

It’s nice to see that Elephone have decided to stick with the action camera market and its interesting that they tried something new with their spoken camera status rather than the generic beep.

As for an action camera I would say its fine if you are on a budget, but if you are a more serious user and really want to push the yourself to the limits and have the camera follow you then the you are going to want something more durable, with a wider angle lens and able to produce more detailed footage.