The eagerly awaited launch  of then high-end model of the Huawei value Honor lineup is finally here and starting 7pm chinese time the presenting conference is already under way. So let’s get to it with commented specs and pictures for the Honor V8 launch.

Honor V8 is going to feature 5.7-inch IPS display with 2K resolution and thus very high 515 PPI for the highest version of the phone or the standard FHD resolution for the lesser version. Worth mentioning is the fact, thats it’s the first time ever Huawei opted to use the 2K resolution in any of their devices. There will be also a special VR headset released for the V8 with dedicated HiFi sound.

Hardware-wise it’s certainly not going to be a slouch with octa-core Kirin 950, 4 GB fast DDR4 RAM and 32/64 GB of storage choice. MicroSD with up to 128 GB support is also present for easy storage expansion. There are going to be various security features built-in the phone and also the support of Huawei Pay indicating the NFC presence, though only in the higher versions of the phone. Smart PA amplifier should take care of the audio side of things. Phone offers also Bluetooth 4.2 and runs on Android 6.0 Marshmallow with company EMUI 4.1 on top of it.

On the metal body we can find the new 3D fingerprint sensor in the back and the handy Honor smartkey is located on the edge of the device in some updated 2.0 version for better and smarter controls.

Battery capacity will be 3500 mAh with fast charge support 9V2A, USB Type-C connector is also present and the phone will be equipped with a super-saving mode for the desperate moments of low battery and needed uptime.

Cherry on the top is of course the dual camera setup using the same 12 MPix shooters with f/2.2 aperture as in the Huawei P9 model meaning one being RGB and one monochromatic. Tons of features like professional mode, Super Night and especially the hyped 360 degree 3D dynamic panorama. Front selfie camera is going to be 8 MPix one with f/2.4 aperture. And of course comparison with iPhone 6S Plus is something that can’t be missed at any chinese conference launch.

And what about the pricing ? Well the fully equipped 2K model of Honor V8 with 4GB/64 GB RAM is going to cost 2799 yuan ($429) while the FHD versions are going to be priced in China 2299 yuan ($352) and 2499 yuan ($383). The lowest Standard version seems to be lacking the NFC altogether and let’s wait on the exact details of the LTE bands supported, because it’s a big deal for many customers. The Honor V8 should start selling on May 17th and looks like a pretty nice bang for the buck highend model at first glance. 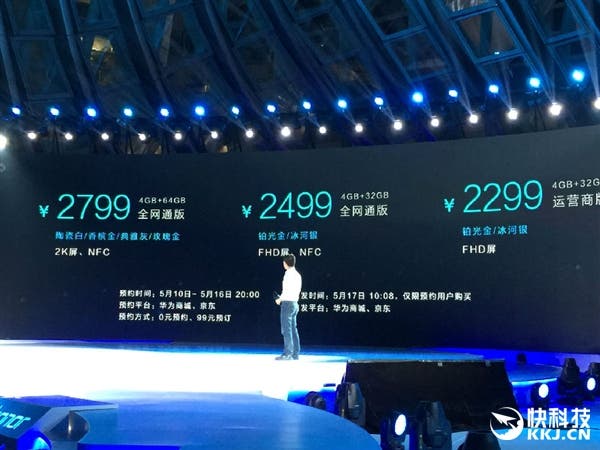 Along the Honor V8 launch there were also some minor accessories introduced like the new headset for 129 yuan ($20), smart fitness bracelet Honor A1 for 99 yuan ($15) or the same bracelet with leather strap for 199 yuan ($30).