The rumours that Meizu might be launching a phone with Samsung’s Exynos 8890 chipset is back again with a tip off from Antutu.

We thought that after the Meizu M3E had launched with a Mediatek chipset the rumours that Meizu would be launching an Exynos based smartphone might have finally died, but this is not the case.

Antutu have now posted a set of details showing a mystery Meizu phone using the benchmarking tool and receiving some impressive scores.

According to Antutu’s Weibo feed the mystery new Meizu scored around 120,000 points (on par with the Samsung S7) and runs the same Samsung Exynos 8890 chipset. The Meizu phone, called the Meizu_m96, is also shows with a 2K display, 5 megapixel front camera, 12 mega-pixel rear, 4GB RAM and 32GB memory. 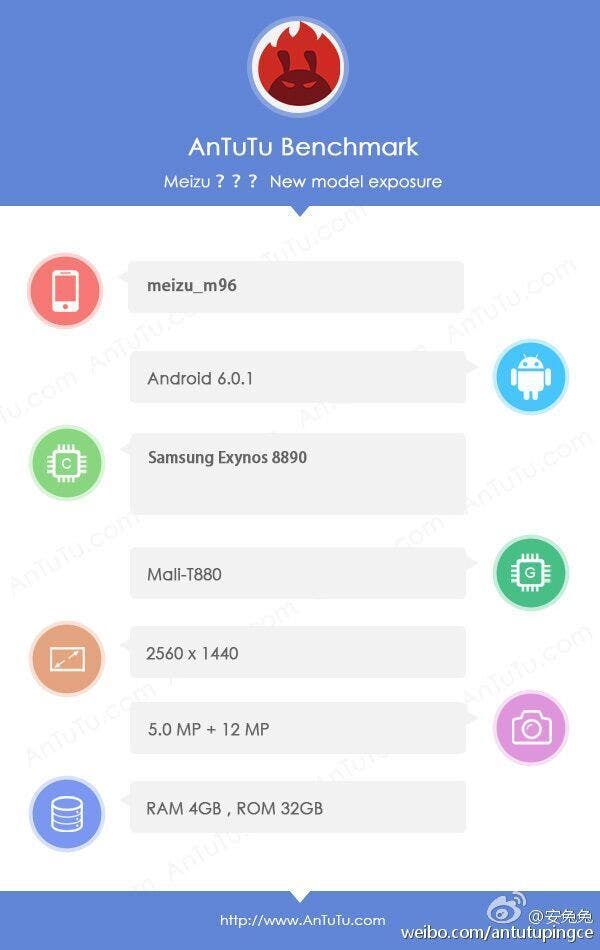 The appearance of a 2K display meets earlier rumours of the next flagship Meizu getting a curved display, but those same rumours also mentioned a dual camera too where as these benchmarks don’t.

While a Meizu with these specs is appealing we are drawn to the change in font that is used for the chipset details in the screenshot. Is it just me or are the fonts different? Could this be just a half assed photoshop.

Next Just in: Xiaomi Mi Note 2 to launch 5th September