OPPO’s R and the F series of smartphones seems to be the focus for the brand of late. Many are waiting for the Find series success (the Find 9), but not to much avail.

Anyway, a successor to the OPPO R9, i.e., the R9S has been believed to be in the works since the last few weeks. According to sources, the phone will launch sometime this year — likely in the next few weeks or so. 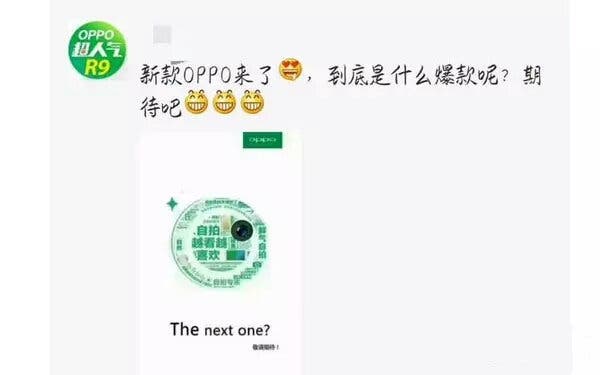 An alleged teaser of the phone has been found online, suggesting that the launch is indeed around the corner. The teaser reads ‘The next one?’ and hints at camera tech, which will (of course) be the highlight of the phone. The OPPO R9, for instance, comes with a rather powerful selfie setup (16 mega-pixel front camera). The R9S is expected to build on that… with software, if not mega-pixel count.

According to reports, the R9S will feature the Super VOOC tech that OPPO unveiled at the MWC earlier this year. Moreover, it’s also likely to feature a Snapdragon 625.

Next Those Meizu Exynos 8890 rumours continue with new benchmarks, or do they?