Two years ago the iNew brand managed to produce one of the most popular phones in the budget sector with the iNew V3 and later on the V3 Plus. Combination of affordable price, okayish hardware and sexy slim design just appealed to many customers and seemed like iNew are on a good path. Then they quite vanished from the main stage for a long time and only recently they managed to try their return to the former glory. As usual focusing mostly on the budget and value sector and today’s iNew U8W review is just about such a phone.

But first we have to of course thank the iNew company for supplying us with the product sample so the review could see the light of the day.

At a first glance at the box it’s quite obvious why the phone is marketed as jolly piece for the younger generation, pastel colors everywhere and the pattern reminding maybe of a balloon. But digging deeper into the box reveals that the manufacturer wanted to make the customer really jolly, because the packaged accessories are quite extensive and that’s never a bad thing. Aside of the phone itself and the obligatory manual (in english even) you are getting a charger with a proper socket plug, USB cable, basic in-ear headphones, screen protector and a plastic cover case. Not too shabby considering the budget aspirations and low price tag.

Our review sample came in the fashionable gold color version, but the iNew U8W is also available in gray, rose gold and even in pretty unusual red. It’s plastic with a thin metal frame, but the finish feels pretty good and the quality of the materials is also on a reasonably high level. With 154,9 x 76,8 x 9mm it’s not the slimmest new kid on the block, but visually it looks thinner. The 169g of weight is in my eyes quite over top considering the mostly plastic build, but well nothing out of the ordinary for a 5,5-inch device. 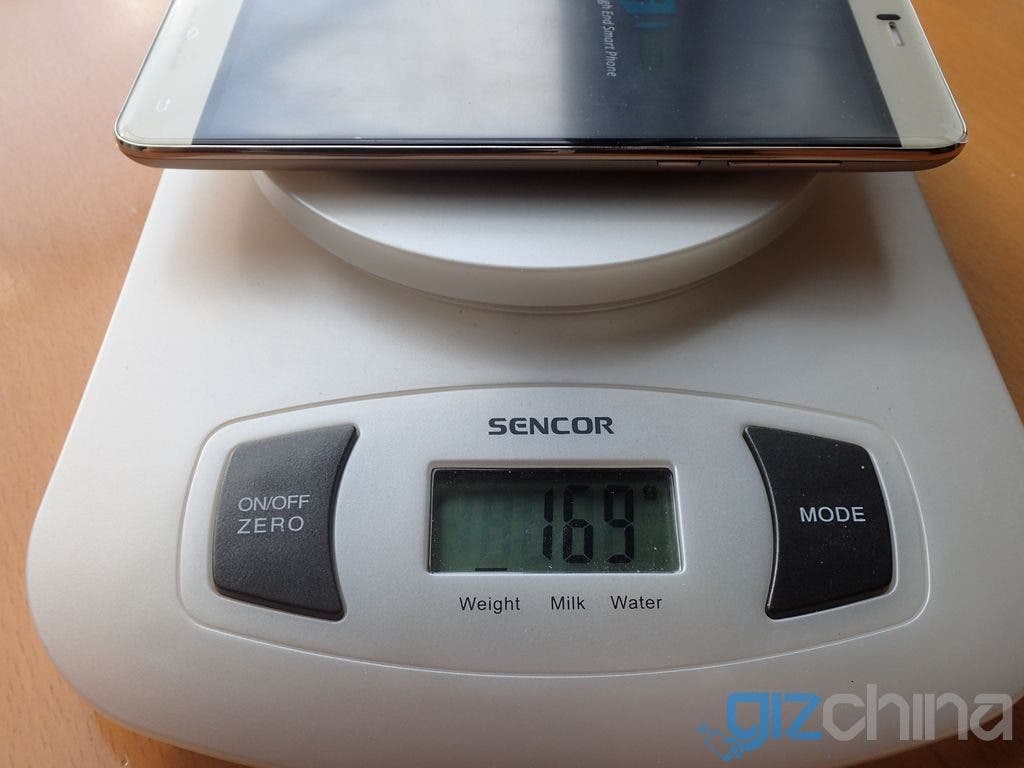 The phone it’s not overly bulky at all and the grip is solid, but once you turn the screen on you realize, that once again the PR pictures can be quite misleading. With the black screen it looks like the bezels are really thin and everything, but of course the ugly black frame “ala LeEco” is pretty much alive and kicking. The front panel features the popular 2.5D arc screen and the usual three functional buttons below, sadly not backlit at all. Above the display the usuad headspeaker, lens of the selfie camera and the unusually large light sensor.

On the right side of the phone you can find the usual power button and the volume cradle, buttons are metallic and with quite alright grip and control, but tend to be a bit wobbly. Nothing is ever perfect. Micro-USB charging connector and the 3.5mm audio jack are located on the top edge and once again i have to voice my displeasure with the charging connector being there and not down, but that could be a personal preference. The chin has no connectors at all and the only notable thing is the microphone. Same for left side, nothing worth mentioning at all.

The back plastic cover doesn’t have any significant texture and feels quite smooth in hand, maybe even too much for my taste. Right bottom corner is reserved for the loudspeaker grille and it means that the sound will be muffled every time you leave the phone lying normally on the table. Up top centrally is the slightly protruding circular camera lens and below it a small LED flash. The company logo just below that is the final touch for the design.

The back cover is removable and i have to add that prying off the lid is a pretty annoying experience almost always resulting in some new micro scratches on it. Once it’s removed though you can find the 2500 mAh green battery, dual SIM slots (standard + micro) and an independent microSD slot.

INew U8W comes with the today’s standard 5,5-inch IPS screen and the budget orientation is due to the HD resolution (1280 x 720 pixels) on it. The display quality is actually pretty good and i was really impressed especially with the color balance and saturation, it’s more than acceptable for such a budget device. Brightness levels could be better on both sides of the spectrum, but nothing extra out of the ordinary. The display supports up to 5-finger multitouch and the reactions are pretty good. That can’t be said about auto-brightness regulation, which is really slow and sluggish. All things considered the phone is packing very good display and it’s one of the highlights of the device. 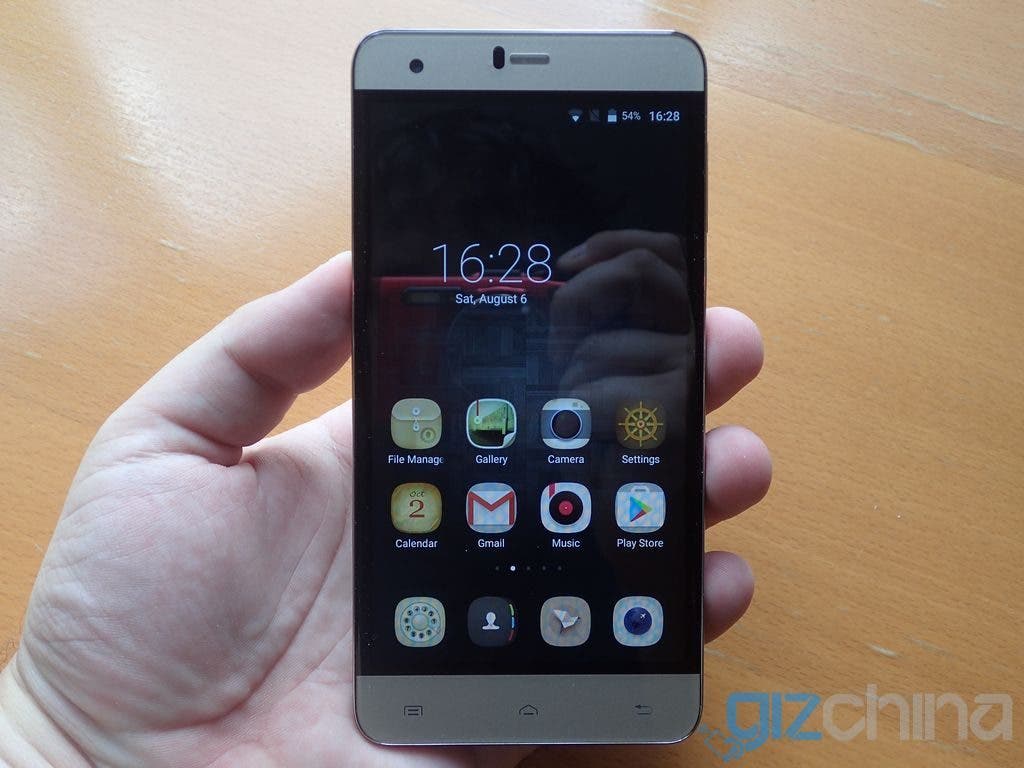 The ultra budget quad-core MT6580 processor clocked at 1,3 GHz is an old friend of ours already so nothing new with it, same with the partnership with the Mali-400 GPU and inadequate 1 GB RAM and weak 8 GB of storage space. The chipset is not a 4G enabled one so you are stuck with the GSM and 3G only. At least the basic features like Wi-Fi b/g/n, Bluetooth 4.0, GPS + A-GPS, OTG and even independent FM radio tuner are included.

The battery has officially a 2500 mAh capacity and sadly i wasn’t able to test the real capacity due to a malfunctioning measuring gadget, because i have my doubts about it. But more on that subject in the battery life chapter. The 8 Mpix and 2 Mpix camera duo comes as total strangers, couldn’t find any info about the manufacturer or a sensor type, the only thing i could extract is the f/2.4 aperture for the rear one.

INew engineers are probably still living in the former glory and not paying too much attention to the Android developments, because the U8W comes with the obsolete Android 5.1 Lollipop pre-installed and even though there is a vague promise of a Marshmallow update soon, it’s still disappointing. At least the system looks well optimized, even though with just 1 GB RAM things are sometimes turning to laggy and sluggish experience. And installation speed of new apps is just abyssmal, go get a coffee if you are trying to install something bigger.

Even though the Android is the older variant there is a pretty good gesture support available for the U8W including all the most used and common options including the double tap to wake and similar. The system is also quite heavily skinned with the iNew launcher theme, some icons can be pretty misleading so i would personally suggest a different one. The amount of bloatware is reasonable and nothing stands out too much.

Nothing to see here folks, just move on. We have seen the MT6580 perfomance benchmarks already way too many times and this one is not one of the best, in some tests it’s a bit slower than its compatriots. The slow eMMC is also not helping too much and the GPU performance is quite bad too. So wrapped up just another day with the cheapest current mobile “modern” innards.

Gaming performance also probably doesn’t need too extensive coverage, you will be able to play more or less anything not so demanding if you are okay with not so optimal fps, lower detail settings and some patience. The real demanding games could turn into slideshow so not a gaming device by any means.

Theoretically the iNew U8W is packing quite reasonable 2500 mAh battery, which should be quite alright for the not so power hungry HD screen and pretty efficient chipset. So is it really ? No and no. The standard PCMark test clocked exactly 4h8m and that’s way below the expected numbers. Real usage can give us roughly about 3 hours of SOT, which once again is nothing amazing. Yes it will probably last a day of moderate usage with ease, but such a budget device should be able to last longer. Personally i’m a bit suspicious about the real battery capacity, because we have seen some troubles with iNew batteries before. 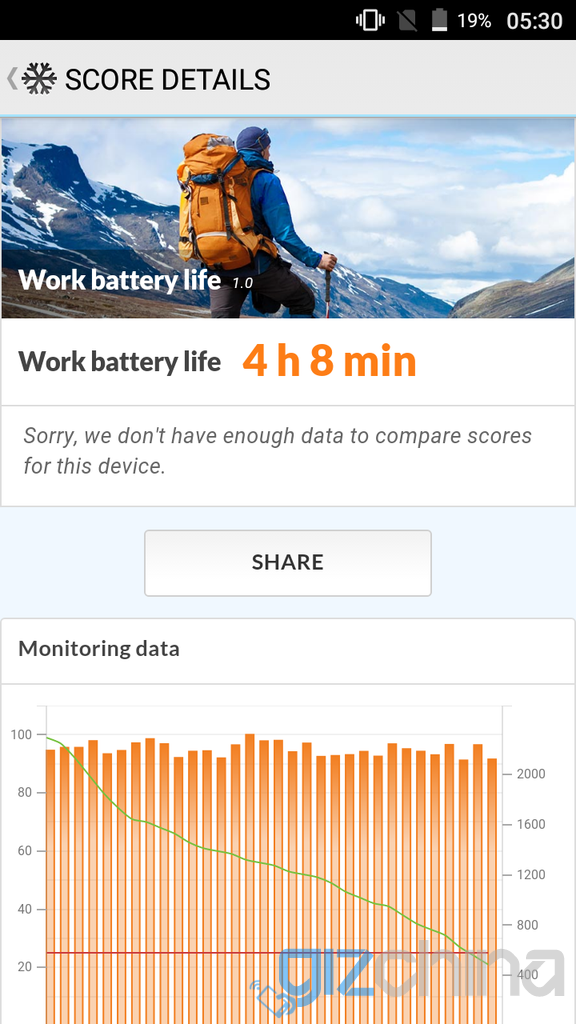 The phone call functions are doing alright in both the sound quality and the signal reception, no unnecessary static or interference. The Wi-Fi signal reception is slightly under the average, but nothing really bad to point it fully out. GPS functions properly, fix is in about 40 seconds and the stability looks decent, just forget about any Glonass support.

For the audio i can once again repeat the budget mantra, dont expect miracles and it can’t disappoint you. The headphone audio output is pure flat and bland, while the loudspeaker has a tendency to be a bit muffled and reverberating. But for the money ? Sure why not.

Usually the cameras in the budget devices are suffering from a wide range of optical and software ilnesses so my scepticism towards the iNew U8W was pretty much automatic. But the unknown 8 Mpix sensor managed to surprise me positivelly and the resulting pictures are way above the level i expected.

Of course it can’t compete with the more expensive ones, has some issues with overexposition, details blending together and it’s not overly fast, but overally the the colors are pretty good, the focus is actually excellent across the board (probably quite reasonable optics used) and the noise and graininess kept in check. Cheers for that iNew. The low light conditions are of course posing quite a problem for the f/2.4 sensor and the extremely weak LED flash is not helping much either with that.

The front selfie 2 Mpix camera is an absolute disaster, blurry unfocused crappy output deserves to be buried in the ground and erased from history. At least the camera software is offering some extra modes including some beautification ones, panorama and a pretty interesting kind-of 180° shots.

The video is limited to HD resolution in 30 fps tops and delivers an all around average performance, which you can check in the sample below.

The return of the iNew to the very budget segment with the U8W model is a bit of a mixed bag of experience. The phone can offer quite nice design with very good display and surprisingly okay camera, but the disappointing battery life, older Android version, lack of 4G and the slugging performance of the weak CPU and low RAM are just dragging it down. The competition in this price range is really fierce so every small detail can matter. Still overally it’s a worthy device and you won’t make a mistake picking one up for some non-demanding usage.

Once again we would like to thank the iNew company for providing the sample for our review and if anybody would be interested in the phone then you can get it for example here in all four color combinations for $69.99.