It’s time for some leaked news again ! Just a while ago an unknown user revealed on Weibo post some information pointing out at Elephone working on some brand new high-end device. According to the post and the picture that comes with it the phone should have a dual curved AMOLED display and 3D glass body. 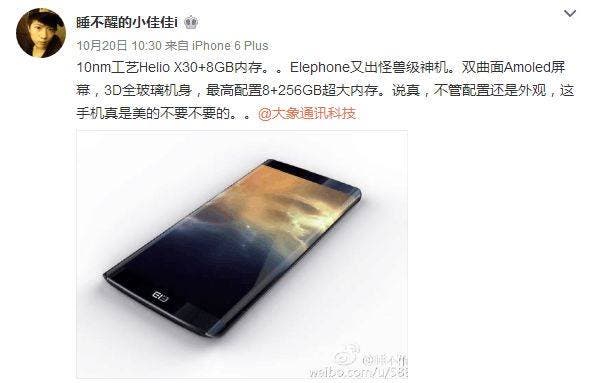 And in the hardware department it will be apparently a monster too, because it should be carrying the Helio X30 processor with 10nm FinFET technology supported by crazy 8 GB RAM and 256 GB of storage. That would make it instantly one of the most powerful phone in the market right away.

But there is of course the lingering question about the real availability of such device, because first Helio X30 powered phones are expected to appear at earliest in Spring 2017 or even later.

Next ZTE schedules launch event for the 27th, what's coming?