Yi has shaken up the camera industry again and again with their action cameras, and now Yi has released their most groundbreaking product yet (on paper at least): a $330 4K mirrorless camera.

You never judge a book by its cover, but if the cover promised similar performance to more expensive books at half the price, it gets people’s attention. That was a horrible analogy, but you get my point, do you?

You can buy the Xiaoyi M1 mirrorless camera here, both the kit lens and dual lens versions. 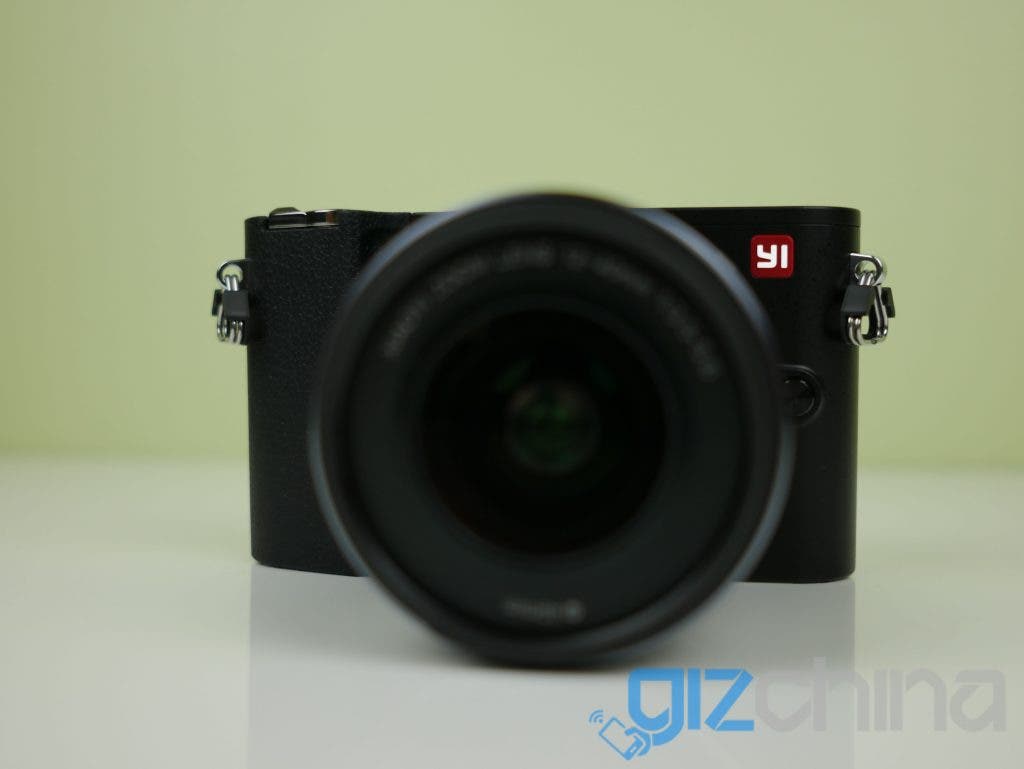 Paper specs aside, let’s get real. First of all, you cannot get the Xiaoyi M1 for $330 outside of China. The lowest I’ve seen it go is about $350, which is still an incredibly low price for a 4K capable mirrorless camera.

The M1 boasts a 20MP Micro 4/3 sensor (the same one used in the Panasonic GX8), 81 point Auto Focus system, and up to 4K/30fps video recording. The specs seem to indicate that this camera is ready to take on DSLRs and mirrorless cameras, but the lack of physical controls indicates otherwise. As mentioned by Yi themselves, this is aimed at those looking to move away from smartphone cameras but not quite ready for DSLRs just yet, a bridge camera to be specific.

Let’s see how it performs.

So before I start this review, I want to get this out of the way, I’m not a photography expert, I don’t have a degree in art, I don’t have a photography portfolio, I don’t shoot weddings on the side, so I’m an average Joe, most probably like you… well, almost. I do know my way around mirrorless/DSLR cameras because I shoot video on a regular basis, so hopefully I can give you some insight into this camera if you are interested. 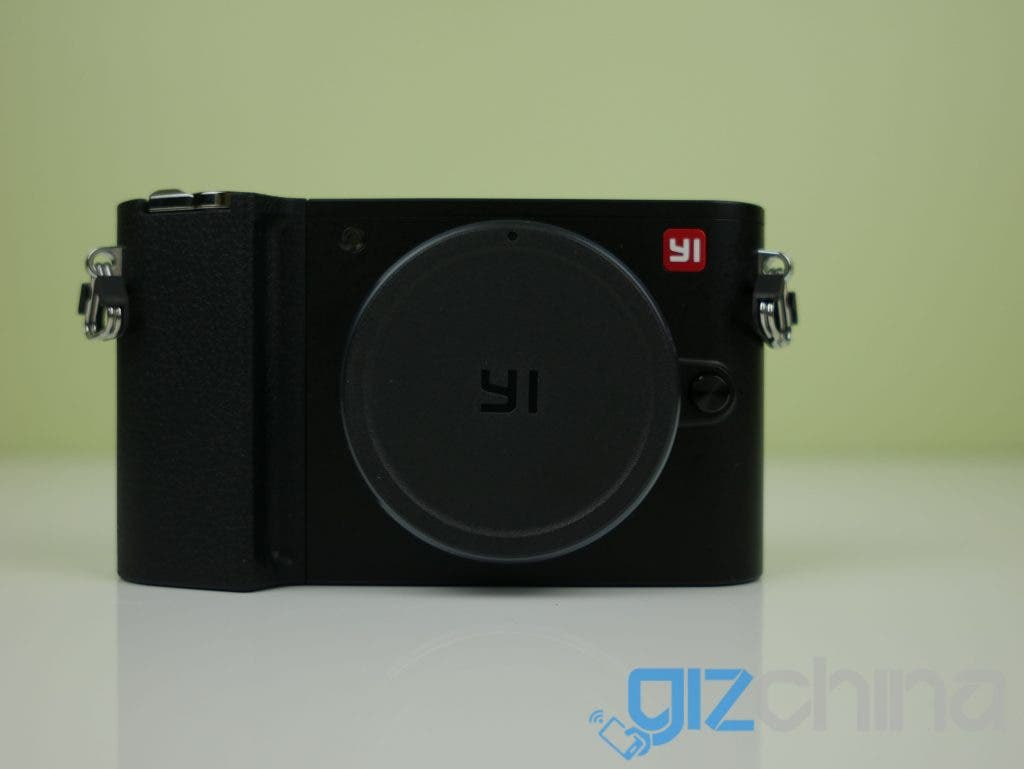 A second item to get out of the way: this is not a potential replacement for mid-tier DSLRs. It’s not weather sealed, does not have manual mode when shooting 4K (I’ll talk more about that later), and most importantly, does not have enough physical controls, (almost) everything is controlled via the touch screen.

Now with that out of the way, let’s get on with the build quality. 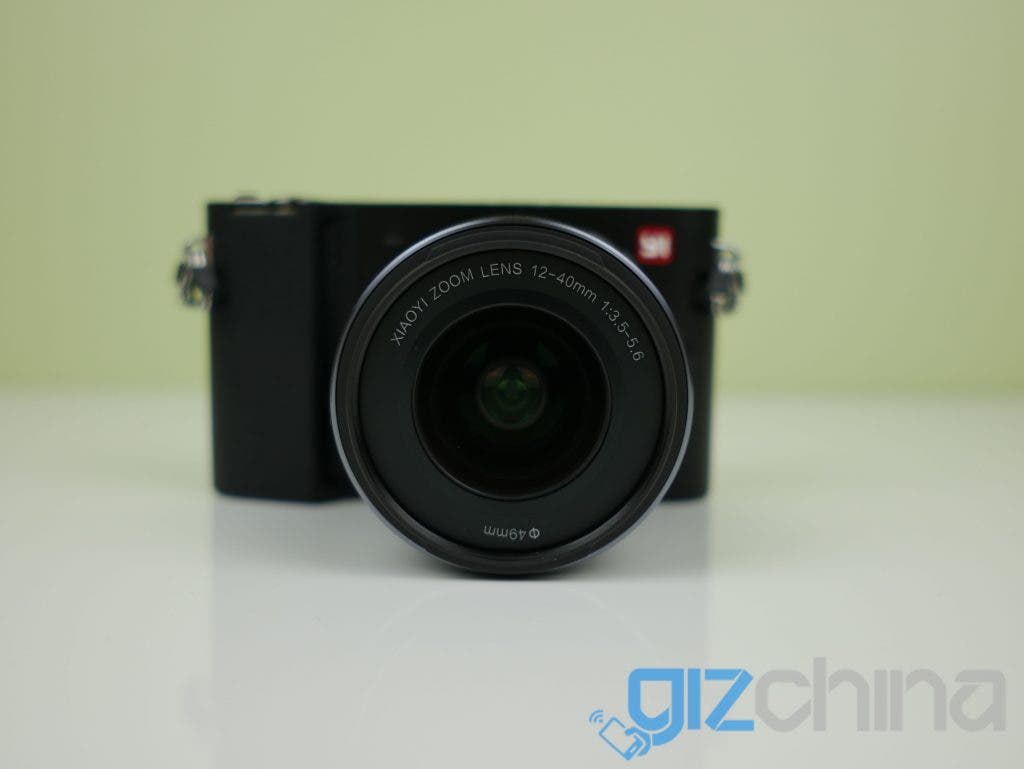 I did a double take when I saw this camera. It’s definitely a Leica lookalike, down to the red dot that graces every Leica body. The body is made of pretty high quality plastic and is also very lightweight, making it feel more like a point and shoot rather than a mirrorless camera.

On the top, you find the hot shoe, on/off button, and a selector dial for different modes. The video record button is nested within the selector dial, and can be a bit troublesome if you hit it by mistake without actually wanting to shoot video. There is also an extra dial for controlling zoom as well. Everything else is controlled through the 3″ touchscreen integrated into the body.

On the right, you find a removable flap that reveals the HDMI, SD card slot and MicroUSB. The standard screw in is found below the camera, and sadly, no microphone jack here. 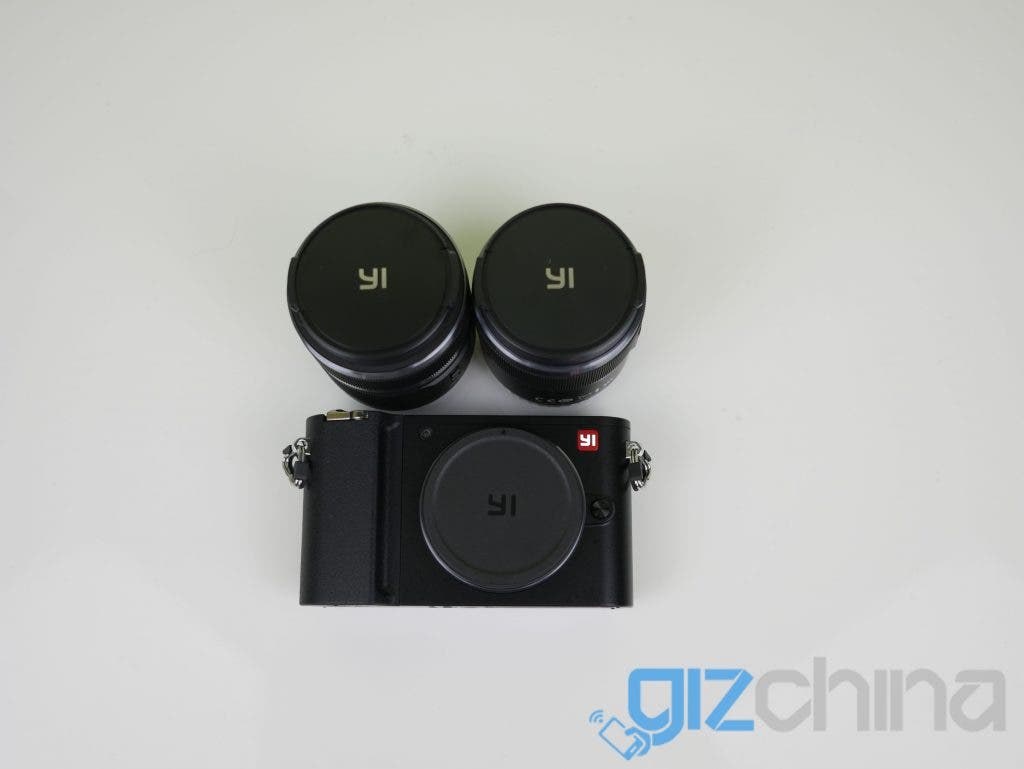 The camera includes the standard kit lens, but I opted for an additional prime lens for $100 more. Both the kit lens and prime lens are constructed mostly of plastic. The kit lens has a lock/unlock feature that allows you to shrink the size of the lens for easier portability. The prime lens looks normal, but perhaps the strangest part of the prime lens is the non-functional focus ring. You can’t focus the lens using that ring, it seems purely cosmetic. My Sigma and Panasonic kit lens were both compatible with the M1 which is very promising. 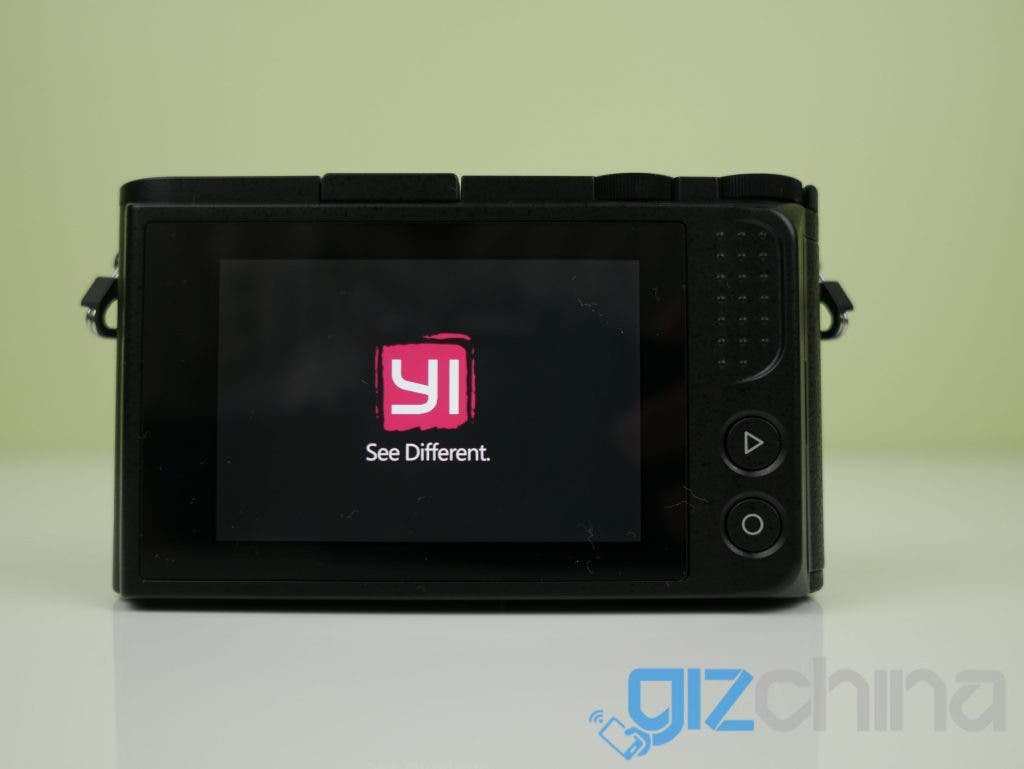 The first thing I did (after snapping a few test shots) was pair with the included smartphone app. This was an incredibly easy process that involved tapping “connect” and the phone automatically disconnects from existing WiFI and connects to the camera WiFi. My M1 immediately downloaded an update which took about a minute to install.

The lack of physical buttons means you interact with the touchscreen almost exclusively. As someone who lives in Canada, that instantly becomes a problem in the winter. I can use my Panasonic G7 outside with gloves on without issue, but not so with the Yi M1.

Cold weather aside, the UI is quite simple. Anyone familiar with smartphone UI will be completely at home here. You can change f-stop, aperture and EV by tapping on the setting and rolling the physical dial, but anything else requires some swiping. Swipe right for scene modes and left for settings.

ISO is, oddly enough, found in the settings menu instead of directly on the main screen. Changing ISO was a pain, so it was easier to play with the other settings to compensate. The UI speed and fluidity does not match Android or iOS, but it isn’t slow enough to frustrate users.

However keep in the auto mode and you should be fine. The camera defaults to snapping photos in JPEG format, but you can change it to RAW if you want. There is no option to save in both though. If your camera is connected to your smartphone via the app, you can download JPEGs off the camera onto your phone for sharing, but the app does not recognize RAW files. 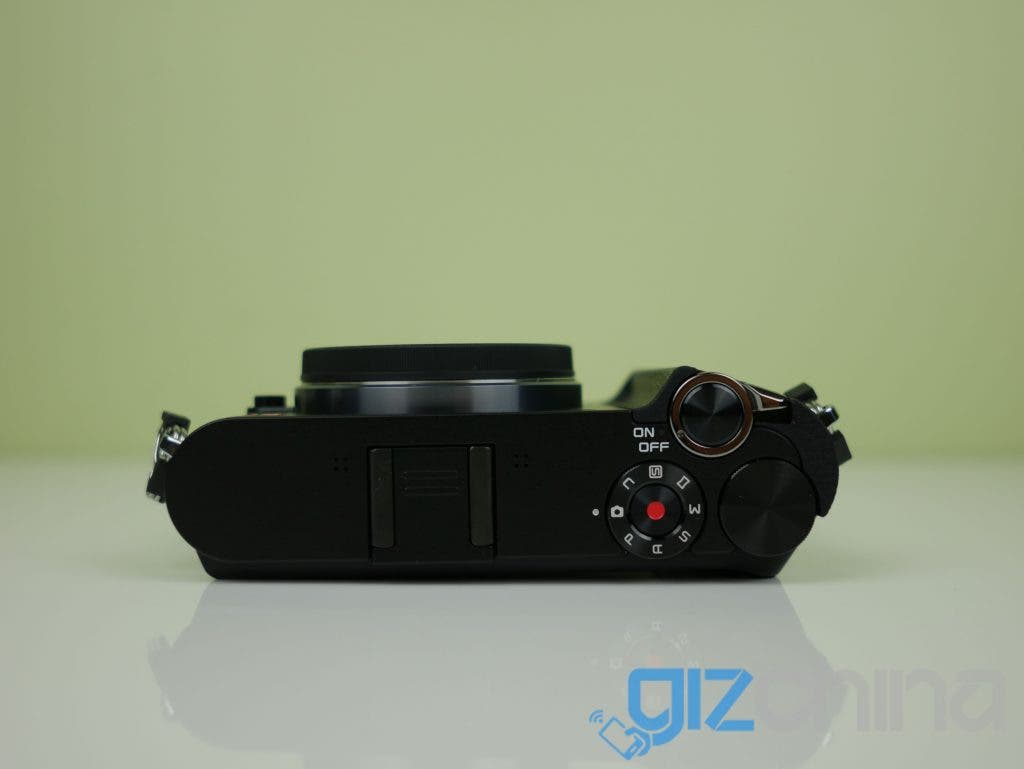 The time between turning on the camera to first shot was slightly below 3 seconds. It’s not a slow time, but lags about 1 second behind my Panasonic G7. However, I didn’t see any lag when snapping photos or shooting up to 4K video, so the chipset is definitely sufficient.

The Yi M1 uses a contrast detect autofocus system with 81 autofocus points. Autofocus is accurate in good light, but I found that it sometimes didn’t focus properly on the desired object, especially if the object had low contrast. Continuous autofocus was unuseable most of the time, as it never focused on what I wanted it to focus on. Keep the camera in AF-S for the best autofocus performance (depress the shutter button halfway to focus).

Low light focusing was difficult to achieve and I had a lot of trouble getting it to focus properly.

Let’s start with the kit lens. In auto mode, I was able to take very decent pictures quite easily with a ton of detail and natural colours. JPEGs taken in good lighting conditions definitely exhibit a lot more detail than any smartphone camera and many point and shoots. In low light the performance starts dropping. I saw quite a bit of noise/grain at ISO12800 and higher. However, JPEGs from the M1 compared to the Panasonic G7 left me underwhelmed.

I started shooting in RAW and immediately started seeing the difference. I could bring out so much detail in the photos and make them look better. Do note that some of the edits I did are purposely overexposed in order to show you the limits of each RAW file. 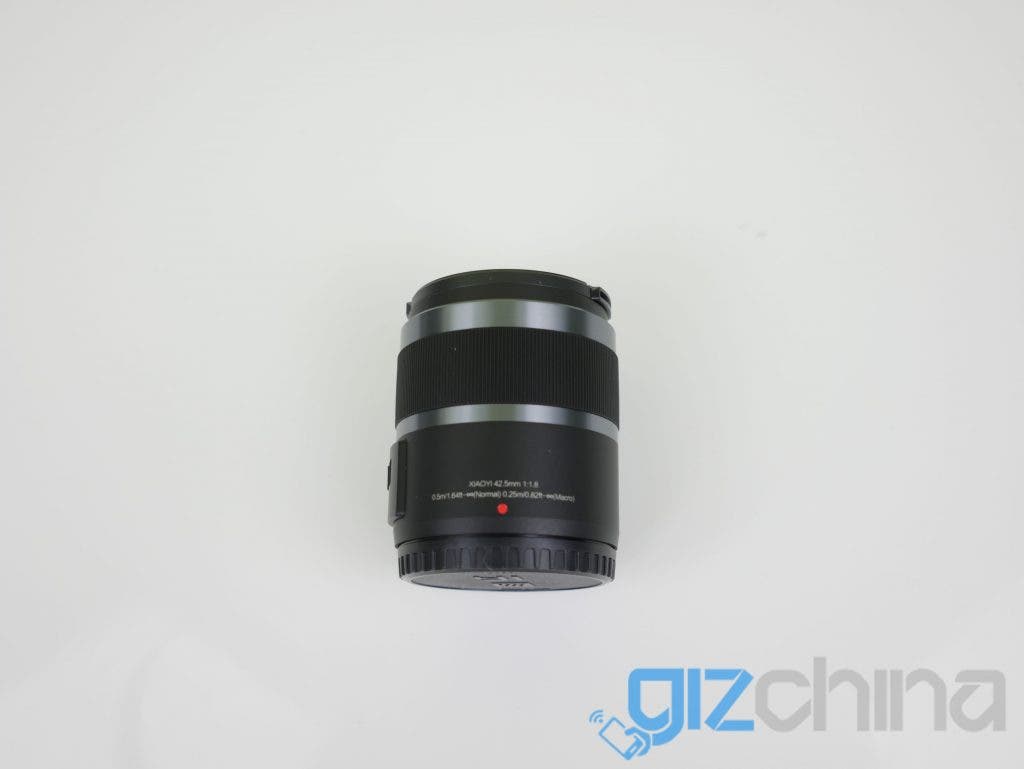 Moving on to the prime lens, pictures definitely look sharper than the kit lens and the Bokeh (blurred background) effect is quite strong. There is a switch on the lens to activate macro mode which allows you to take very sharp closeup shots (very close) and the pictures turn out quite beautiful.

Low light performance is better than the kit lens above meaning that low light shots turn out even better. 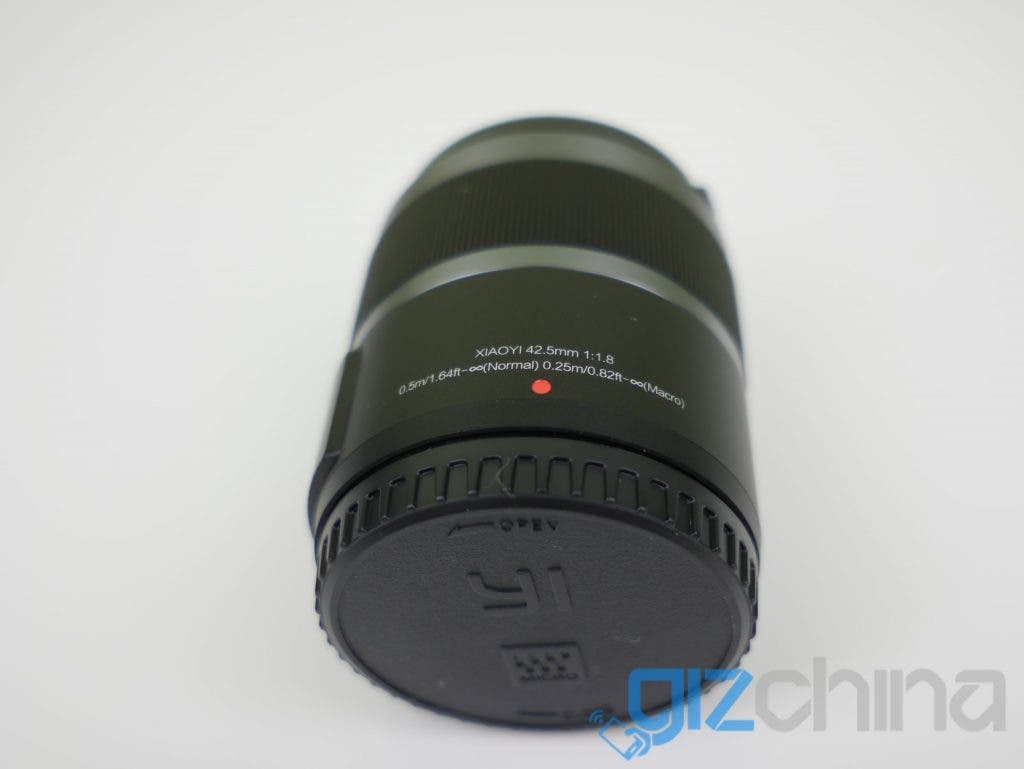 The Yi M1 still edges out my old Rebel T3 and my friend’s Rebel T5i in picture quality though.

Finally, I would like to reiterate that all the image quality testing was done with JPEGs straight out of the camera. Check out the image gallery below. More pictures coming soon!

Video is more my jam, and I was initially excited at the thought of a cheap, mirrorless, 4K capable camera, but this left me disappointed, the chief reason being that there is no manual mode when recording in 4K. The camera then compensates for every change of lighting that you come across.

As such there is a flickering that occurs every time the camera changes the settings to compensate which is quite an obvious distraction. In situations where lighting is constant (e.g. outdoors), 4K quality is actually quite excellent. Hwoever I still see a slight but noticeable difference in quality between my more expensive Panasonic G7 and the Yi M1.

The 900mAh battery is capable of taking around 390 shots before dying, which definitely isn’t the best. Filming a 4K video for about 15 minutes ate about 54% of the battery capacity. You charge the battery by plugging in a MicroUSB port into the camera itself, so there’s no need for a separate battery cradle. It takes about 2 hours to charge completely, which is quite a long time for such a small battery.

You still see people with smartphones bringing out point and shoots at events like weddings or special get togethers, and in my mind, this is the perfect replacement. Not only is it comparable in size (DSLRs are much larger), but the camera and user interface are very simple and touch friendly. That being said, this is not a cheap camera, starting at $350, this would be in the upper ranges of point and shoots, edging into entry level DSLR territory. Probably the biggest problem this segment of users would encounter would be the autofocus. Autofocus here isn’t the greatest, so some users might find it difficult to get a good shot.

The M1 has replaced my phone camera when I bring it out to special events. Get togethers, outings, dinners, weddings. Bringing my large mirrorless Panasonic is conspicuous at weddings and could be seen as trying to upstage the official photographer (depending on how big his ego is). However, the M1 is small, compact, and has a completely silent mode, so I can upstage the wedding photographer without him even finding out, getting crisp photos of the wedding rings. Thanks Xiaoyi.

You can buy the Xiaoyi M1 mirrorless camera here, I recommend the cheaper kit lens version instead of the more expensive one with the prime lens simply because there are a lot of M43 options.

MEROSS Smoke and Water leak sensors: more robust than ever