During the past few years companies have shifted their efforts towards creating smartphones with as much RAM as possible, aiming to offer better multi-tasking support and even better performance.

Vivo was the first company – last year- that released the first 6GB RAM smartphone in the world, with Samsung, Huawei, OnePlus, and Xiaomi releasing in the coming months their own smartphones with 6GB RAM. However there’s an ongoing question that comes to our minds concerning this matter: do we really need such a large amount of RAM on our smartphones? 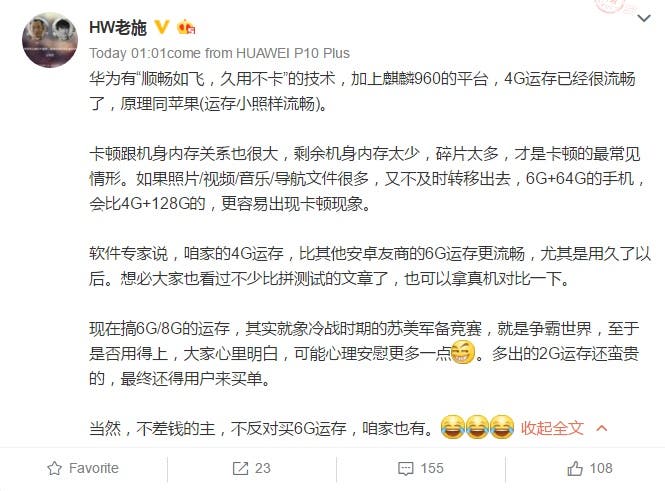 According to a Huawei official, no we don’t. Lao Shi an executive of the Chinese company recently mentioned in his Weibo page that 4GB of RAM is enough for a phone to run smoothly. According to tests held by the company, a lot of Huawei phones with 4GB of RAM (paired with the Kirin 960) can perform better over time compared to the competition with 6GB of RAM! What’s important in this is to optimize the operating system in an efficient way and he uses as example how iOS doesn’t need a large RAM to run smoothly!

Note that if you add an extra 2GB RAM to a 4GB RAM smartphone its price rises exponentially and this is not depicted in the phone’s performance in everyday use. Obviously Huawei has several 6GB RAM smartphones, but what the executive says is that their performance isn’t that impressive when compared to their price.