I guess no one knew this small company a couple of months ago but now almost everybody is talking about them – and for a VERY good reason if I might add. Geotel is one of the new additions in the mobile phone industry during the past few months and they already managed to produce a very decent budget Android smartphone, called Geotel Note. Have a look at its review to find out our thoughts about it. 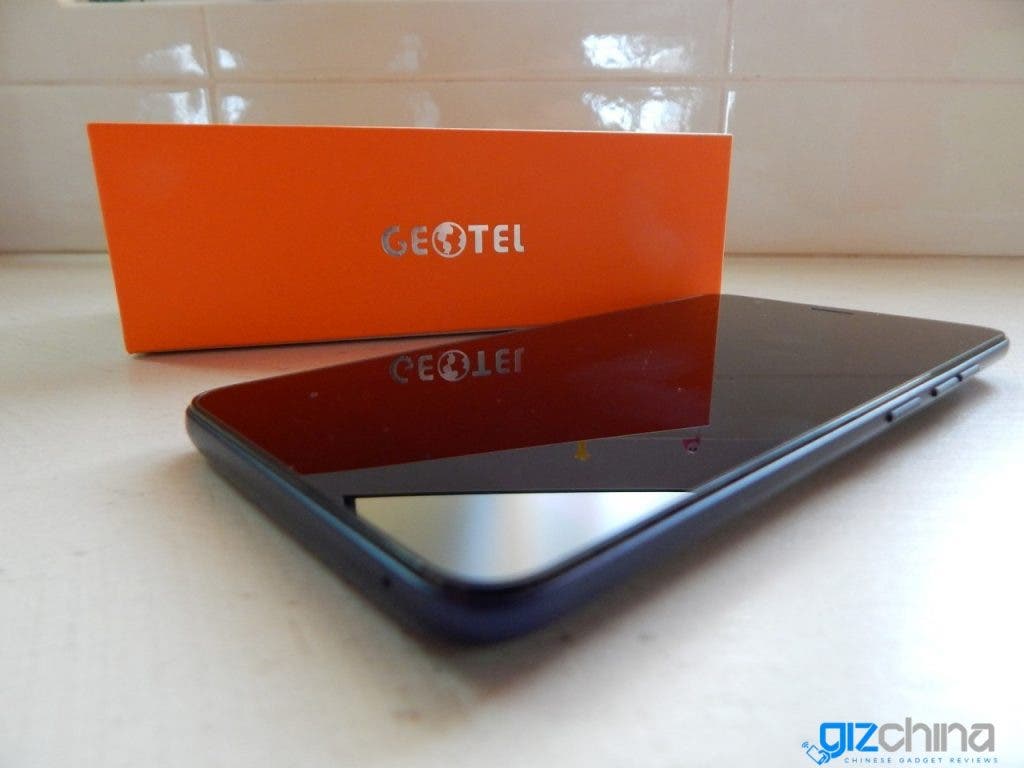 It’s always typical to expect nothing from a… budget Android smartphone when it comes to its package, but this isn’t the case with Geotel Note, since the device comes with several extra accessories, such as a screen protector and a hard plastic case. 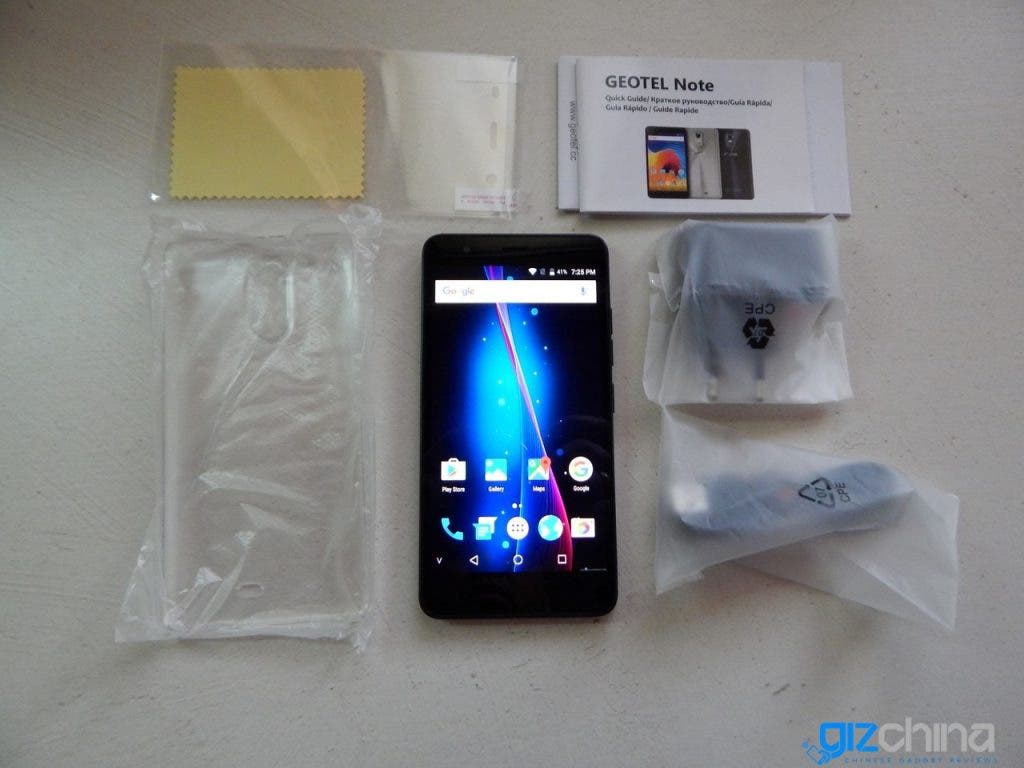 Pretty decent package for this price, I have seen less extra accessories given for much more expensive smartphones, so I cannot complain. 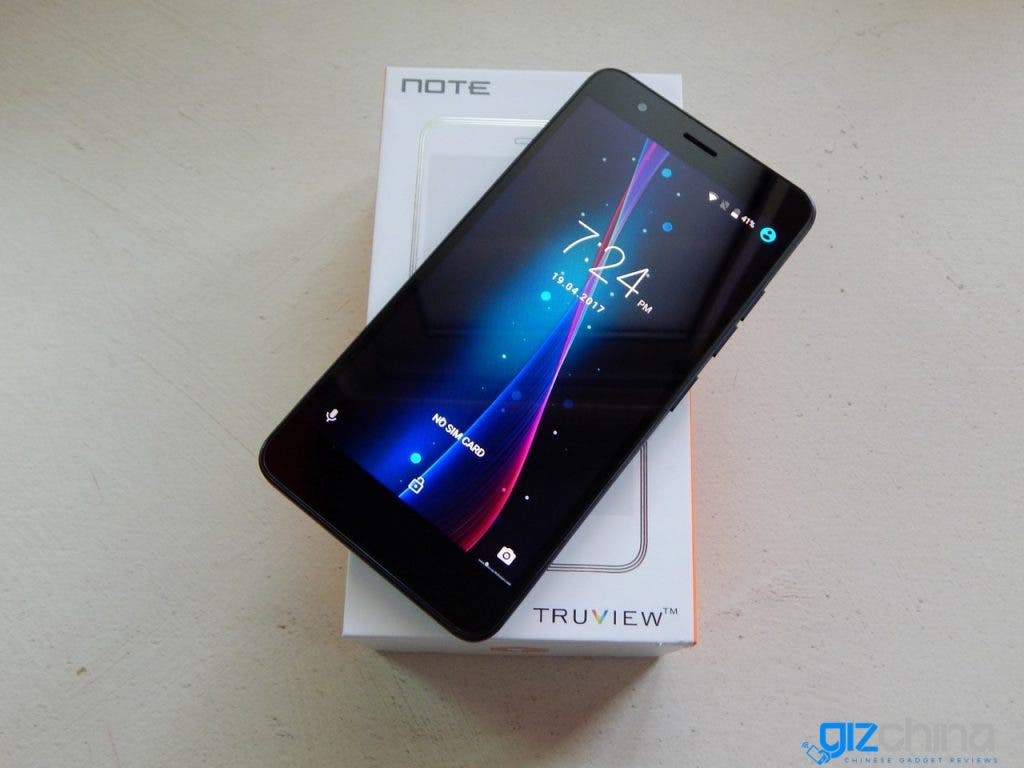 OK, let’s see how this little guy performs in everyday use. First of all, it’s made entirely out of plastic but still it doesn’t feel cheap at all. On the contrary, it has a special glossy finish on its back and the display (5,5 inch –  HD resolution) looks and feels impressive for a phone of this category. 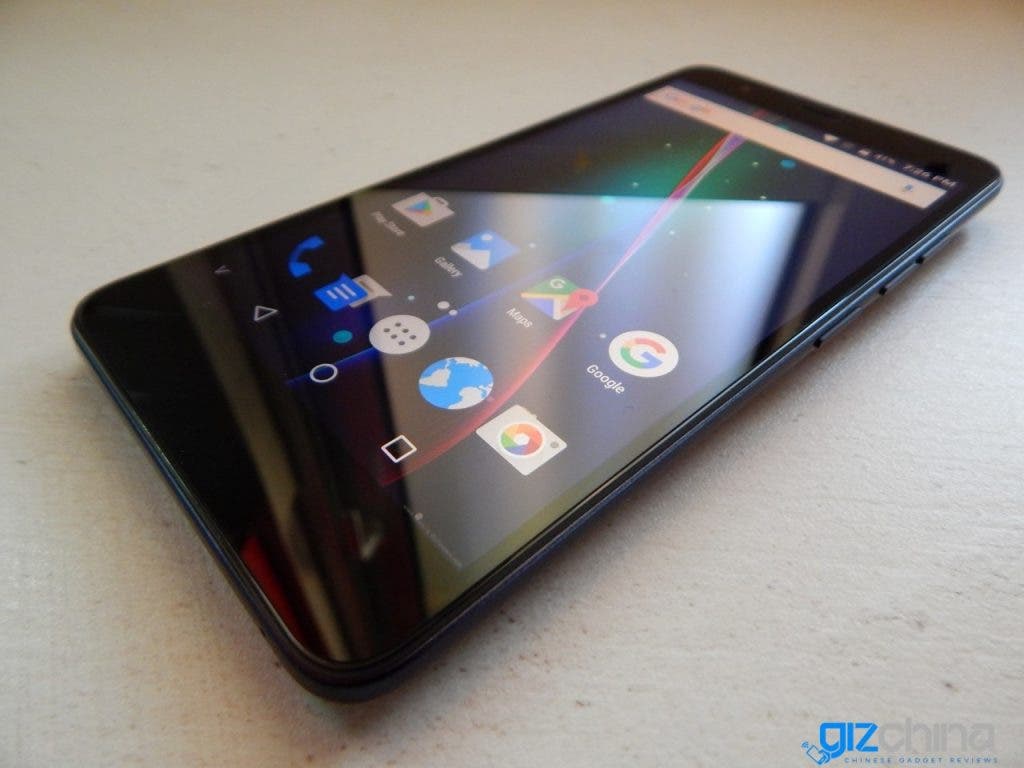 The Geotel Note packs an 8Mpixels front facing camera (f/2.0, 84 degrees wide angle), along with notification LED next to it, and customizable on-screen navigation keys on the front (yes, you can swipe to make them disappear and re-appear if you wish or change their placement). 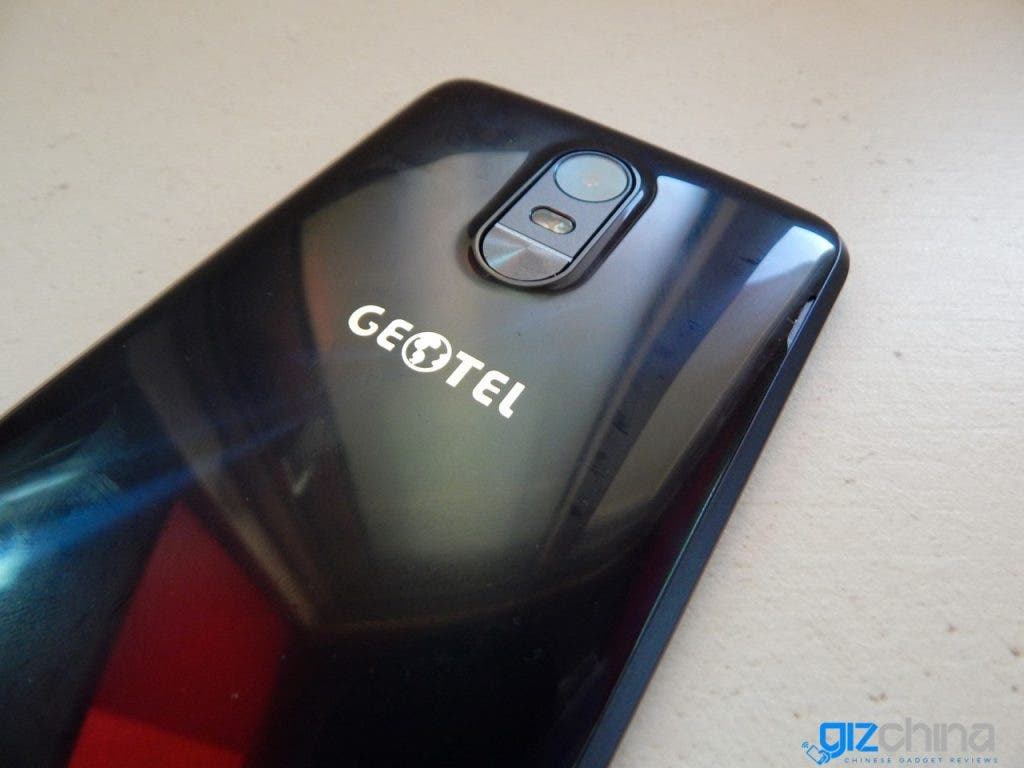 As we mentioned earlier, one of its most premium features is the glossy/shiny back plate that impresses everyone who looks at it, but on the other side – beware- it’s a huge fingerprint “magnet” as you will see from the images below. 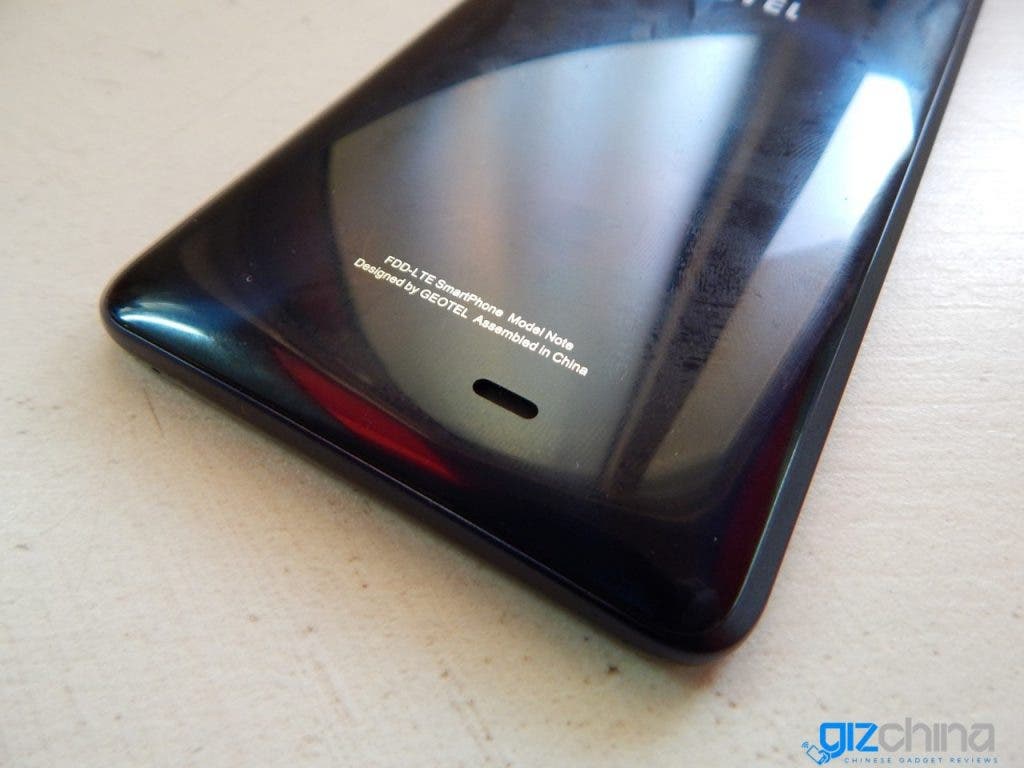 Below the back plate you will find room for 2 SIM cards along with a micro SD slot and a fully replaceable 3200 mAh Li-Ion battery. In the same area, you will also find the main camera of the device, a 13Mpixels shooter with LED flash and several functions (autofocus, touch focus, video recording, f/2.0, 5P camera lens etc.) 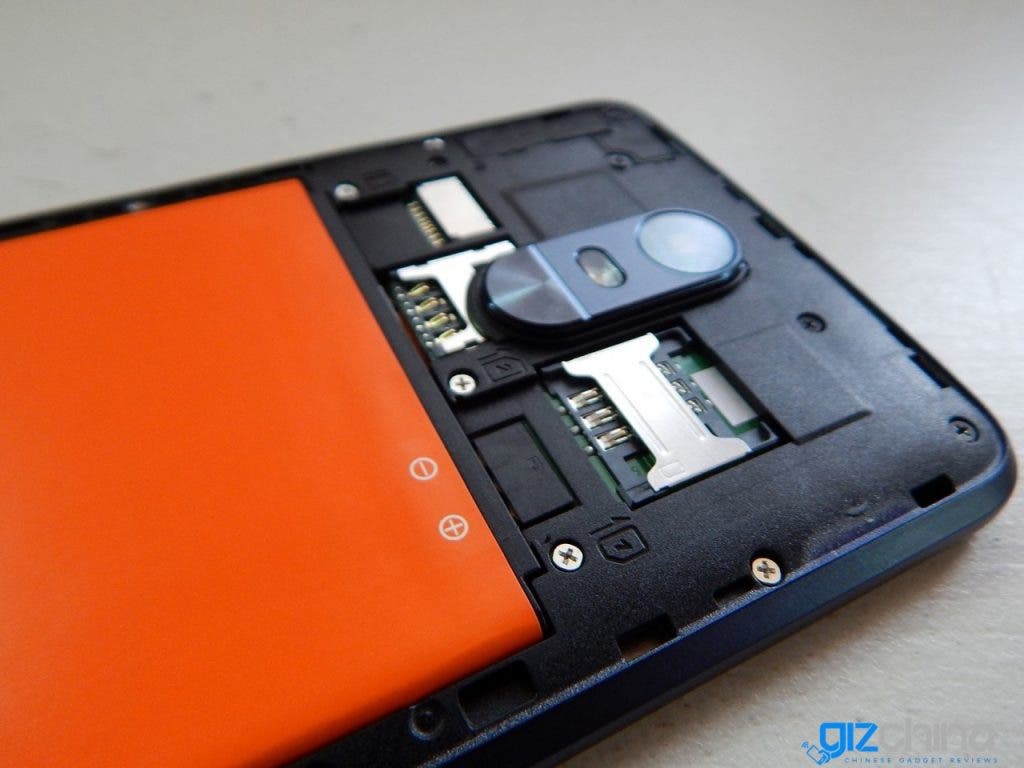 I really liked the sound from its speaker for use with ringtones, but the loudspeaker could be a bit better in terms of quality and volume output during phone calls.

On the other hand, I had no problem with the GPS signal of the device, so I could use it with Google Maps with no problems at all. The same goes for its WiFi/Bluetooth signal, nothing to impressive but also, nothing to blame it for. 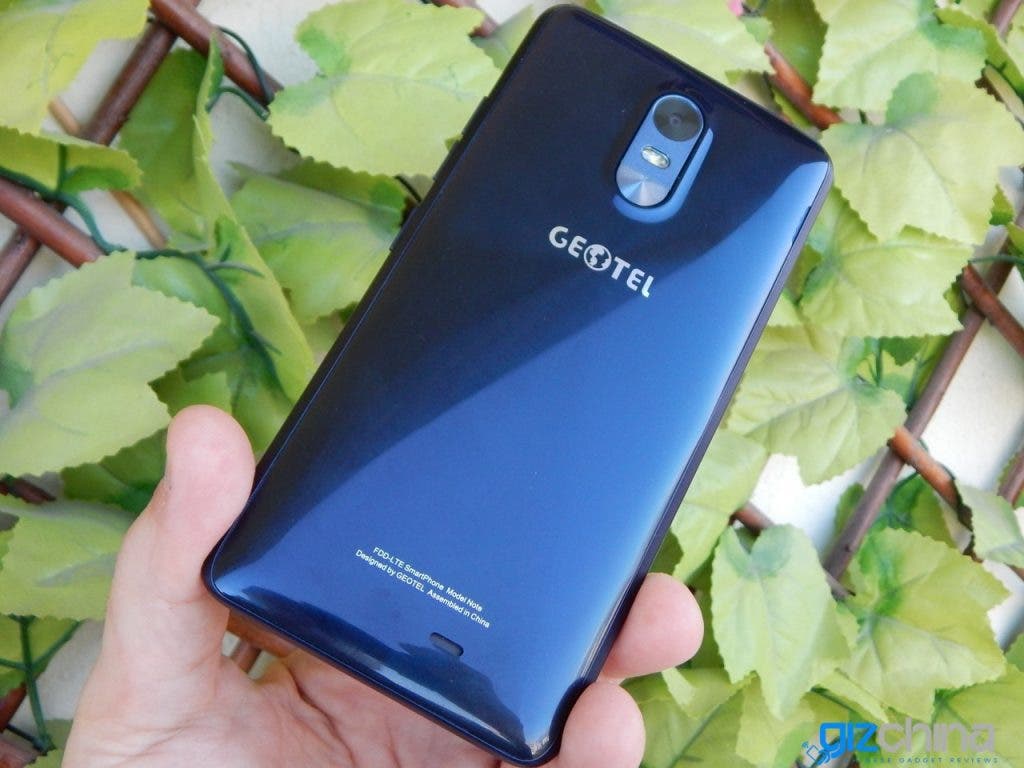 Geotel Note 4G has used a removeable 3200mAh battery to power MT6737 SoC and battery life understandably won’t be great. After some testing, I was able to get around 3-4 hours of screen on time before the battery bar hit 0% and this was almost exclusively light use; web browsing, social networking and messenger with the occasional light game and photo.

Let’s have a look now at its software. The device runs on stock Android 6.0 Marshmallow and it’s equipped with a quad-core MTK6737 chip, along with 3GB of RAM and 16GB of expandable storage. The device has average benchmark scores that clearly depict on its everyday performance but no one can ask for more, given the fact that its price is under 90$ most of the time.

You will surely enjoy the usability of stock Android 6.0 Marshmallow (no significant lags, no extra battery hog applications, no bloatware 3rd party apps) and the device also comes with some extra gesture/motion controls such as “5 fingers back”, that enables us to return to Home just by shrinking the display with 5 fingers.

You can’t possibly expect awesome imaging results from a budget Chinese smartphone, no matter what its camera resolution might be. The Geotel Note has a decent main camera, one that can offer quite pleasing photos in daylight conditions, but still most of the time its dynamic range is usually off and sometimes the colors may look washed out. Don’t complain however, these are good photos for a 90$ smartphone, be sure of this.

I wouldn’t expect much from its selfie camera however. It’s has an 8MP sensor with f/2.0 aperture and 84 degrees wide-angle view but still it is plagued by slow viewfinder speed and average ISO in low light conditions. Don’t be alarmed: you will be able to shoot great selfies for social media sharing, but -as I told you- I wouldn’t expect something more.

What Could Be Improved

I think Geotel has a winner here. I always try to judge a smartphone for its price and functions as a whole, and the Geotel Note 4G is one of the most decent, budget Android smartphones around. It surely deserves your attention if you are searching for an affordable smartphone with some decent specifications. 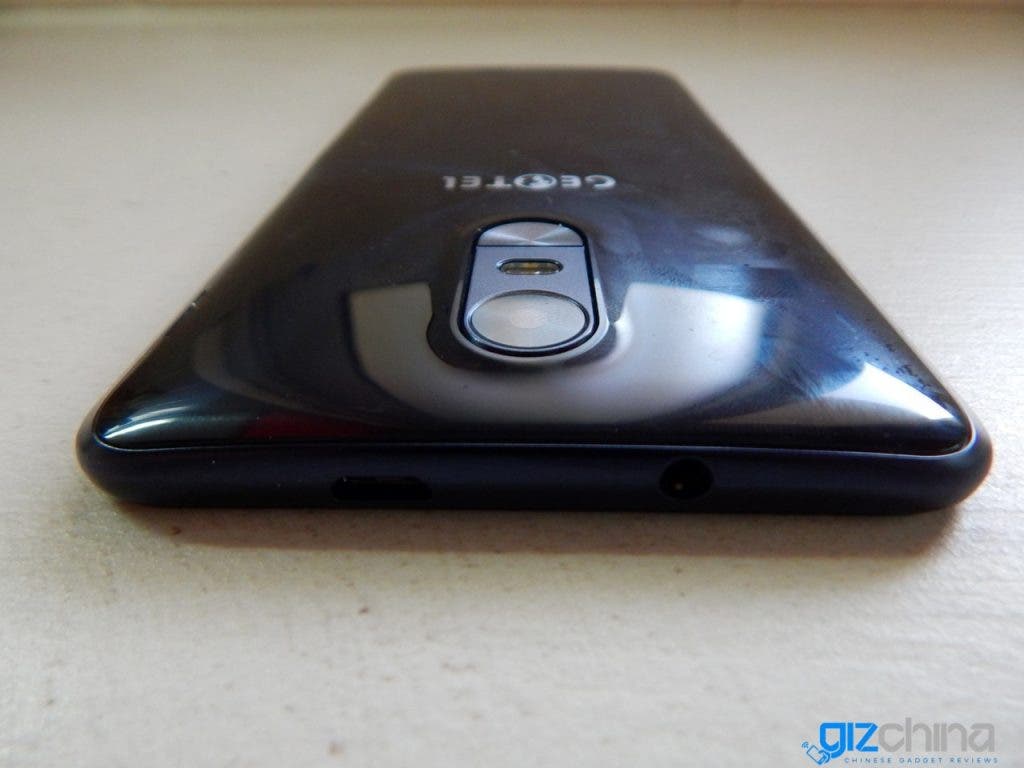 You can find more info on the device if you visit the official Geotel page.

Next Rugged Bluboo R1 spotted in HongKong plus test video