One of the most awaited smartphones of 2017, the Xiaomi Mi 6, is going on sale on the 28th of April. Registrations are open on Jingdong, JD.com, and currently, the count of registrations has surpassed 1 million. The number is till going higher as this post gets written. 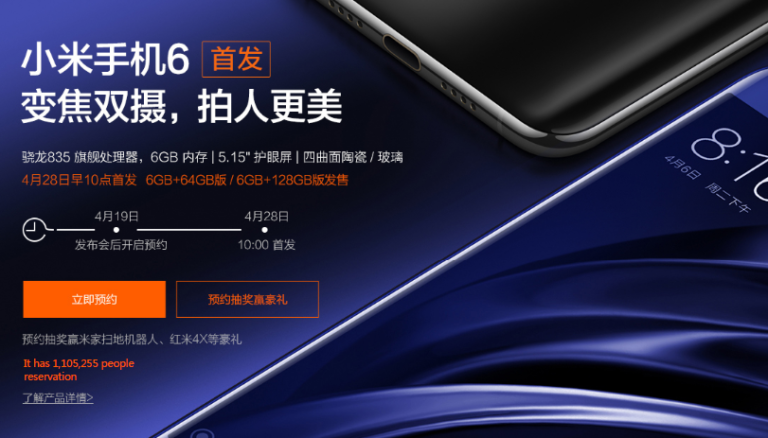 Slated for release to consumers no the 28th of April, the Xiaomi Mi 6 currently has the most high end specs at not such a high end price in China. Known for offering quality products at never seen before price, the Mi 6 seems to be a killer device on paper. It features a Snapdragon 835, the latest in the line of Qualcomm’s mobile SoC’s coupled with the Adreno 540 GPU.

It is available in two variants, the 6GB RAM/64GB internal memory and the more powerful 6GB RAM/128GB internal memory. The Mi6 has a 5.15 inch 1080p display with a pixel density of 428 ppi. It features a dual camera setup in the rear with 12MP wide angle + 12MP telephoto camera and an 8 MP camera in the front. The Mi 6 features an ultrasonic fingerprint scanner in the bottom bezel in the front flanked by the capacitive buttons.

And these 1 million registrations recorded are only from Jingdong. We have no figures from any other websites that are selling this device. But it is pretty evident that the registrations will easily exceed 2 million. And like many other Xiaomi devices, it’ll be difficult to get a hand on the Mi6.