As the OnePlus 5 hype train continues to build steam, more rumors and leaks have started appearing all around. This time however, the device had its specs and price listed online by none other than Oppomart themselves. There’s even an image of the leaked rear render and everything.

Now of course this might not be 100% accurate, it might not even be slightly accurate. Make sure to this with a grain of salt, maybe even a jar of it if you’re so inclined. Now that you’ve prepared your salt, let’s take a look at the leaked specs of the OnePlus 5. 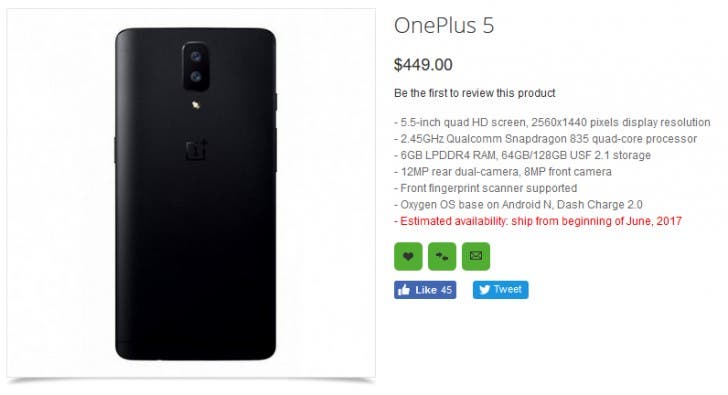 The device’s display will be a 5.5-inch QHD display, and we’re willing to bet it’ll be another one of those Optic AMOLED displays too. Moving on, we’ve a got a standard flagship Snapdragon 835 processor @ 2.45ghz, as well as 6GB of RAM and 64GB or 128GB of UFS 2.1 storage.

Along with that, the OnePlus 5 will also come equipped with a pair of 12MP cameras on the rear and an 8MP shooter on the front. The fingerprint scanner will once again be on the front of the device. It’ll run on Oxygen OS based on Android N out of the box, and it’ll also have OnePlus’ Dash Charging as a standard.

While this leak hasn’t revealed all of the OnePlus 5’s specs, it does give us some insight into its possible final specs. The device also has a price tag of $449 attached, as well as an estimated shipping date of the beginning of June. That’s only a mere month away now, which means we could be in for an interesting few weeks.

Next UMIDIGI Crystal might have a Snapdragon 835, 6GB+128GB version