Last week, Sony released their award winning Xperia XZ Premium in China. The latest from the family of Xperia smartphones are the Sony Xperia XZ1​, XZ1 Compact and X1 that have leaked online.

Said to be scheduled for a September 1 release at the 2017 IFA in Berlin, the leak shows the specs of all three of the phones.

The Sony Xperia XZ1 is rumored to sport a 5.2 inch 1080p display. The phone will be powered by the Qualcomm Snapdragon 835 coupled with 4GB of RAM with no word on the on board storage. The phone will be fueled by a 3,000mAh battery. 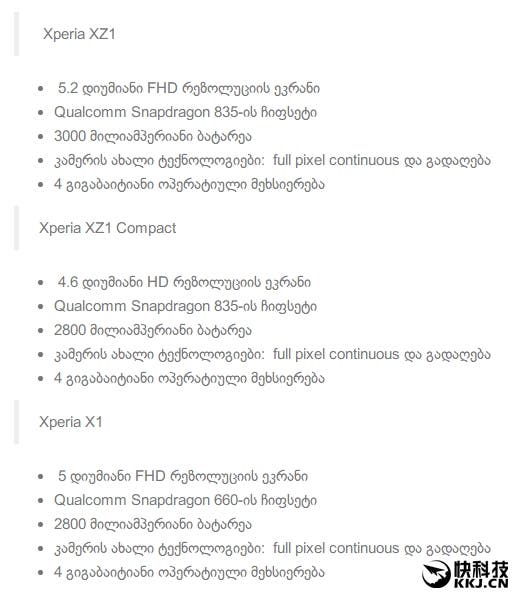 The next in line is the Sony Xperia XZ1 Compact, which, surprisingly, also sports a Snapdragon 835 with 4GB of RAM and a 2800mAh battery. As the name suggests, the phone will sport a 4.6 inch display with a 720p resolution. Sony has been famous for making compact phones that, even though small in size, mirror the specs and performance of their bigger siblings. We hope the same form the XZ1 Compact.

The last of the bunch is the Sony Xperia X1, which, from what we can judge from the specs, is a mid ranger. The X1 is powered by the recently launched Qualcomm Snapdragon 660 chipset coupled with 4GB of RAM. It will sport a 5 inch 1080p display and house a 2800mAh battery.

There is no information as to when we will get to see all these phones on the market, so stay tuned!

Next Nubia Z17 to have a pressure sensitive display, teases Nubia GM