OK we all know that the so called “registrations” don’t necessarily mean that people are going to by the thing, but still it shows some of the public’s interests regarding a most awaited smartphone. That’s the deal with the OnePlus 5 and its official registration page at JD.com that currently stands at 363750 reservations and… rising. Note also that these numbers are just for the JD.com reservations and they don’t include similar promotions from other retailer stores all over China. 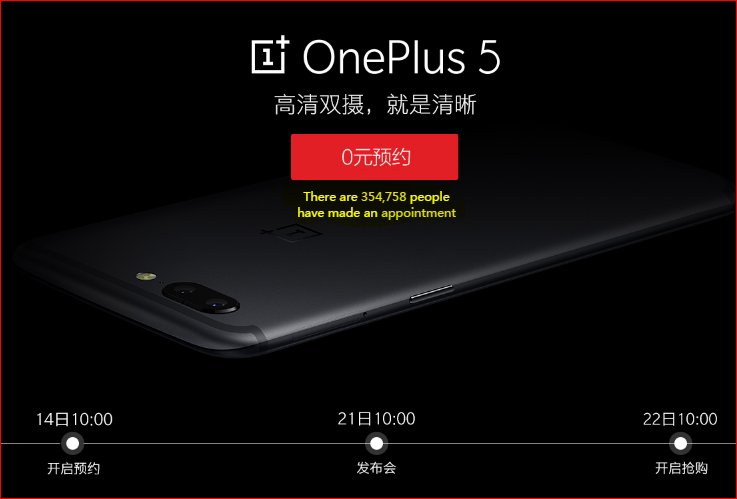 Remember the phone hasn’t been unveiled officially yet, as this is expected to happen next Tuesday (June 20) in various events all over the world from New York, to Beijing and India.If these numbers continue to rise then they may even surpass 1 million in the end, proving that “hype” over a smartphone can be a very powerful motive.

The OP5 is expected to feature a Snapdragon 835 chip and 8GB RAM on one of its versions, along with Android 7.1.1 Nougat, dual camera, 64GB/128GB storage, full 4G/LTE+ connectivity and other impressive specs, but its design will surely remind us of the iPhone 7 Plus model as we have all seen by now.

Let’s wait a few more days and see what happens…

Previous Xiaomi Mi MIX 2 is coming along with a Mi MIX 2 Lite variant?

Next Elephone P8 Presales Kick Off - Get a $50 Coupon Now!