The Samsung Galaxy Note 8 is one of the most anticipated phablets of 2017. With rumors rife about the Note 8 featuring a fingerprint scanner embedded in the display, and subsequent reports stating that Samsung has failed in doing so, it’s difficult to determine how the note 8 will be. The latest render that has leaked, shows the Note 8 sporting a horizontally aligned dual camera setup.

The render that has leaked shows the front of the Samsung Galaxy Note 8 with the infinity display that was launched with the Galaxy S8 series. The back of the phone shows a horizontally aligned dual camera setup with the fingerprint scanner placed right next to it, something Samsung did on the S8 and received criticism for it being uncomfortable to use. The back seems to have a glossy finish, which to be honest looks pretty good. 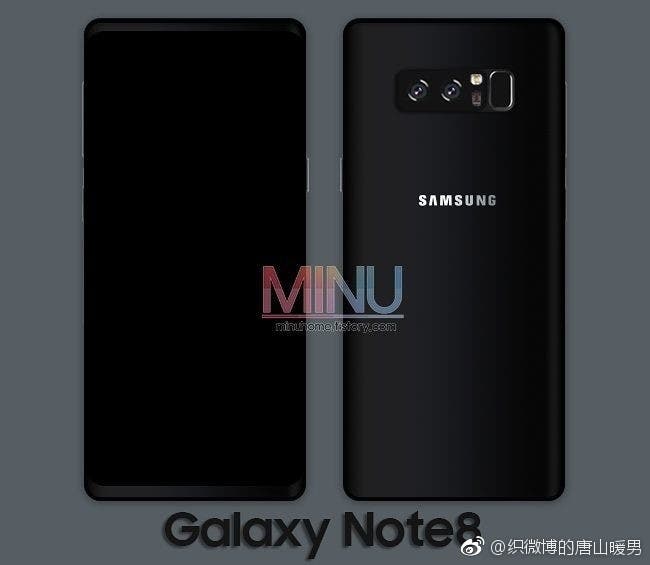 On the spec front, there is very little known about the Note 8, but from what rumors say, it’ll sport a 6.3 inch display and will either feature the Qualcomm Snapdragon 835, or the Samsung Exynos 8895 chipset. It is expected to sport 6GB, or even 8GB of RAM, although we believe that it will mirror the specs of the Galaxy S8, and sport 4GB of RAM. There is no word on the sensors Samsung plans to use in the Samsung Galaxy Note 8.

With the launch of the Apple products nearing, we can assume that Samsung will launch the Note 8 around the same time or before. Watch this space for more!

Previous Moto Z2 pops up on GFXBench(again) just a few days before the rumored launch!