Well I guess this looks interesting, don’t you think? Meizu Pro 7 and Pro 7 Plus were officially unveiled last week – as the world’s first Helio X30 equipped smartphones but this… didn’t last long. Earlier today a “Meizu Pro 7” model appeared on Geekbench for some performance measurements and according to its listing, it was equipped with Qualcomm’s Snapdragon 835 chipset!

If you take a look at the listing you will see that the purported model is equipped with 6GB of RAM, posting a single-core score of 1969 and a multi-core one of 6536 – which is approximately as other competitive Snapdragon 835 smartphones. 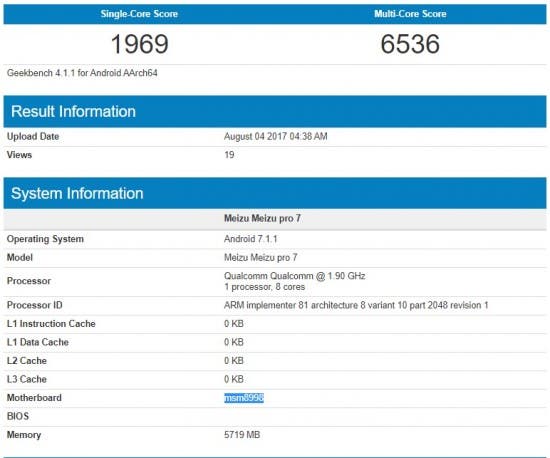 So what is happening? Some say that Meizu could be preparing another variant of their flagship (in case they’re not happy with Mediatek’s supply rate) and do what Samsung does with their Galaxy S8 flagships: releasing 2 variants, one with Snapdragon and one with Exynos SoC. Some others however say that this could be just a prototype from back when the Chinese company was still deciding which chipset to choose.

In case you missed it, the Pro 7 comes with either the Helio X30 or the Helio P25 and the Plus sports only 10nm Helio X30 chips. Do you think we will see another variant with SD835 SoC?