Asus Zenfone 4 is making its 2nd appearance on GFXBench now. Earlier it appeared with 6GB of RAM and the latest benchmark shows the flagship with 4GB of RAM. This leak comes right after the Zenfone 4 Selfie and Selfie Pro were leaked. 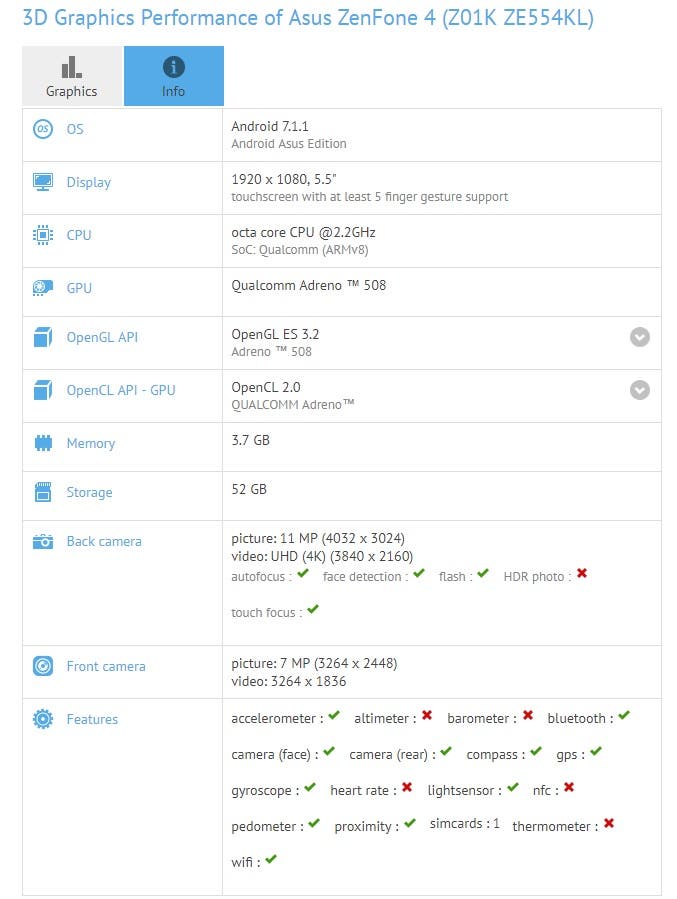 The benchmark gives an in depth look at the specs of the smartphone. It features a 5.5 inch display with a 1080p resolution powered by an unknown octa core processor by Qualcomm. Judging from the GPU, the Adreno 508, we can speculate that the Zenfone 4 will sport the Snapdragon 630. It sports 4GB of RAM and 64GB of onboard storage.

In the camera department, the primary camera is a 12MP sensor capable of 4K video and the front has an 8MP sensor. There is no news on the battery that will fuel the Zenfone 4, but we don’t expect it to be any less than 3000mAh. Asus is expected to announce their latest line of Zenfone smartphones on the 19th of August. So we can assume that we get to see the likes of the Zenfone 4, Zenfone 4 Selfie and Selfie Pro on the 19th.

The Asus Zenfone 4 Selfie series is targeted towards the much growing market of selfie cameras, with both the models featuring dual camera setups on the front. Watch this space for more!

Previous Xiaomi Redmi Note 5A image leaks, along with specs

Next Vernee Thor Plus to pack a 6200mAh Battery in 7.9mm Body