It was about time we saw the first Geekbench results of the upcoming Galaxy Note 8 phablet and they definitely look impressive. The prototype that appeared on Geekbench’s database has model number SM-N950F, which will be destined for Europe and other global markets in a single-SIM iteration. 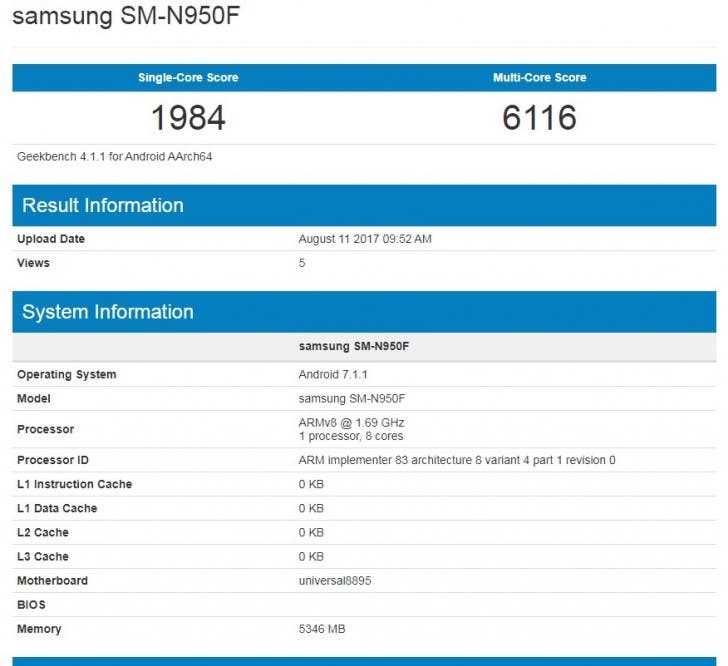 According to its listing, the upcoming Note will be equipped with 6GB of RAM and will be probably Samsung’s first high-end smartphone to reach that amount, offering improved multi-tasking capabilities. Geekbench says it’s powered by the Exynos 8895 chipset, the same one inside the similar SM-G950F version of the Galaxy S8, but there will be another variant equipped with Snapdragon 835 SoC for the US market.

The Note 8 prototype runs on Android 7.1.1 Nougat with Samsung’s special UX interface but when launched it should run on Android 8 (or will get the update when available). The professional phablet should also be equipped with a 6.3-inch 18.5:9 Super AMOLED Infinity Display, an S Pen stylus of course, and a “safe” 3,300 mAh battery, along with dual 12 MP camera setup on its back with fixed optical zoom, OIS, EIS, etc.