Good news for all those Mediatek fans out there I guess, as the Taiwanese chip manufacturer, has started sending out invites for an event, scheduled to take place on August 29 – where the Helio P23 and Helio P30 chipsets will be unveiled. 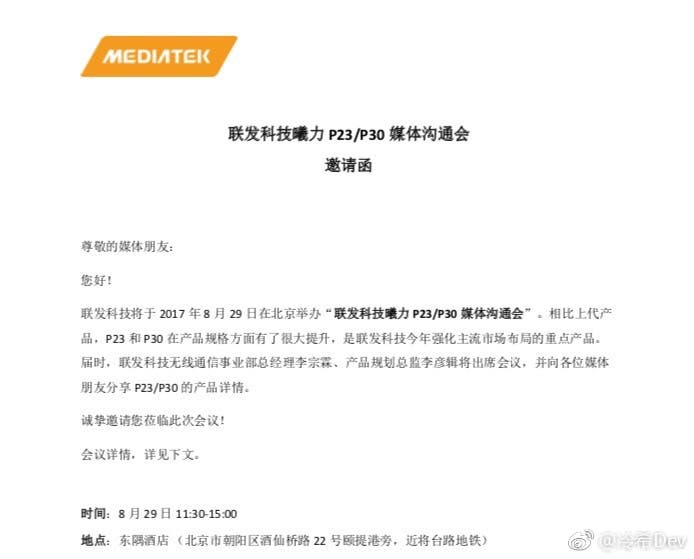 These are the two newest members of the P-series family of chipsets, targeted at smartphones with slim profiles and mid-range specs, providing improved battery efficiency without skipping on performance.

According to recent rumors, the Helio P23 will be an octa-core 16nm chip built by TSMC, supporting 2K displays, dual cameras, and have Cat. 7 LTE.

The more powerful Helio P30 will also be manufactured by TSMC using a more efficient 12nm process and it will be equipped with 4 Cortex-A72 cores clocked at 2.0GHz and 4 Cortex-A53 cores clocked at 1.5GHz, along with full Cat. 10 LTE speeds compatibility.

The imminent launch of these 2 chipsets has made several manufacturers such as Meizu, OPPO, Vivo and Gionee to sign up for the Helio P23/P30 already and a lot of them are already preparing their new devices, scheduled  to be released by the end of the year.

Previous Sharp Aquos S2 sells out in China, will be available again on August 18

Next Sony Xperia XZ1 leaks in all of its glory