It seems that soon Gionee will climb aboard the bezel-less 18:9 display “train” like most manufacturers do during the past year. As the latest leaks suggest, the company is working on a new mystery phone with model number SW17W08, that appeared earlier on GFXBench database. 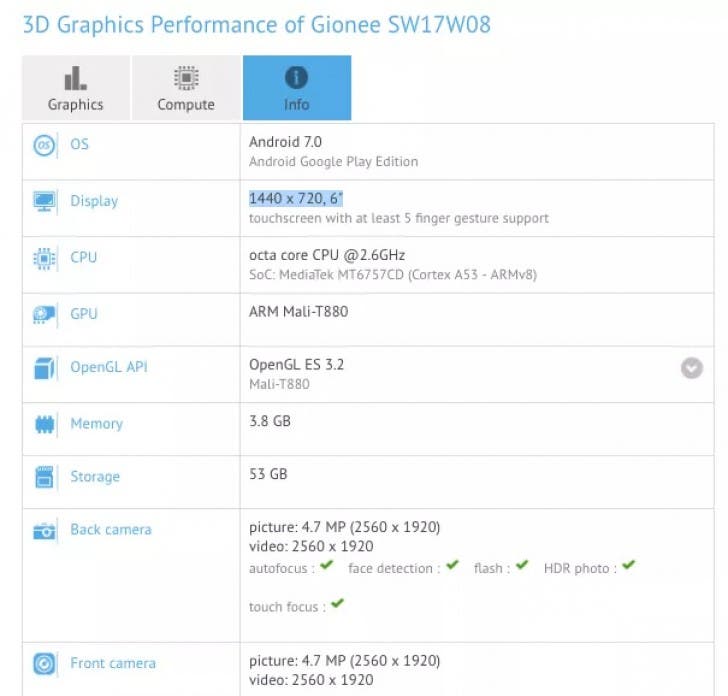 According to the listing, the upcoming device sports a 6-inch 1,440×720 18:9 touchscreen, runs Android 7.0 Nougat, and is powered by MediaTek’s Helio P25 chipset, boasting a 2.6 GHz octa-core Cortex-A53 CPU and a Mali-T880 GPU. It also offers 4GB of RAM and 64GB of storage, while both front and back cameras are said to be 5 MP – but the main camera should be larger – I guess this is a mistake on the benchmark and I’ll explain why below:

All of the above suggest we have a new mid range model coming our way, but still there are rumors suggesting that this model will be equipped with a dual camera setup, like in the Gionee A1 Plus model – which has a 13 MP and a 5 MP sensor on the back – and the benchmark is only seeing the latter.

That’s all for now, we will let you know the moment we have more info on this new device.

Next First video look at the new Elephone S8