Gionee mobile had announced its first quad camera phone some months back and now the company seems to be working hard on a device from the same Gionee S series and it goes by the name –Gionee S11.

The Gionee S11 has been spotted on GFXBench database along with expected specifications. The device would come with a 6-inch Full HD+ FullView AMOLED display with a screen resolution of 2160 x 1080 pixels and is powered by a 64-bit Meditatek MT6763 Octa-core chipset with a clock speed of 2.3GHz and ARM Mali-G71 graphic processor. 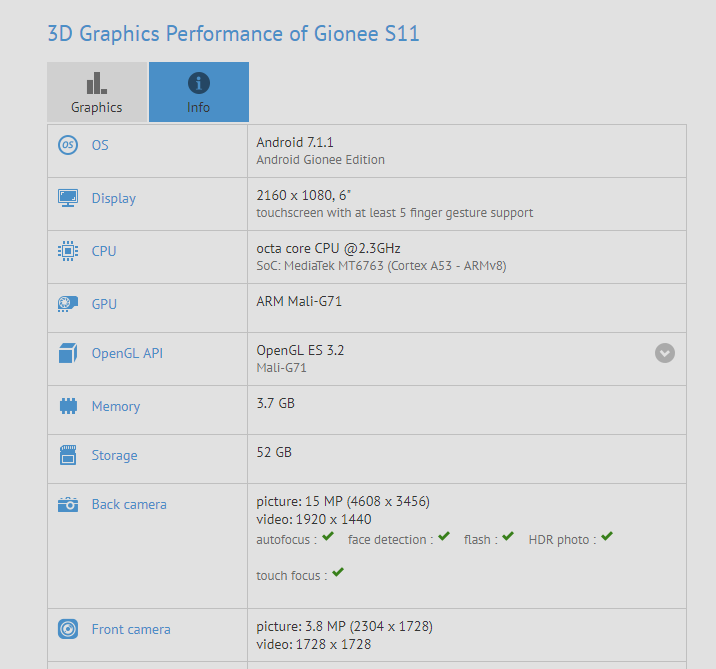 Expected to boot Android 7.1.1 Nougat with Amigo OS 5.0 interface out of the box, the device is packed with 4GB of RAM, 64GB of internal storage, but we are not certain  if the storage would allow for expansion. The phone unlike the S10 has a single rear camera- with 16-megapixels resolution and a 5-megapixel front camera. The listing made no mention of battery capacity, but we can safely assume nothing short of 3500mAh battery equipped with fast charging would be on board.

There is presently no information on design, price and possible unveiling date of the Gionee S11.

Previous Elephone S8 now $42 Off over at AliExpress

Next Coupon storm on Geekbuying is bringing savings up to 20 %