Early last week, Apple unveiled iOS 11 and now, Mixpanel, a third party analytics company has carried out a comparative analysis of all Apple’s operating system adoption by iUsers within the first week of their operation. Its results show that within the first week of operation, about 25% of iUsers adopted iOS 11. The adoption rate of this new OS is lower than iOS 10 which recorded 37% over a similar timeline.

Within the first 24 hours, 12% of iUsers adopted iOS 11 and this value consistently increased by 2-3% over the next seven days which brought the total figure to 26.57 after week 1. However, as of today, its adoption value dropped a little probably due to copious complaints about bugs. 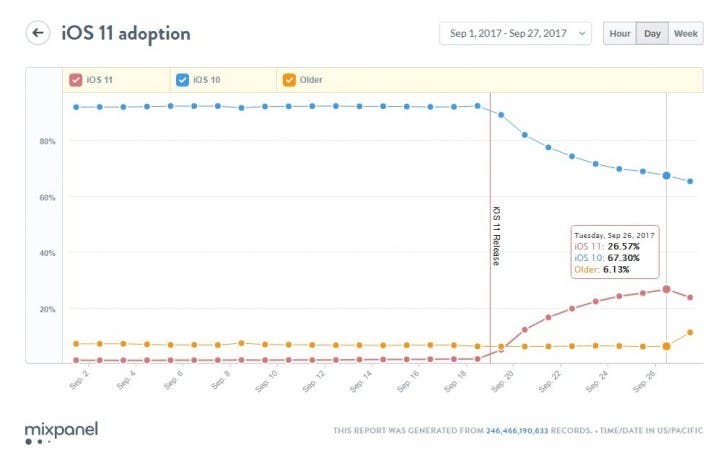 To address the issues, Apple released an update to iOS 11 after just seven days of operation. It is expected that this update would address all the concerns and the adoption rate should skyrocket.

Like I said earlier,  Mixpanel is a third party analytics company thus its analysis may not be a true representation of the official figures.

Previous LG K7i with "Mosquito Away" built in technology is official!