LG Q6, the otherwise mini or watered down variant of the flagship LG G6 has just landed in Canada.While it lacks basically all that makes the G6 stands out, its FullVision display, as well as the included rear-facing camera, makes it a preferred choice among competitions.

The device is now available to buy in Canada through various carriers including Telus, Bell, Virgin Mobile, Freedom Mobile, Videotron, and Koodoo at various price points.

A major highlight of the device is its 5.5-inch FullVision display with little bezels in favor of screen real estate resulting in familiar 18:9 aspect ratio and a display of 2,160 x 1,080 pixels.

Another major selling point of the mid-range Q6 is the 13-megapixel rear-facing camera that features OIS (optical image stabilization) that works perfectly well in lighted environments.There’s also a capable 5-megapixel camera on the reverse side, which should be good enough for regular selfies. 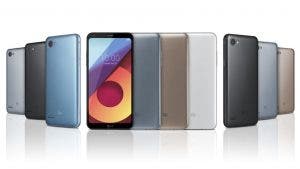 At the heart of the device is a Qualcomm Snapdragon 435 processor with 3GB of RAM and 32GB of storage expandable up to 128GB.It boots Android 7.1.1 Nougat with LG’s own custom user interface (UI) out of the box and lighted by a 3000mAh battery.

If you intend grabbing the mid-range LG Q6 in Canada, then you should be ready to part with as much as $449 CAD.The device is also available on all Carriers on zero down payment.

Previous Google Home Mini May Be Released On Wednesday

Next HTC U11 life Android One Phone -More details emerge