Finally, after so many days of leaks and speculation, the Huawei Mate 10 and Mate 10 Pro have finally arrived. The phones sport beautifully crafted 3D glass bodies, Huawei’s own in-house Kirin 970 processor and the usual Leica dual camera setup on the back. But what else is there to the Huawei Mate 10 variants? Let’s take a closer look to find out. 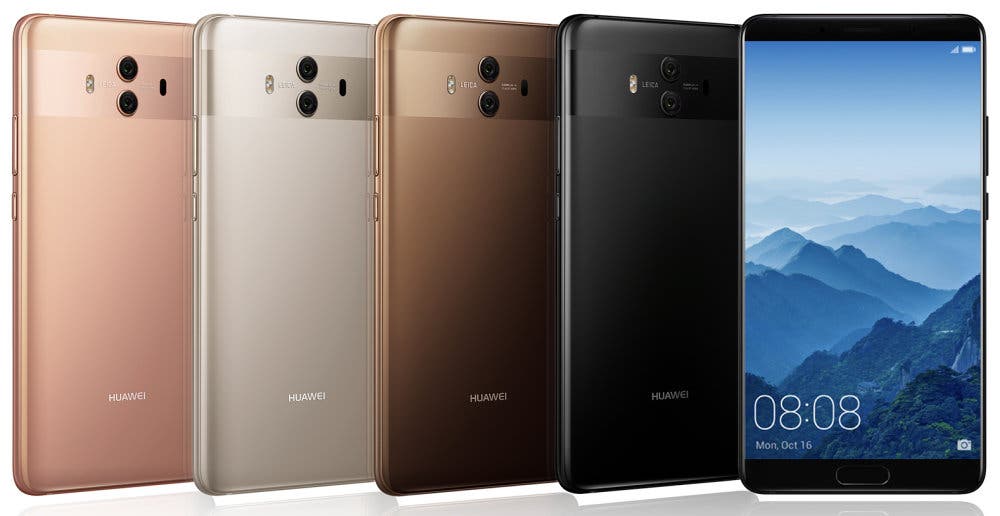 The basic variant of the Huawei Mate 10 will be powered by Huawei’s latest Hisilicon Kirin 970, as we’ve speculated for quite a few months now. The Kirin 970 may not give much of an upgrade in terms of CPU power, but it is much more . What Huawei is really proud of is the NPU in the Kirin 970 processor.

The NPU will supposedly be what will allow the devices to improve their speed and power efficiency. The dedicated mobile processing unit uses machine learning and works with EmUI 8.0 to get faster. This will also allegedly allow the device to stay fast during long term use. It’s important to note that this isn’t meant to let the device outspeed competition, but rather stay fast for much longer than other devices.

The Mate 10 rocks a Mali G72MP 12 GPU, giving it a huge power upgrade over the Mate 9. Previous Kirin devices always lacked the sheer graphical power other flagships had, so this is a welcome upgrade. The device will also be equipped with 6GB of RAM and either 64GB or 128GB of internal storage. 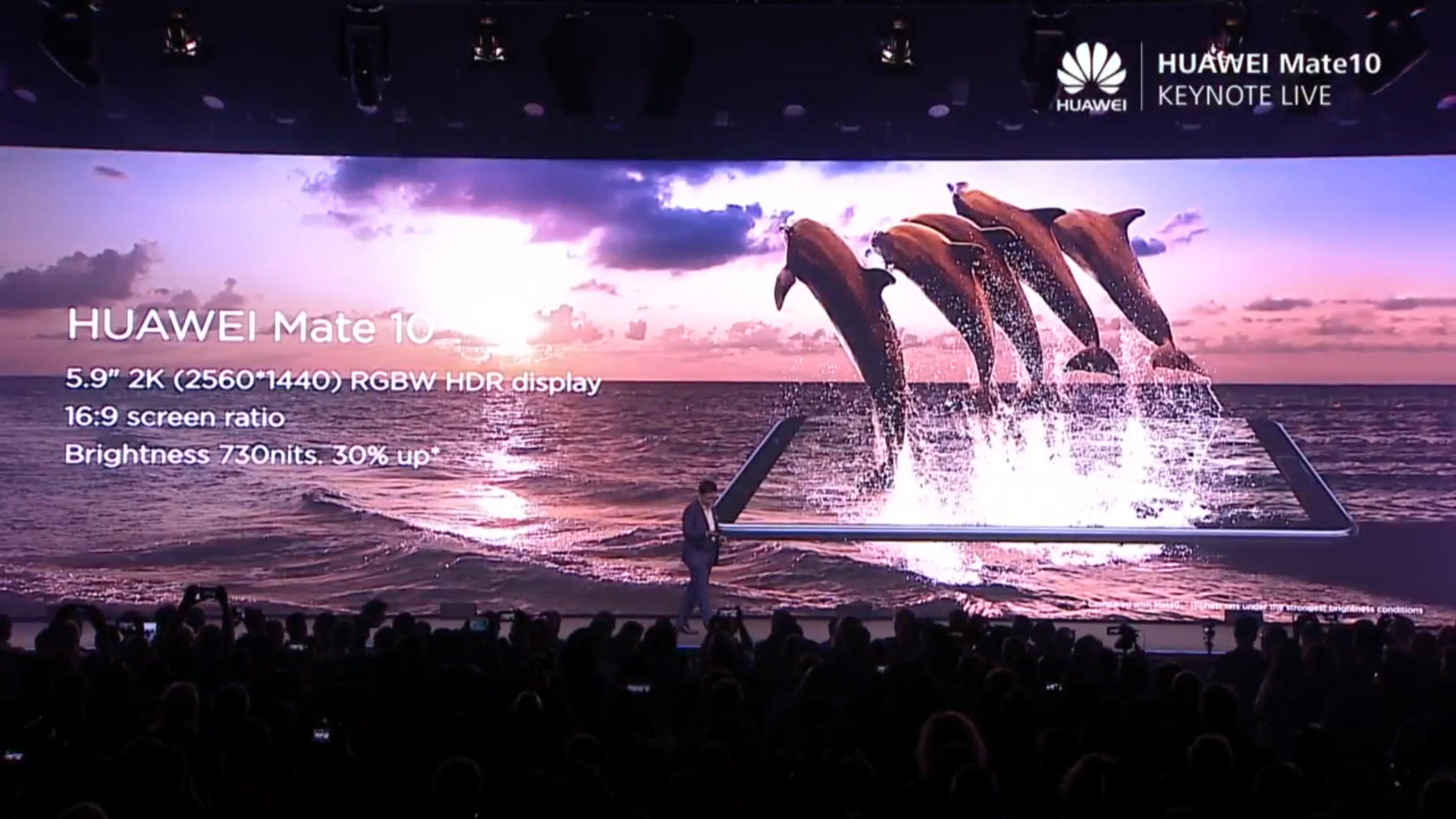 The display is, bizarrely enough, not a 18:9 display. That ratio has been kept exclusively for the Mate 10 Pro, though more on that later. The 5.9-inch display also has a 2K resolution, and has an impressive maximum brightness of 730nits. The FullView displays also support HDR, which should provide quite the impressive viewing experience.

Software wise, the Mate 10 runs on EmUI 8.0 which will work closely with the device’s NPU to produce faster performance. What was surprising however was seeing Google’s VP Jamie Rosenberg come on stage and tell us that the Mate 10 will feature a lot of Android Oreo’s features. Most important however was that the Mate 10 uses Google’s NPU API. This is quite big because it means app developers can tune their apps to work better with the Mate 10’s capabilities.

Aesthetically the phone has evolved a bit from its previous incarnation. The side bezels have been trimmed to an extreme degree, while the top and bottom bezels are very minimal. It definitely looks much more modern and up to date, though it’s not exactly bezeless. The fingerprint scanner has also been moved to the front, though it takes up very little space. 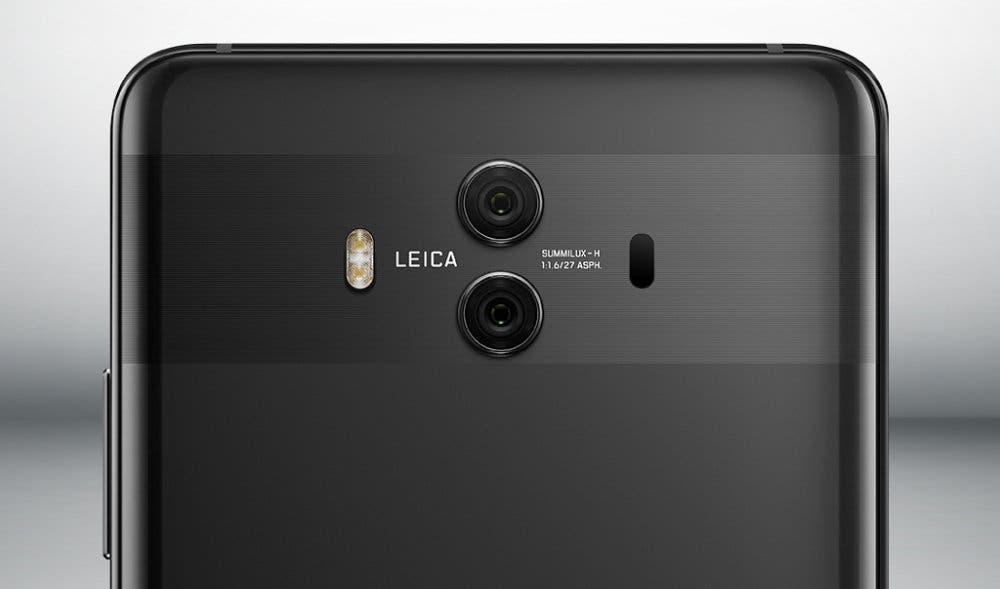 The rear of the device has also seen some changes since the Mate 9, though it’s still clearly a Mate device. The rear is now more minimalist and glass, though the location of the Leica dual cameras are still the same. There’s also what Richard Yu calls the ‘Signature Stripe’ on the back, a single strip that holds all the important camera elements.

The Mate 10 will pack a 4000mAh capacity battery, a fairly standard size for the Mate line at this point. SuperCharge is available to the device, and it can charge to up to 58% in 30 minutes. Huawei also made a big deal about how their SuperCharge technology is one of the safest on the market. The main focus of the device however is the camera package on display here. It’s simply quite impressive to see.

The Mate 10 features a dual 12MP RGB + 20MP camera configuration on its rear. These pair of cameras are once again engineered by Leica, and feature a slew of features. Among them are the f/1.6 aperture, OIS, PDAF, laser autofocus and a dual LED flash. One of the things they showed off the most however was how the smart AI in the device would recognize certain objects and scenes, then tune the camera accordingly. 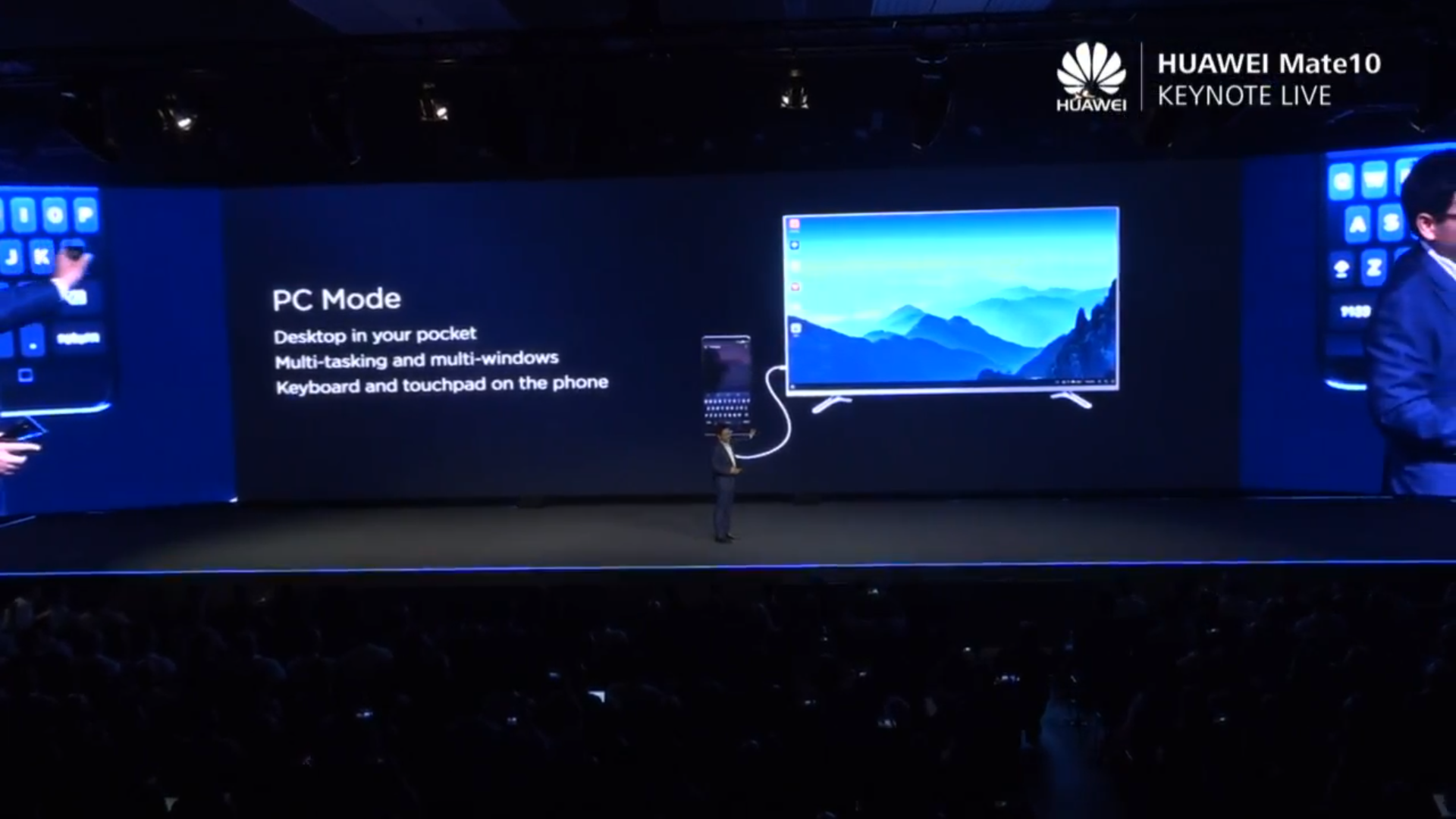 There’s also a very interesting feature in PC mode. Unlike how most devices with a PC mode work, the Mate 10 doesn’t require a dock. It only needs you to connect your phone to a monitor with a USB-C cable to use. You can connect a bluetooth keyboard and mouse to navigate, but the Mate 10 itself can be used to control everything. It’s quite impressive, and something I really look forward to seeing more of.

The device comes in a bunch of different colours, though the main thing to note is that the Mate 10 comes in a more business-like colours than the 10 Pro. The Mate 10 will be available in Champagne Gold, Black, Pink Gold and Mocha Brown.

The Huawei Mate 10 will come on the market costing 699 Euros, which is quite the price. It roughly translates to $825, which is fairly pricey. Though we do expect the actual price in other countries to be much lower as European countries are known to get the devices at much more expensive price tags. The device will be available for purchase in November.

The Huawei Mate 10 Pro is the upgraded version of the Mate 10, though it will still be powered by Huawei’s Hisilicon Kirin 970. As such, the device’s GPU is also the same Mali-G72MP 12 in the Mate 10. But the main thing is that the Mate 10 Pro will perform better thanks to its lower resolution display.

The Mate 10 Pro has surprisingly adopted a design more reminiscent of the normal Mate devices, with the fingerprint sensor on the back. Aside from that, the design is pretty much the same between the two devices. The Mate 10 Pro is longer thanks to it’s display ratio, but it’s also much more narrow. 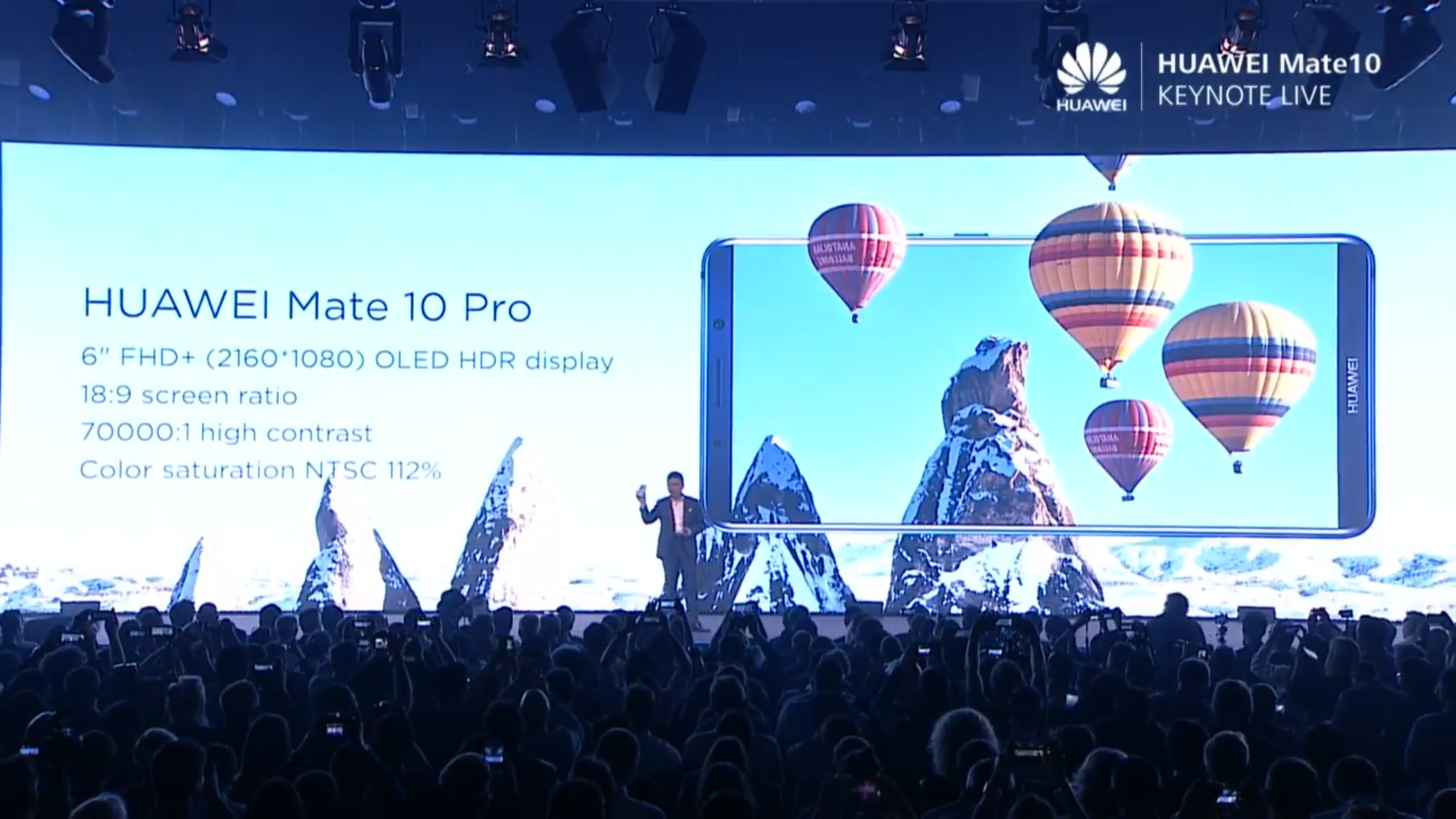 The Mate 10 Pro packs the same 4000mAh capacity battery as the standard Mate 10. Fast charging is available to the device, and the charging port is a USB-C port as well. the same SuperCharge fast charging is also here, and it’s still extremely safe.

The Mate 10 Pro has the same camera setup as the Mate 10. They come with the same resolution, features and image processing, as is expected. Really, all the features you can get on the Mate 10 are also available on the Mate 10 Pro. The main differentiating factor are the size, display ratio and display type.

For those of you who like a bit of colour in your lives, the Mate 10 Pro doesn’t disappoint. The device will be available in five colors, those colours being Titanium Gray, Mocha Brown, Pink Gold and Midnight Blue. If you though the Huawei Mate 10 was expensive, then the Mate 10 Pro’s 799 Euro pricetag might blow your mind. This puts it roughly at $943, though we once again would like to point out that European prices are always much higher than the standard price. The Mate 10 Pro will also be available starting this November.

This covers every single first-wave launch market for both of the Mate 10 devices. Now that it’s all over, what do you think about the Mate 10 and Mate 10 Pro? Are they impressive devices, or did they fail to live up to the hype? Are they overpriced? Can they compete with other devices like the iPhone X and Galaxy Note 8? Tell us down in the comments section below.

Next Blackview S8 Promotional Event Kicks Off - Only $149.99