Huawei officially introduced the much talked about Mate 10, mate 10 pro and the Mate 10 Porsche edition at an event in Germany just yesterday. These phones pack some very respectable internals as well as designs and as such doesn’t come cheap. Today in Germany, Huawei has added Huawei mate 10 lite to the mate 10 line up.The Mate 10 lite actually made several appearances to the rumor mill, but not a word was said about it at the event yesterday, the device is now listed on the company’s official website.

The mate 10 lite as you would probably imagine is a toned down variant of the Mate 10 pro, mate 10 and mate 10 Porsche and costs less. Specifically, Huawei Mate 10 lite now run on  Android 7.0 Nougat with EMUI 5.1 out of the box, but  it is tipped to get Android 8.0 Oreo soon and is powered by a less capable octa-core Kirin 659 SoC and so lacks the artificial intelligence of the other siblings.

The device flaunts a 5.9-inch 18:9 screen with a resolution of 1080 x 2160 pixels and minimal bezels by the sides.Working side by side the Kirin 659 system chip is a 4GB RAM and a 64GB storage of expandable storage, but you will have to choose between using a second SIM and a MicroSD card.The device is powered by a smaller 3,340 mAh battery with quick charge.

To spice up the mate 10 lite, Huawei has thrown in four cameras into the mix – a dual rear and dual front camera. At its rear, you will find a 16-megapixel and a 2-megapixel camera combo that can capture beautiful photos with a bokeh effect, and upfront, you will find a 13-megapixel+2-megapixel combo which works in a similar manner to the rear setup. 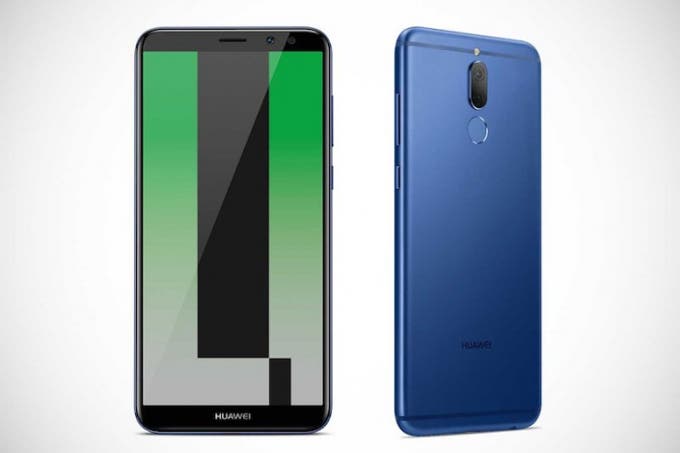 The mate 10 lite is expected to hit the shelves in Europe later in November at €400.You will have to choose from gold, graphite black, and aurora blue color options.