It seems that the wait is almost over for some of the fans of Xiaomi, as the official MIUI Team recently shed some light on the process of launching the MIUI9 Stable Version to all compatible devices. In case you don’t remember, it’s been almost 3 months after the official announcement of MIUI 9 by the Chinese company (it was unveiled along with Mi 5X model back in July) and since then several Developer ROMS have been made available for Xiaomi fans, but still no Stable. 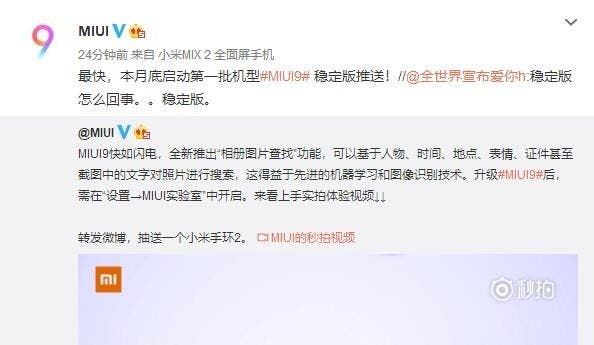 Earlier today however, the official MIUI Team posted a news on their Weibo account, that the first MIUI 9 Stable ROM is almost ready and it should become available to the first batch of Xiaomi phones until the end of this month.

The company has spent countless hours testing this ROM, as there are more than 300 million MIUI users and the company said that it wouldn’t be serious to risk and launch an unstable version. According to rumors, the first batch of phones to get the first MIUI 9 Stable update should be:

… with more to follow in the coming months. As always all of the above are confirmed information, but in no way official announcement, so relax, breath in/out and wait for something more concrete.