The Google Pixel 2 and Pixel 2 XL have been released only recently, with the pre-ordered units just getting to their destination. Within one month of the unveiling of the second generation Pixel phones, rumors and gossips about the 2018 iteration of the pixel phones (Pixel 3) are beginning to filter in.

As per reports obtained from Droid-life, three Google Pixel phones, as opposed to the current 2 models, are to be expected in 2018, and it appears internal work on these devices are already in progress. Information obtained by our source revealed that Google has decided to name the three 2018 Pixel phones as Crosshatch, Albacore, and Blueline.

It is said that the next generation of Pixel phones will come with huge internal and designs upgrade over the Pixel 2. The report alleged that Google may end up referring to these devices simply as A, B, and D just to keep them secret.

The report has it that two of these devices will be considered “premium,” while the third could be a high-end variant. Cementing the alleged Pixel 3 codenames, a further search in the comment for an AOSP listing for Pixel devices revealed that “crosshatch” was mentioned in relation to “sailfish” and “marlin” that are codenames of first-generation Pixel phones. 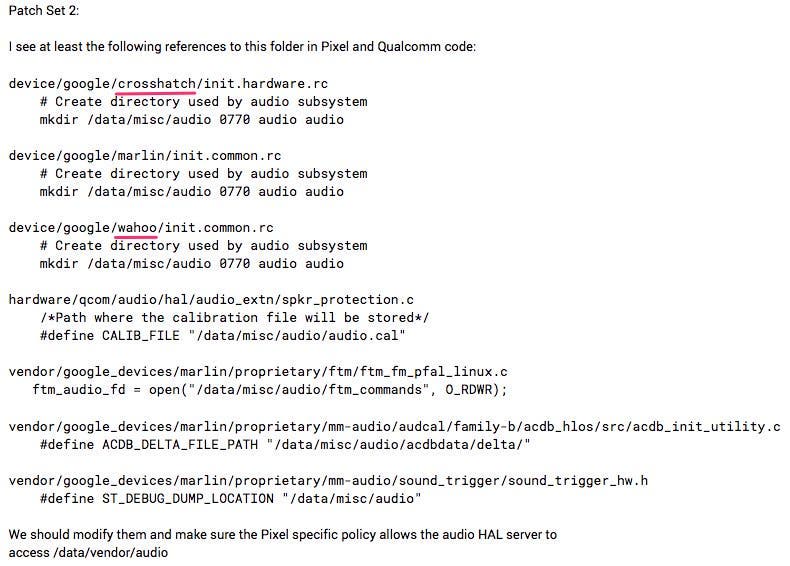 As you can see from the image above, an unknown “wahoo” device was also referenced, but we are not sure of what device bears the wahoo codename, but may not have anything to do with 2018 Pixel line up.

For now, we have no information on what these pixel devices with the codenames could bring in terms of specifications and features. The Pixel 2 phones have only just been unveiled, so we have about a year till it is eventually released. Until then, we expect to get series of leaks and rumors regarding the Pixel 3 phones. However, it may be too early to take this report with all seriousness, so we advise you take them as rumors until we get some concrete information.