The OnePlus 5T has been the subject of rumors and leaks for a while now with reports popping up every other day. The latest report is a screenshot from the benchmarking tool, AnTuTu. 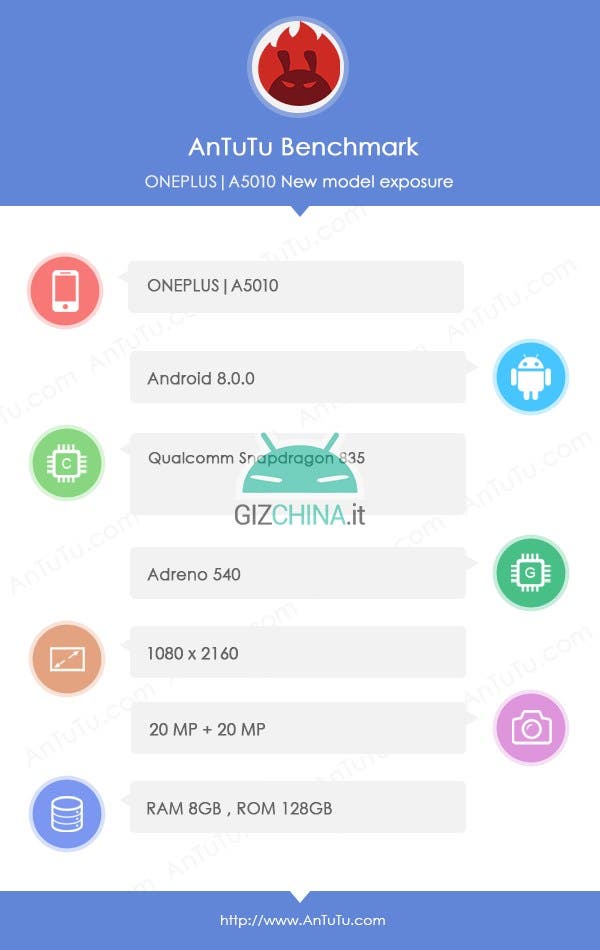 The OnePlus 5T will be the successor to the OnePlus 5, much like the OnePlus 3T was to the OnePlus 3. The screenshot gives an overview of the specs that the 5T might sport. The model number of the phone in the benchmark is A5010, as opposed to A5000 on the OnePlus 5, indicating that the phone might be a successor. The phone sports the Qualcomm Snapdragon 835 chipset coupled with 8GB of RAM and 128GB of ROM. On the rear lies a dual camera setup of two 20MP sensors. The phone is rumoured to sport a bezel-less display with an aspect ratio of 18:9. It will run Android 8.0 Oreo out of the box.

The OnePlus 5T is expected to make an appearance anytime in the coming months. The launch seems imminent as in many countries the OnePlus 5 is out of stock. The OnePlus 3T was and still is one of the best phones out there. Will the OnePlus 5T make the same impact as the successor to the OnePlus 5? Watch this space for more!